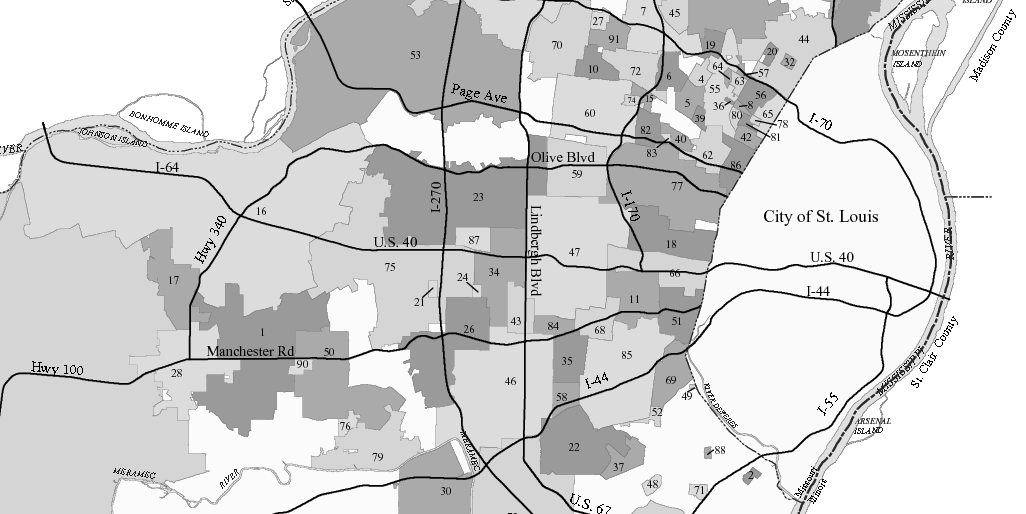 I attended a forum at UMSL called “If the City Reentering the County is the Solution, What’s the Problem?” The problem became clear to me at that forum- it’s low self-esteem.

That was 2011- long before our region made international news in the aftermath of the Michael Brown shooting. Since August 2014 we’ve learned how our most disadvantaged neighbors are treated by the fragmentation machine. Otherwise insolvent municipalities survived the recession through tickets and fees. They barely make payroll while the sleeping giant of mounting infrastructure liabilities grows.

Now the Rams are leaving. While I vehemently disagreed with the $100Ms in direct and indirect tax subsidies in excess of even what has become custom for the region, the deal was weaker because only the resources of 11% of the region were mustered.

Awareness of the problem is at an all-time high– too many horses pulling the cart in different directions, all needing to be fed. It’s time to put forth ideas to reform our governance system so that it works better for more of us, discuss, and evaluate them. Are we going to wait for the next shoe to drop before we do something about it? A major employer leaving? Another bad census?

The McNarys put forth a borough idea last week. Three less dramatic changes would go a long way to strengthen St. Louis and have a better chance of happening. TIF reform, significant municipal consolidation and disincorporation, and the county annexing the city.

The granting of TIFs needs a more regional view. The Kroenkes of the world exploit fragmentation and the sales tax chase it promotes. In 2012 Sen. Scott Rupp and Rep. Anne Zerr introduced HB 1693 to make it harder for a municipality to override a county TIF commission’s denial. The legislature should revive and pass it.

Sen. Eric Schmitt’s SB 5 (and his follow on SB 572) capped the dollars from tickets and fees that helps prop up fragmentation. Let’s support anyone seeking consolidation and disincorporation among county municipalities. Rep Bob Burns’s HB 1686 would make disincorporation easier.

The county should annex the city while it remains a municipality. The two biggest issues for the city are crime and schools. Neither is helped by the city being its own county. The county would do the county roles for city residents and they would pay county taxes. The Public Health departments should combine too. Whether the county comes out ahead depends upon how efficiently it can deliver those services to city residents. The county council should add two seats to represent city residents until reapportionment occurs after the next census. While this only rids the region of one of its numerous governments, it removes the biggest psychological hurdle.

County annexation of the city can occur via a state-wide amendment vote put on the ballot by the legislature or initiative petition or locally via the Board of Freeholders. The BoF is a mechanism designed by 19th century elites for elites. It’s been litigated to death in the past and will again if tried. An amendment can accomplish annexation, get rid of the BoF process, and preserve the extraordinary flexibility in organizing our local governance already in the constitution.

At that forum in 2011 an audience member joked that this was this generation’s opportunity to fail at this issue. Is that the legacy we want to pass to future generations of St. Louisans, failure? We don’t tell the entrepreneurs creating start-ups to give up in the face of defeat. Future success requires shedding the baggage of the past. The world isn’t waiting around for us.