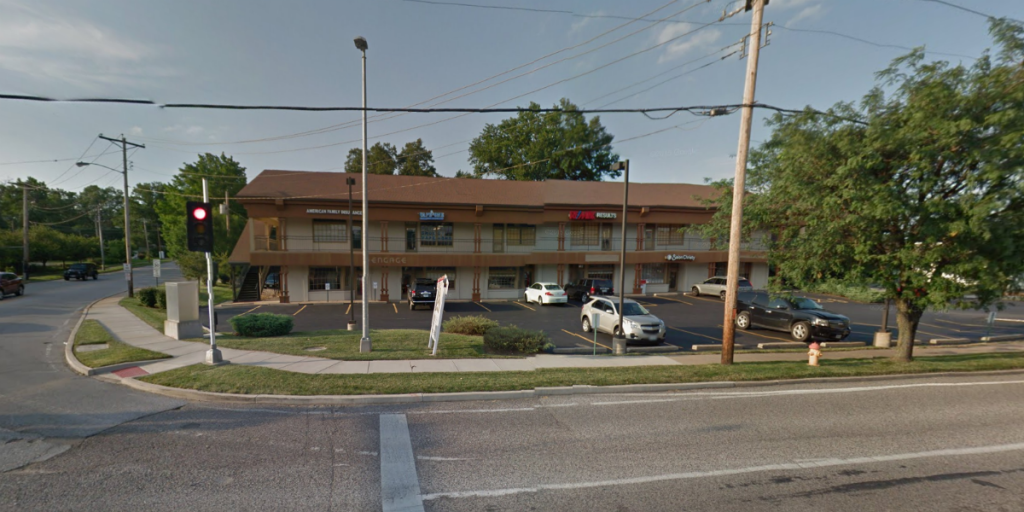 nextSTL has learned Regions Bank plans to redevelop the northeast corner of Bopp and Manchester Roads in Des Peres. The site, at 11803 Manchester, owned by Noles Property, is located immediately west of a Reliance Bank branch. In April of 2015 Des Peres denied a request to operate a drive-thru Starbucks coffee shop inside the Reliance facility, also situated along the congested Manchester Rd. commercial corridor.

In May of 2015 Reliance appealed Des Peres’ 5 to 1 rejection of its Starbucks plan. Several residential neighbors cited a potential for traffic problems and trash among their biggest concerns. A hearing regarding the appeal is scheduled for 1pm today in St. Louis County Circuit Court Judge Steven Goldman’s courtroom.

The Des Peres Regions Bank will operate out of a two-story, 8,500sf building facing Manchester Rd. The first floor will be utilized for general banking services. The second floor will have a dedicated entrance with an elevator off the east side of the building. It will contain Region’s regional offices for mortgage and investment services. According to Regions, the Des Peres branch will be the most technologically advanced in its entire system.

One manned drive-thru lane, along with four other drive-thru lanes will be placed as far from residential areas as possible. Non-manned lanes will include either a standard automated teller or have video teller capabilities. Additionally, the project will feature a 6ft to 8ft screen wall that will mitigate parking lot and traffic light along the residential border to the north.

The planned Regions development will also include 41 new parking spots, and will require demolition of a two-story, 12,348 sq. ft. strip mall on the site. Two residential properties on neighboring Vinetta Dr. will also be demolished. Fifteen trees in the development zone are expected to be preserved.

The new bank building will be contemporary in design with a majority of glass into the public areas. Other expected finishes include brick, some stucco, and two types of composite metal panels. Visitors will enter via present entrances along Bopp Rd. and Manchester Rd. The Vinetta Dr. entrance will be eliminated.

Traffic study results provided by Regions Bank conclude that the proposed bank facility would be expected to generate a net increase of approximately 35-45 trips over the existing retail building when fully utilized. The development is also planned to exceed Des Peres landscaping requirements, and will include storm water quality improvements to filter contaminants from runoff.

Reliance Bank opened a Tim Hortons coffee shop in August at its Frontenac branch at Lindbergh Blvd. and Clayton Rd. Another planned Tim Hortons and Reliance development, at the northeast corner of Clayton and Ballas roads, was voted down 5 to 2 in July by Town & Country.