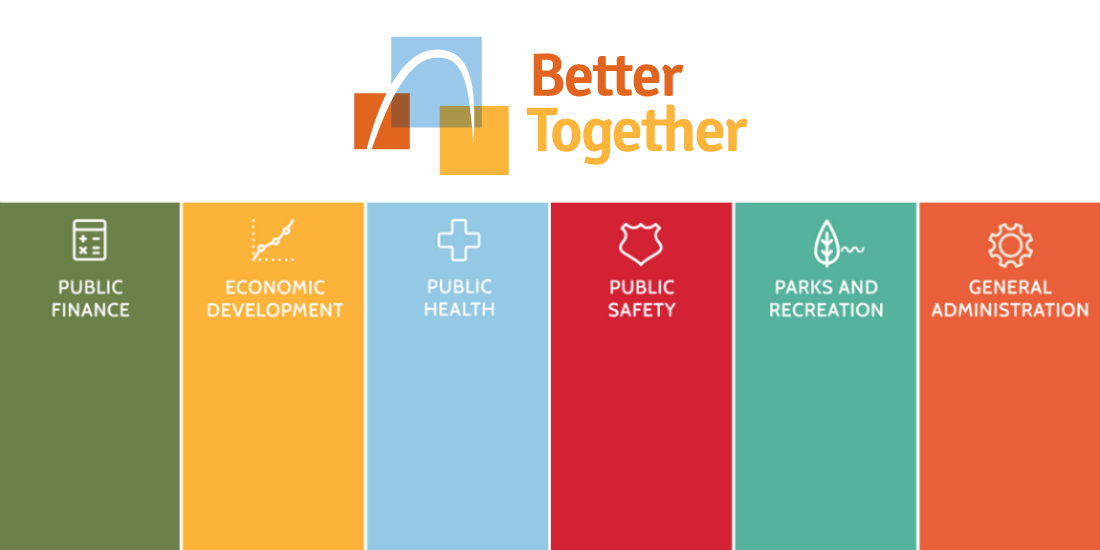 As a 60-year resident of the St. Louis region, and therefore someone highly invested in this place and its future, I’ve been following with great interest the studies produced by Better Together. The data-driven approach and rigor of the reports lend significant credibility, and I’ve been pleased to see Better Together’s work cited by other groups, from the Arch City Defenders to the Ferguson Commission to the United States Department of Justice.

So, it was with some surprise and disappointment that I encountered a new not-for-profit organization spawned from the St. Louis County Municipal League, which represents St. Louis County’s 90 municipalities and has a vested interest in the preservation of those towns and cities, regardless of the cost to the region. The group, CitiesStrong, describes its goal as to “preserve and improve local governments in St. Louis County” and “…counteract an inaccurate narrative that seeks to eliminate viable local governments or that proposed that municipal services can be provided more efficiently or effectively as a result of consolidation or merger”.1

The municipalities’ group just issued a new report that questions the veracity of a report that Better Together issued 18 months ago, comparing the cost of local government in St. Louis to the cost in Indianapolis and Louisville. I found that report quite compelling at the time, as it laid bare our region’s significant overspend when compared to similar regions such as Indianapolis and Louisville. Better Together found that St. Louis residents were spending between $750 million and $1 billion more each and every year than residents in Indianapolis and Louisville – and for the same basket of municipal services. The munies’ report was prepared by Mark Tranel from the University of Missouri-St. Louis’ Public Policy Research Group.

Tranel and the munies say Better Together’s study is flawed because it excluded hundreds of millions of dollars in Indianapolis spending. He’s right—Better Together did exclude hundreds of millions of dollars. But that exclusion made Better Together’s report more accurate, not less. Indianapolis’ municipal government spends hundreds of millions of dollars operating hospitals, nursing homes, and stadiums. St. Louis does not operate hospitals, nursing homes, or stadiums, so those expenditures were removed in order to provide an apples-to-apples comparison that was both accurate and fair. On the flip side, St. Louis’ local governments operate airports and water systems, and Indianapolis does not, so that spending was excluded from St. Louis’ total. The report and its appendices make it clear that researchers at Better Together took great care to make the comparisons as rigorously accurate as possible.

To be candid, I am disheartened and rather disgusted by the muni groups’ response to Better Together’s work; their defensiveness is both belated and short-sighted. It is very unfortunate that much of the leadership of St. Louis County’s municipalities is still unwilling to participate in an honest discussion about ways we could change to benefit taxpayers. Even in this belated whimper about an 18-month-old study, the group states that “there was no explanation by Better Together for why the more complete and correct information was not included in its study.” Even this trivial swipe is untrue. The author of the report—Mark Tranel—met at length with Better Together researchers and was provided information on every single piece of data that went into Better Together’s report. Even if Tranel had not been afforded these opportunities, he (and all of the public) could view the data at www.bettertogetherstl.com.

The continued defensiveness from municipal leaders is discouraging and counterproductive. Over the past two years, the Arch City Defenders, Better Together, the Ferguson Commission, the Missouri General Assembly, the St. Louis County Council, and the United States Department of Justice have raised concerns about some operations in some municipalities. And yet: Municipal leaders continue to circle the wagons, cast aspersions on every critic’s motives, and do nothing to remedy the problems that are revealed. Instead they malign their critics and spend more and more tax dollars to defend the system from which they profit. This St. Louisan has had enough, and I suspect I am far from alone. Now is the time for difficult conversations. Now is the time for insightful questions that lead to answers. Now is the time to take a hard look at a system that is, in some places, very broken. The work by Better Together and other forward-thinking organizations only helps us move toward a more livable, equitable, prosperous region.

Mike is the President & CEO of Gundaker Commercial Group, a full-service commercial real estate company providing brokerage, asset management and corporate services. He is a 60-Year Resident of St. Louis.