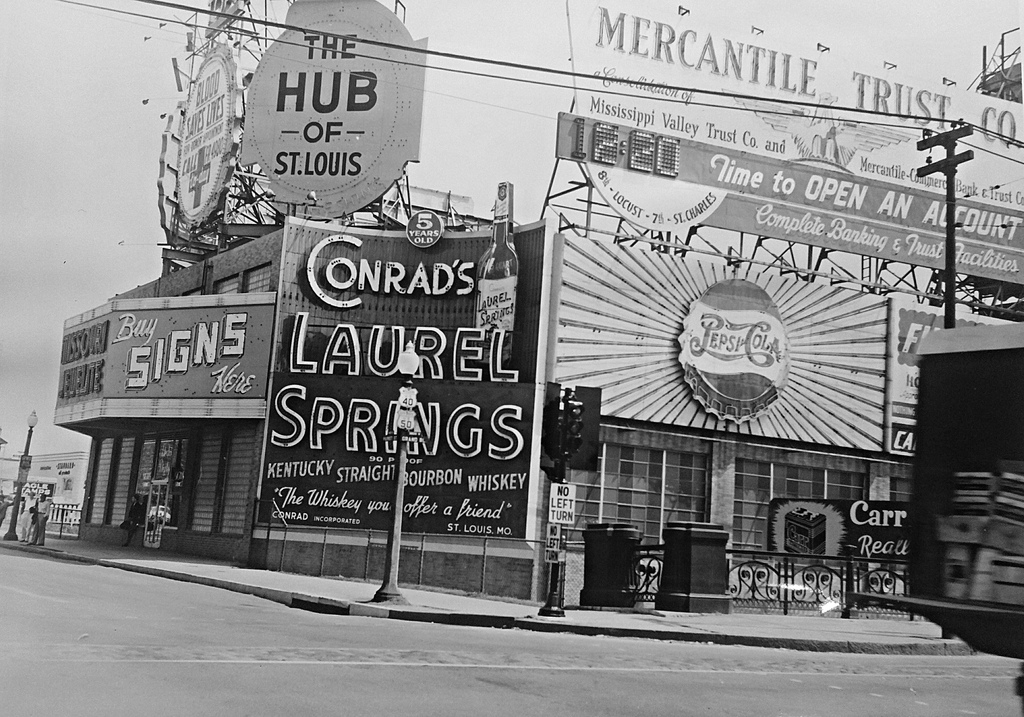 The building itself was an advertisement. A theater marquee crossed the front of the building above the bold double doors facing Market Street. A series of signs faced Grand. At the corner, a huge sign advocated for Conrad’s Laurel Springs 6-Year-Old Kentucky Straight Whiskey… “The whiskey you’d offer a friend.” 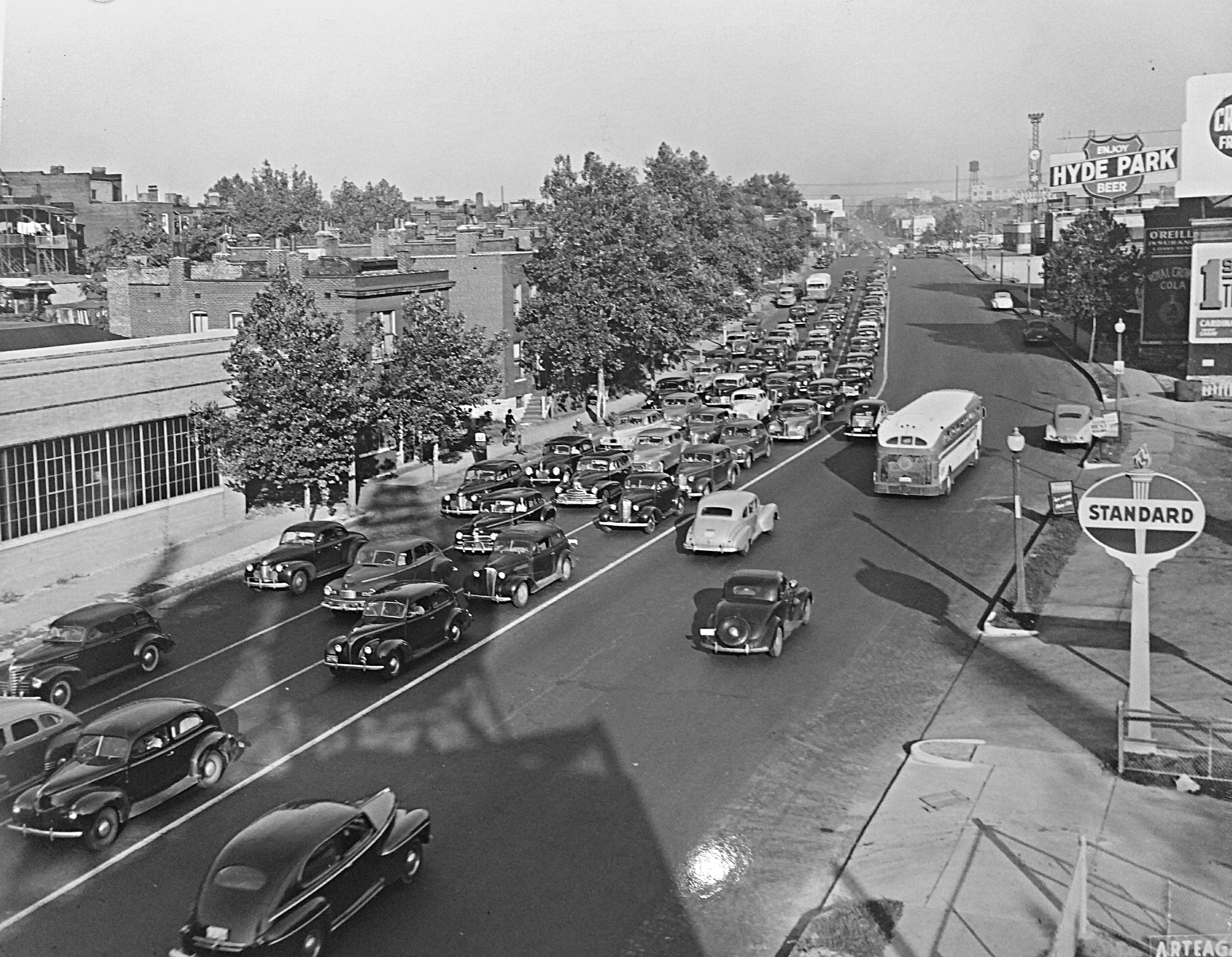 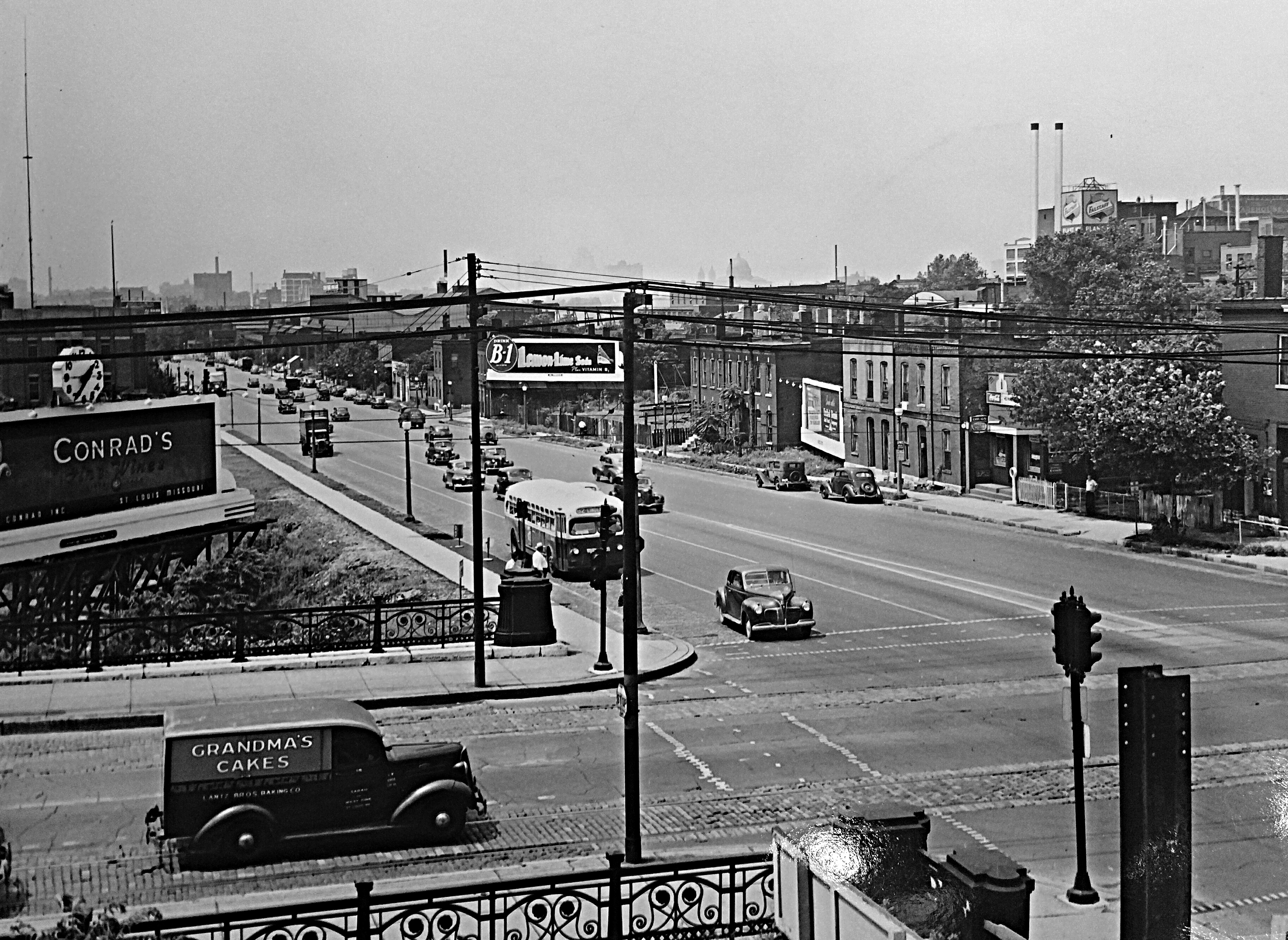 And the building stood tall for its stature of just two stories, for atop the roof stood a steel superstructure thirty feet tall supporting three more massive oversized signs — giant bottle caps — each bottle cap fifteen feet tall. These beer tops tansformed the building into an icon of one of St. Louisans favorite beers, a major part of our brewing heritage.

As afternoon turned to dusk that June day in 1948, the drivers packed bumper to bumper along Market Street in Midtown could see the Missouri Jewelite Building from a mile away. As night fell, all of the signs burst into light with the brightest and most advanced electric lighting ever available. Missouri Jewelite knew; they held the patents.

While Europeans were still picking up rubble from the war, St. Louis was living in the future. The Missouri Jewelite Building seemed to glow as if it had landed from a distant star. 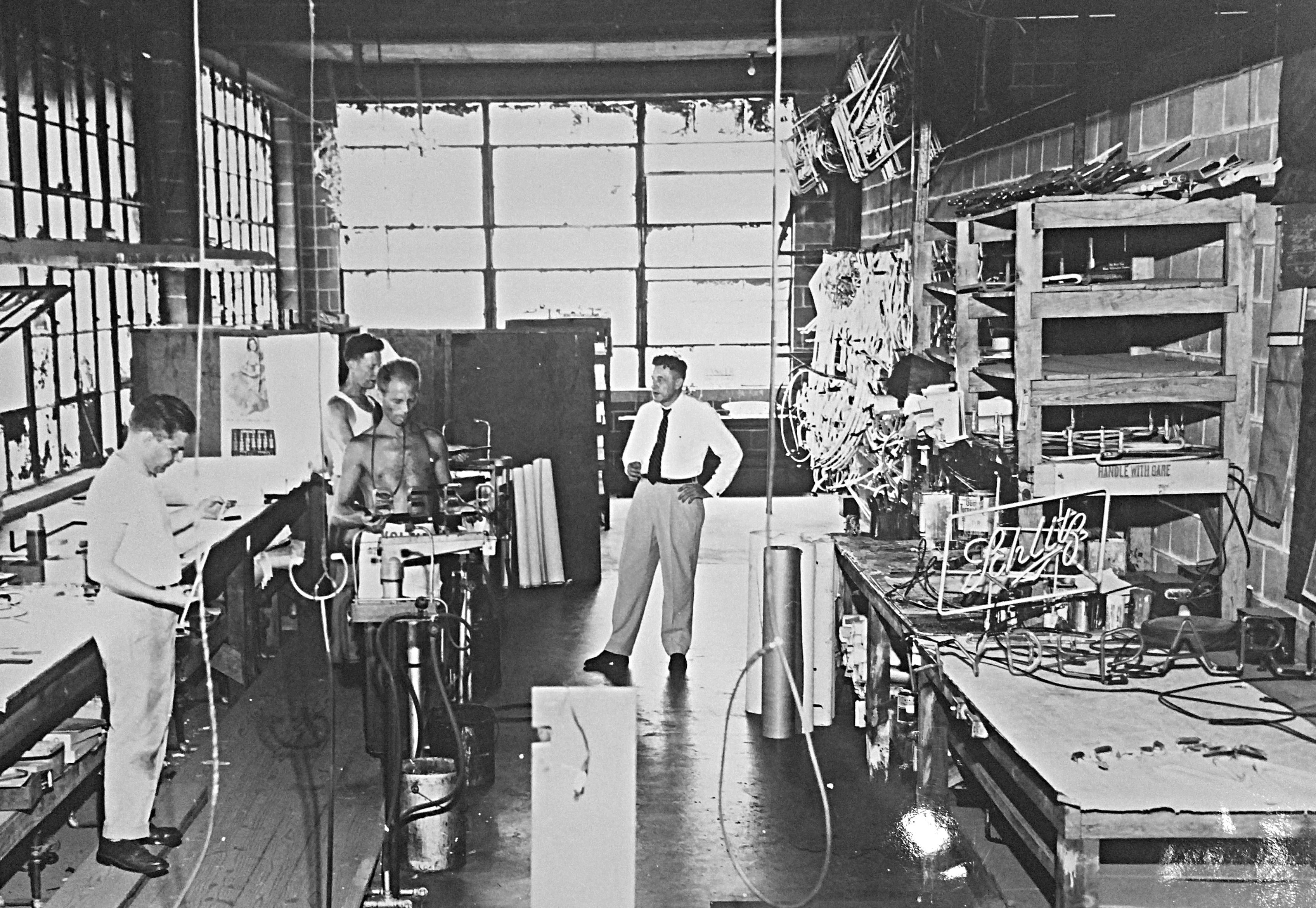 But the future did not remain so kind to the building at Market and Grand.

The first humiliation came in 1955. By February of that year, the city had removed the pavement from Market Street and had begun excavating an underpass that would carry Market Street beneath Grand. Suddenly, the Missouri Jewelite Building’s front doors were ten feet directly above the street. And that street was no longer an avenue with traffic signals and wide sidewalks. It was becoming a fast tunnel of traffic, an underpass to keep traffic flowing in and out of the city. Instead of fronting two major avenues, the Jewelite Building opened onto neither. Grand was now a bridge. Market was in a trench.

So the folks at Missouri Jewelite did what they had to do. The added a balcony across the front of their building, ten feet above the speeding traffic. The balcony led from their double doors below their marqee to a passageway back to the alley to the south.

It must have seemed things would be well after all.

By September of 1955, however, it appeared another humiliation awaited the building at Grand and Market Street. By that September, both the City and the County were moving to link up the Daniel Boone and Red Feather Expressways with downtown. The plan involved turning the portion of Market Street at Grand Boulevard into a highway. 3562 Market Street would no longer be on Market Street. It would front a highway.

It seemed Missouri Jewelite would lose its alley too for the city of the future. Plans were set in motion to add an exit ramp from the expressway to connect it to the remaining portion of Market Street to the east. That ramp would be excavated just to the south of the Missouri Jewelite Building. Now the back of the building would be well above grade, as well as the front. The building would be surrounded by a moat of highways. The only access point would be from a driveway extending off the highway exit ramp.

But the sign company stayed in business. They were in this to stay. Signs were their business.

But the future did not grow brighter. Further humiliation would come within a decade. In March 1963, the St. Louis Post-Dispatch ran renderings of a newly expanded Highway 40, a highway of tomorrow for a new St. Louis, the new Interstate 64.

One diagram showed a second level added to the highway through Midtown. The highway’s eastbound lanes would run though the trench underneath Grand. But now the new westbound lanes would float above Grand on an upper deck. The rendering showed the Grand interchange, the double-decker Interstate and — in one corner, lassoed by the exit ramp, sitting alone and ashamed — the Missouri Jewelite Building.

In fifteen years, one of the most visible commercial buildings in St. Louis had lost everything. From then on, those bold double doors beneath the marquee would swing open onto a balcony in perpetual darkness, sandwiched between two layers of interstate. 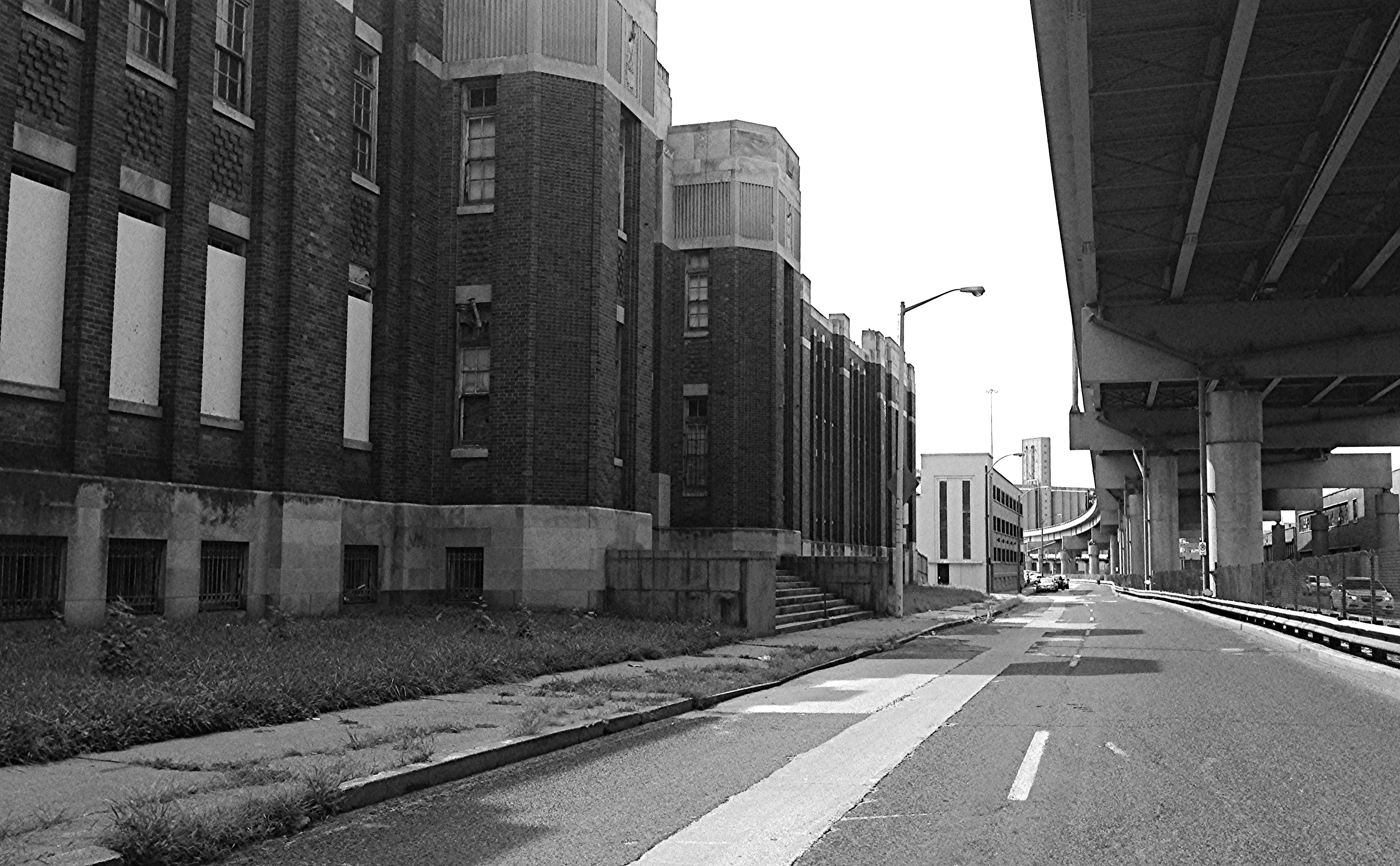 It is amazing that such a building has remained standing in such circumstances for another fifty years. Today, the building seems all but abandoned. The more recent building to its rear burned in 2013 and was later demolished. The Armory still stands a block to the west. It’s block of Market Street still exists as a narrow service road abutting the highway.

Yet for all of that time, the most humiliated building in St. Louis has been one known to everyone, but somehow truly noticed by few. In 1962, the gigantic Alpine Brau bottle caps were lowered from the roof and rolled away for the rest of time. In their place, Missouri Jewelite erected an electrified, lighted, neon eagle with wings and the word “Budweiser.” It’s on the roof, so you can only see it well from the highway.

Signs were their business.