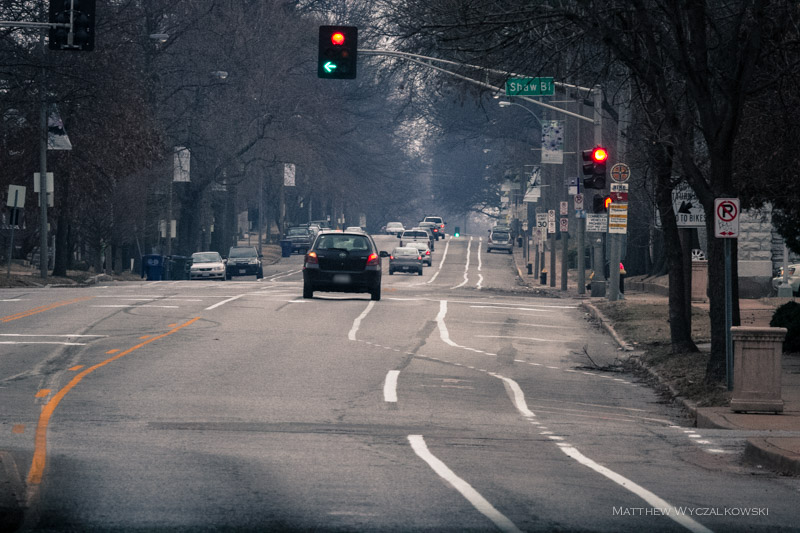 It was moments ago, at roughly 1:15 p.m. on Monday, July 6, that I enjoyed my first, to-the-bone, all-encompassing-drenching experience as a commuting cyclist. Riding only from Kingshighway to Grand, what started as a drizzle ended in a near-drowning, with the best moment of the ride coming at the corner of Wyoming and Grand; there, a young couple pondered a run to their car from the doorway of Lulu’s Local Eatery. I looked over at them. They looked over at me. Then, they walked right back inside.

To date this summer’s been a weird one, full of rainstorms that come suddenly and then linger for hours, like univited houseguests. It’s been a bit of a drag, a different reality than the sweat-it-out-summer I’d planned. But there’s been a far more annoying aspect to this transportation and lifestyle change: rudeness. When I hear about St. Louisans and their legendary friendliness, these days I wonder where that rep comes from; and, frankly, I’m wondering if it’s me allowing isolated incidents to become “a thing” in my head, or if there’s really something to be said for seeing the world differently from the seat of a bike.

In the span of a few weeks, I’ve come across an actual list of situations that’ve caused some anxiety. One: a car passing too closely on Arkansas, as I rode to work; I followed this one as far as Shenandoah and Compton before giving up the chase. What did I plan to do when catching them, anyway? Two: walking my bike into an intersection, with the walk signal, only to have a van pull between me and the sidewalk. Minor words exchanged. Three: more words exchanged, this time with a trio of goobers who were insisting that I’d stolen their bike. Four: a car window lowering, the young passenger making eye contact with me as a I waited at the corner of Gravois and Cherokee.

It wasn’t a surprise, but still rankled, when the kid flicked his cigarette at my feet. Five: various hoots’n’hollers at night from pedestrians, none of whom necessarily provided a threat, but did cause at least a moment of… what? Concern? Worry? Hard to say, but radars go off and take a minute to turn off in the brain. I don’t like it.

That most of these took place within a mile of my house makes me a tad paranoid. Is the world in my immediate neighborhood a more agitated, edgy place than I imagine? Is it just a matter of seeing things from two-wheels, rather than four? And if this is what I get as a middle-aged, average-looking dude, is it worse for women? I’d guess so, I really would. But what do I know?

So, I’m asking. Is it just this weird for me? Is it this way for you, other cyclists in this town? Or am I just living in a pattern, in which a behavior’s boomeranging a bit?

My response since that kid flipped a spent smoke at me has been simple. Wave more. Smile more. Nod more. Say “hello” more. The mix of responses is, in fact, a real mix. There are some blank stares, but a lot of positive vibes come back, too. Sometimes, the look or comment is a quizzical one, the person surprised that another human being’s taken a moment to acknowledge that shared space between.

Please don’t assume that I’m pretending to change the world here. This is as much an experiment on myself, as on anyone. I’m not a social creature by nature. But as a human on two wheels, moving through a shared space, it’s a neat trick to keep the mind and spirit just a little more active, that moment of attempting to share a bit of kindness.

Maybe, one before the other.