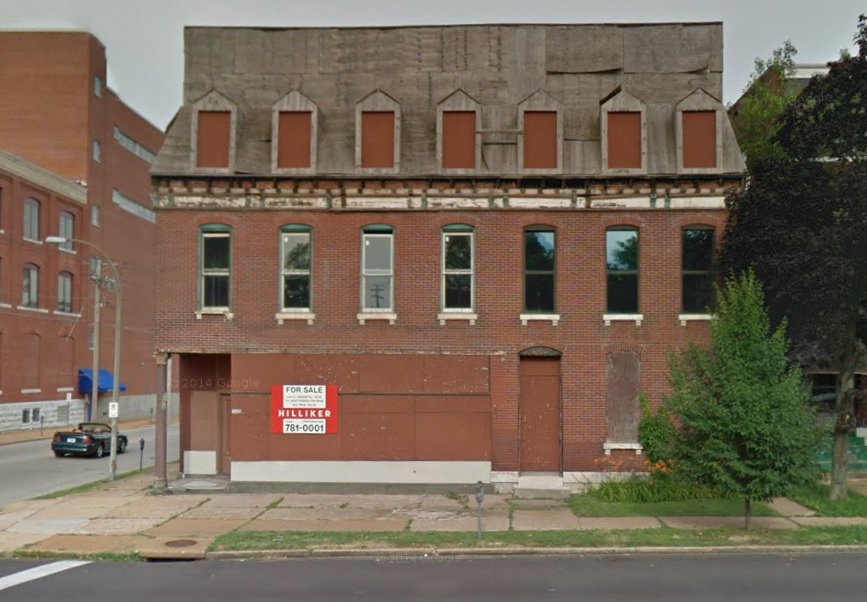 A Marine Villa corner building with a troubled past may soon be rehabbed by its owner. The building is located at 3600-02 S. Jefferson, just south of Concordia Publishing. The new owner, Sam Meller, has applied for a $160,000 permit for interior/exterior alterations of the building, which will become four residential units. That building permit has not yet been issued.

In January 2012, news broke that Concordia Publishing would seek to demolish 3600 S. Jefferson to provide a green space for its employees. Ultimately, the company did not prevail and the Preservation Board denied the demolition, and so Concordia never purchased the structure. Read here for the Landmarks Association write-up protesting this intended demolition. Even prior to demolition threats, the building was troubled. A botched rehab attempt by DHP Investments in 2005 left the building structurally questionable, with its roof line raised in an inappropriate and potentially unsafe manner.

Below is a Streetview capture of the building that shows some of the faulty work on the third story: Recently, re-tiling work was completed on the building’s mansard roof, preserving this odd configuration. Perhaps any structural issues have been addressed and the building is ready for a full rehab.

Click here for a profile of owner Sam Meller published in the St. Louis Post-Dispatch in 2012.