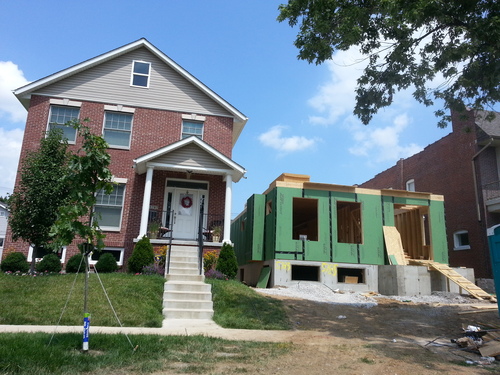 Four new single family homes will be constructed atop vacant lots at 5792, 5795, 5796, and 5798 McPherson Avenue in the Skinker-DeBaliviere neighborhood. The owner is McPherson 2001 Land Company. Four building permits each valued at $100,000 were issued to contractor Martin Jaffe this week.

The homes will likely be identical to the others built on the 5900 block of McPherson by the same owner over the past several years. Below is a shot of some of the homes that are now completed on the north side of the block in their construction phase. The 5700 block of McPherson was once Skinker-DeBaliviere’s emptiest block, with nearly half of its parcels being vacant lots. This new round of building will fill in the western corner of the block and reduce some of that emptiness.