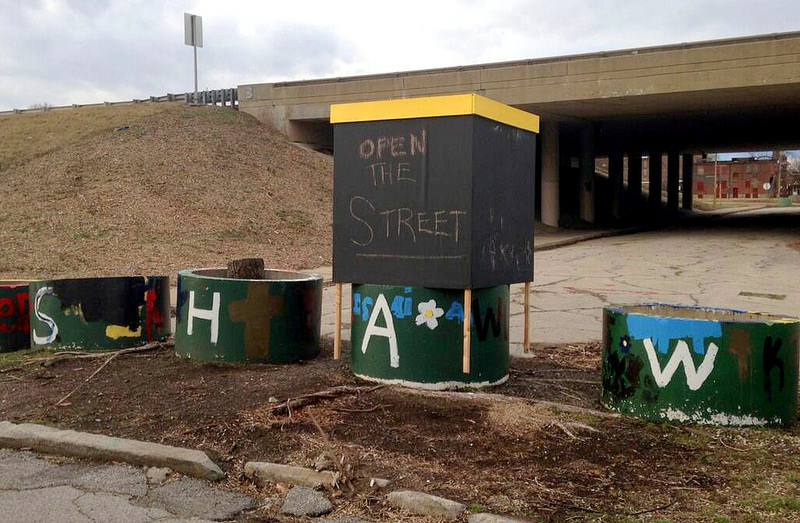 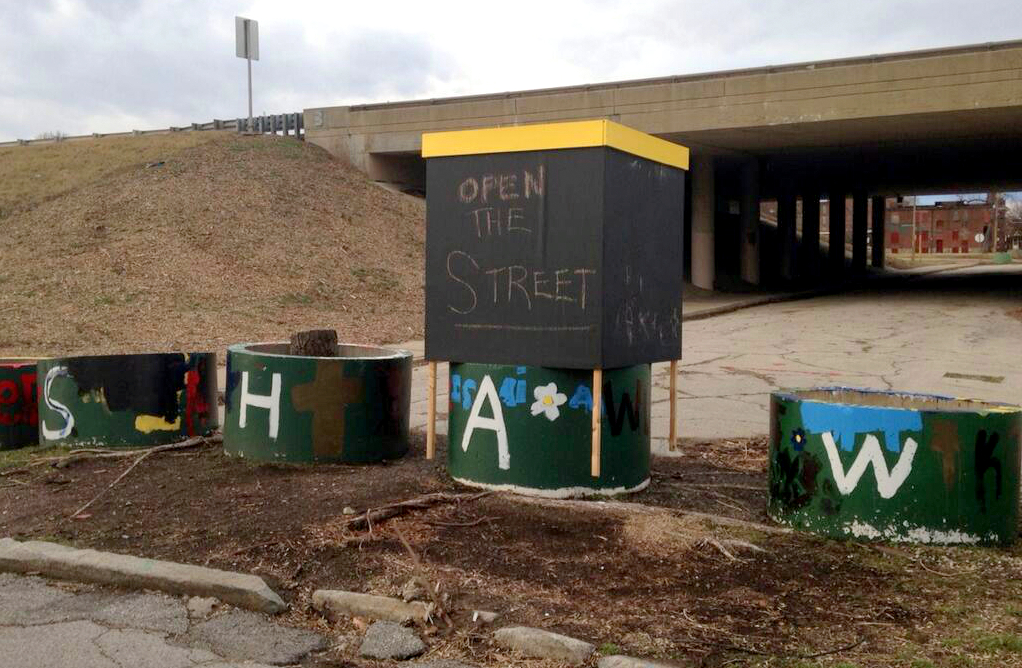 This article is an expanded version of the catalog essay that accompanies artist Lauren Pressler’s installation Latch and Plaque, currently on view at the Cecile R. Hunt Gallery at Webster University.

If St. Louis’ street system has a defining and unique characteristic, it is the street closure. The great river city never completed its circumferential parkway system, with only parts of Kingshighway hinting at the promise realized in Kansas City’s boulevard system. With the Gateway Arch project, the city erased its oldest and most picturesque streets. Our streets are significantly tree-lined, a true gift, but disrupted so often that a stranger might well avoid entire neighborhoods altogether. The city body seems at war with itself at each blockade.

The city street system reflects a pattern of willful disruption and alteration that essentially seeks to smother the urban circulation patterns with a suburban-style overlay. More than crime prevention, speed reduction, child safety or the semblance of exclusivity, St. Louis’ grid was severed to replicate the hierarchy of traffic ways and belonging found in the suburbs. The result is not just a hierarchy of streets — it is a hierarchy of spatial privacies, rooted in restricting pedestrian access and public gathering as much as the noise of cars.

Privacy seems coterminous with tribal identity when barrier placements reinforce class and racial divisions. Walking through the Central West End, one hits elegant iron gates or even mundane concrete barriers north toward Olive Street, which despite a gentrifying nature is still divided from the genteel streets to the south. The barriers also seem to protect the neighborhood from the largely black neighborhoods north, like Fountain Park, which suffers its own circulatory convulsions around barricades and one-way streets. The physical demarcation of racial divides like this only echo Cee-Lo Green’s pondering lyric in Goodie Mob’s “Cell Therapy”: “Every now and then, I wonder if this gate was put up to keep crime out or keep our ass in.”

Such a dichotomy in purpose also embodies the twentieth century planning theory that sought abolition of the historic city grid. One of the most influential tracts advocating the replacement of the urban street grid with a new street plan was Ludwig Karl Hilberseimer’s City Plan (1927), a foundation for modernist approaches to cities. Hilberseimer proposed that cities be structured around large expressways for efficient delivery of private automobiles, and residential streets and even business districts be set upon ancillary streets that did not necessarily have to be through streets. Hilberseimer and his contemporary Le Corbusier expressed deep hostility not just for street grids but for the ways in which older patterns of settlement bound urban experience. The modernists sought to replace the unpredictable world of streets, many of which were narrow irregularly-placed in their native European cities, with a mechanical engineering of sorts. Key was segregation of pedestrians and vehicles, needed to support modern high-rises that repeated the divisions of uses and people vertically.

In St. Louis, the modernists had great influence on City Engineer Harland Bartholomew, whose revulsion at St. Louis “antiquated” street system appear in his 1926 transportation plan. At Bartholomew’s urging, the city first sliced proto-expressways through neighborhoods. While Bartholomew first aimed to simply impose new types of arteries for rapid vehicle transportation over the existing city, eventually he came to the conclusion that the entire grid needed removal and replacement in older districts whose buildings he also wanted to remove. The Bartholomew-authored 1947 Comprehensive City Plan repeated Hilberseimer’s ideas that truly modern, sanitary and safe neighborhoods needed to supplant their older street systems with arterial systems in which secondary streets were simple spokes that did not necessarily carry through traffic. The Plan‘s plates showing proposed modernized Soulard, DeSoto-Carr and other neighborhoods made it clear that Bartholomew wished to impose the same mode of order found in the new suburbs around the city in the heart of the city. If the plans seemed acceptable, it was due to the influence of modernism — and the side effect that new spatial order would have for a city starting to demographically upheave itself amid the Great Migration.

Still, St. Louis left its people free passage across the city body until 1961, when the Board of Aldermen passed its first street vacation ordinance, which eliminated 23rd Street at Washington Avenue in the wholesale district. Federal funds for urban renewal clearance propelled studies for more street vacations, and by the mid-1950s when neighborhoods like Mill Creek Valley and DeSoto-Carr fell to subsidized evisceration, their grids disappeared along with their shops, residents and buildings.

However, blockades to impede those traveling across the city did not appear until 1977. By then, a major theoretical underpin came from Washington University professor of architecture Oscar Newman, whose hagiographic research into St. Louis’ private streets and its doomed Pruitt-Igoe public housing project led him to conclude that old cities required “defensible space” — streets that did not pass through, to allow monitoring of who used them. Newman’s work was publicized in his book Creating Defensible Space (1973), which was endorsed in practice by the Department of Housing and Urban Development. Newman popularized the street-grid hostility once found in the dense works of European theorists.

Across America, in storied urban settings from New Orleans to Buffalo, few traces of Newman’s theory can be found. The ideas resonated only as far west as Skinker Boulevard and could not cross the Mississippi River, it seemed. Newman’s locality seemed to encourage street blockages in St. Louis. Newman himself credited the city’s private streets, with their gates and closed ends, as the genesis of his theory:

The residents owned and controlled their own streets, and although anyone was free to drive or walk them (they had no guard booths), one knew that one was intruding into a private world and that one’s actions were under constant observation. Why, I asked, could not this model be used to stabilize the adjacent working and middle-class neighborhoods that were undergoing massive decline and abandonment?

The city’s official Saint Louis Development Program, an interim comprehensive planning document approved by the City Plan Commission in 1973, supported Newman’s recommendations under the rubric of traffic control, stating baldly that “There are many streets whose primary purpose is not to carry through traffic.” Traffic, of course, is the passage of people as much as it is of any particular form of vehicles.

While many of the resulting closures seemed to engender division, property abandonment and even demolition, the first blockage in city history is rather gently tucked into a stable historic neighborhood at Grand and Crittenden. Since this blockage in 1977, some 261 others have followed, with a staggering 104 blockages signed into law by Mayor Vincent C. Schoemehl in his terms between 1981 and 1993.

Neighborhoods like Skinker-DeBaliviere, Shaw, Forest Park Southeast and others are now confusing places to outsiders, with a plethora of gates, culvert pipe ends nicknamed “Schoemehl pots” for the mayor, one-way streets and other devices that manifest Oscar Newman’s theories. The origins behind each device are not as straightforward as lore would have it. In Shaw, the closure on Flora Place records strong sentiment to protect the stately street of large homes from traffic, but it does not record significant dissent among residents when the closures occurred in the 1980s.

Planning theory may influence street-block proponents to this day, but there is no consensus on their benefits or utility. Their persistence remains remarkable, however, because rarely do they disappear – and other cities facing the same traffic and crime issues as St. Louis have never implemented them with as much vigor.

In 2009, local television news showed St. Louisans a mother of a shooting victim who was distraught that four barricades impeded the arrival of emergency responders. St. Louis Fire Chief Dennis Jenkerson became a rare city official who criticized the closures. “This has been an ongoing concern of the fire department’s. We don’t like them. They severely impede what we do,” Jenkerson said at the time. Since Jenkerson’s remarks, the Board of Aldermen has passed and Mayor Francis Slay has signed many bills closing streets and alleys across the city.

Philadelphia consultant Ira Goldstein authored a Market Value Analysis study for the St. Louis Community Development Agency last year. As Goldstein traversed the city, he was struck by the lack of connections between neighborhoods, often caused by physical obstructions in streets. In January 2014, he told St. Louis Post-Dispatch reporter Tim Logan: “I’ve never seen that anywhere. You have these big flower pots at the end of the street. You might want to rethink that.”

Yet many St. Louisans take the occluded street system for granted by now. Locals expect iron gates and “Street Not Through” signs to stop their attempts to explore and connect. The insulation of neighborhoods spatially perpetuates the interior/exterior dynamic reflected in our fragmented government and racial segregation. The pattern is suburban, in intent and effect — although strangely St. Louis County has proportionately fewer blocks, making its pathways more open to all.

Wayfinders inside and outside of the local culture, however, find the street closures present a mysterious form of behavior modification. In The Image of the City, planner Kevin Lynch reminds readers that elements like street blocks don’t present an isolated impact on people’s minds. Lynch writes: “Nothing is experienced by itself, but always in relation to its surroundings, the sequences of events leading up to it, the memory of past experiences.” St. Louis’ street system now inflicts upon public perception doubt about the openness and accessibility of the city itself. The blockages insulate entire areas and isolate the parts that make the city whole and connected. The city is at war with itself at each blockade.

Streets Not Through_Analysis of the Blockages and Barricades to the St. Louis Street Network by nextSTL.com