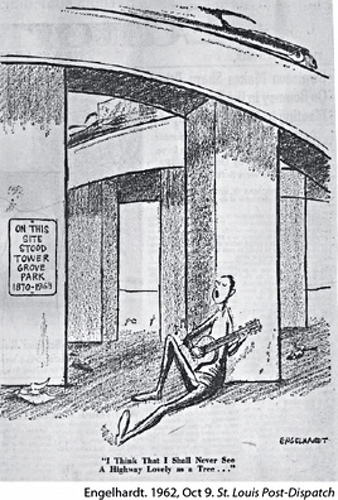 “I think that I shall never see a highway as lovely as a tree…” This is the caption of an editorial cartoon that caught my attention as I looked through clippings in a binder marked A Bit of Shaw History from 1958-1971.

With funds budgeted in a bond issue approved in a city-wide election in 1955, the City of St. Louis pursued building a depressed highway linking Tower Grove Avenue and Morganford Road. The mayor at the time, Raymond R. Tucker, said the proposed road was an important link in the city’s master street plan developed by the City Plan Commission and would make it more accessible for visitors.1,2

The goal was to relieve traffic, and allow for commercial vehicles to travel through the park. At the time the city’s population was 750,0264 and apparently north-south travel allowed on Grand and Kingshighway was not enough. Based on a report by Shaw resident, Philip C. McGrath, at a meeting hosted by the neighborhood, it took only five minutes to drive around the park.5

The proposed highway would have extended road at Morganford and Arsenal, curve northeast around the tennis courts and playground, and rise to surface level at the intersection of Tower Grove and Magnolia avenues. The new highway would be fenced off and at least one vehicular and pedestrian bridge would be built. As an alternative solution, the Landmarks Association proposed that the city build a partial or complete tunnel.2

Many cautioned against the decision to expand the road through the park and open it to commercial traffic.

In addition to protests from Shaw, Oak Hill, Compton Heights and other neighborhood associations and residents, provisions set forth in Henry Shaw’s will posed a challenge for the city. When Henry Shaw donated the land to the city in 1868, he stipulated that it was only to be used for a park. If the land ever ceased being used as a public park, it would revert to the Missouri Botanical Garden.1,5, 7-10

Beginning in 1960, the City of St. Louis sought a favorable court judgment that would rule the highway appropriate and within the provisions under which Henry Shaw had deeded the park grounds. Defendants in the suit included the board of trustees of the Garden and the commissioners of Tower Grove Park. This was not the first time the merits of similar proposals were discussed. According to an article in the Globe Democrat, the consideration of a north-south drive that would be open to commercial vehicles had been before the park’s commissioners for more than 45 years (i.e., since at least 1914).1

Though it was speculated that the $325,000 in bond issue funds would be inadequate for the project, the city pursued a court decision in their favor for five years. On September 13,1965, the Missouri Supreme Court held that the City of St. Louis had no power or right to construct a highway through Tower Grove Park. Though the central road was eventually expanded, the city never fulfilled its proposal for a “highway.”11

*this post first appeared on the excellent Historic Shaw St. Louis site – check it out for more on one of the city’s great neighborhoods