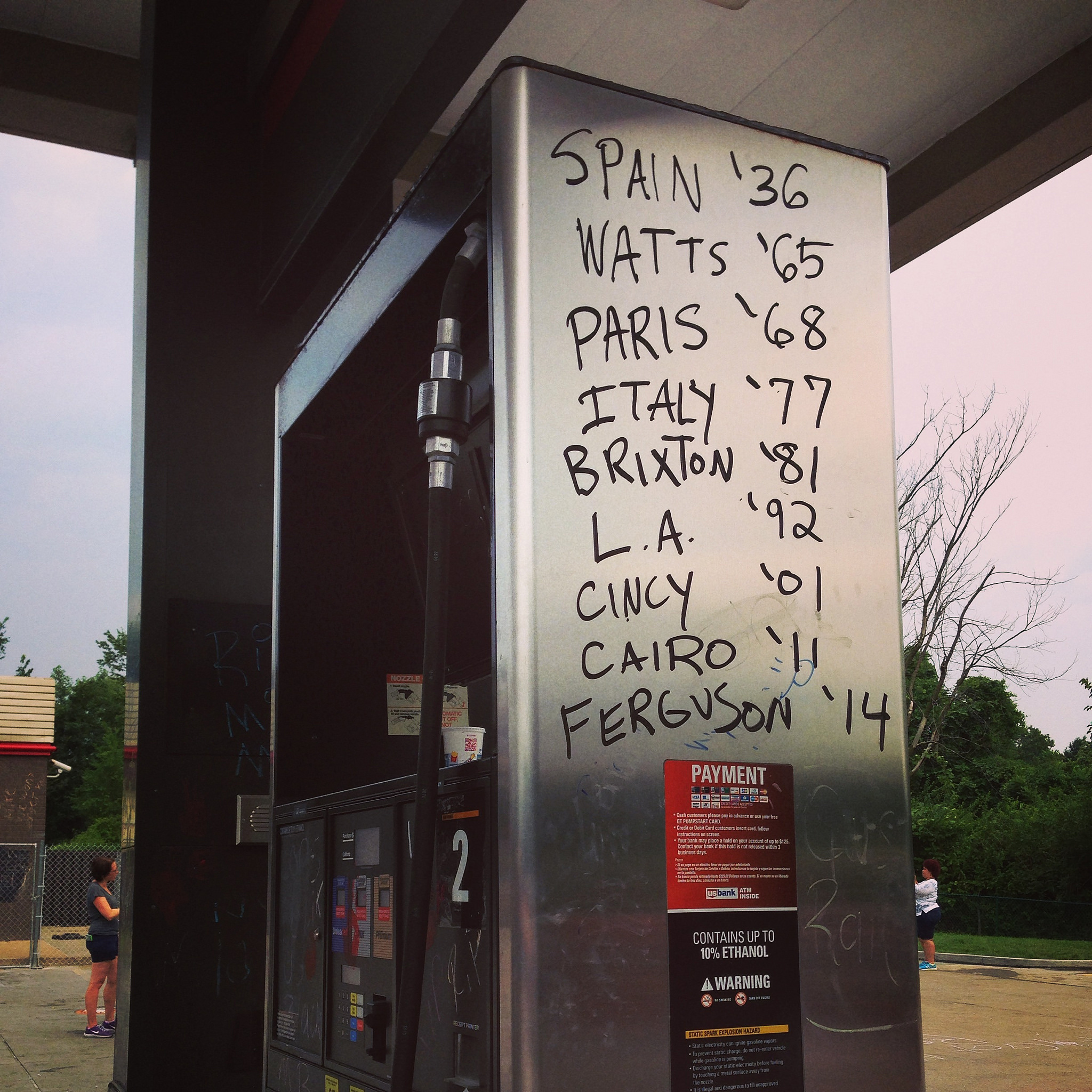 For nine days after Michael Brown’s death, the Ferguson QuikTrip on West Florissant Avenue served as an unlikely public square — what one graffiti tag declared the “QT People’s Park” (“Liberated 8-10-14”). “It’s all we have,” an early protest organizer declared. Yet its brief political life has ended, and it may now disappear from public memory altogether. 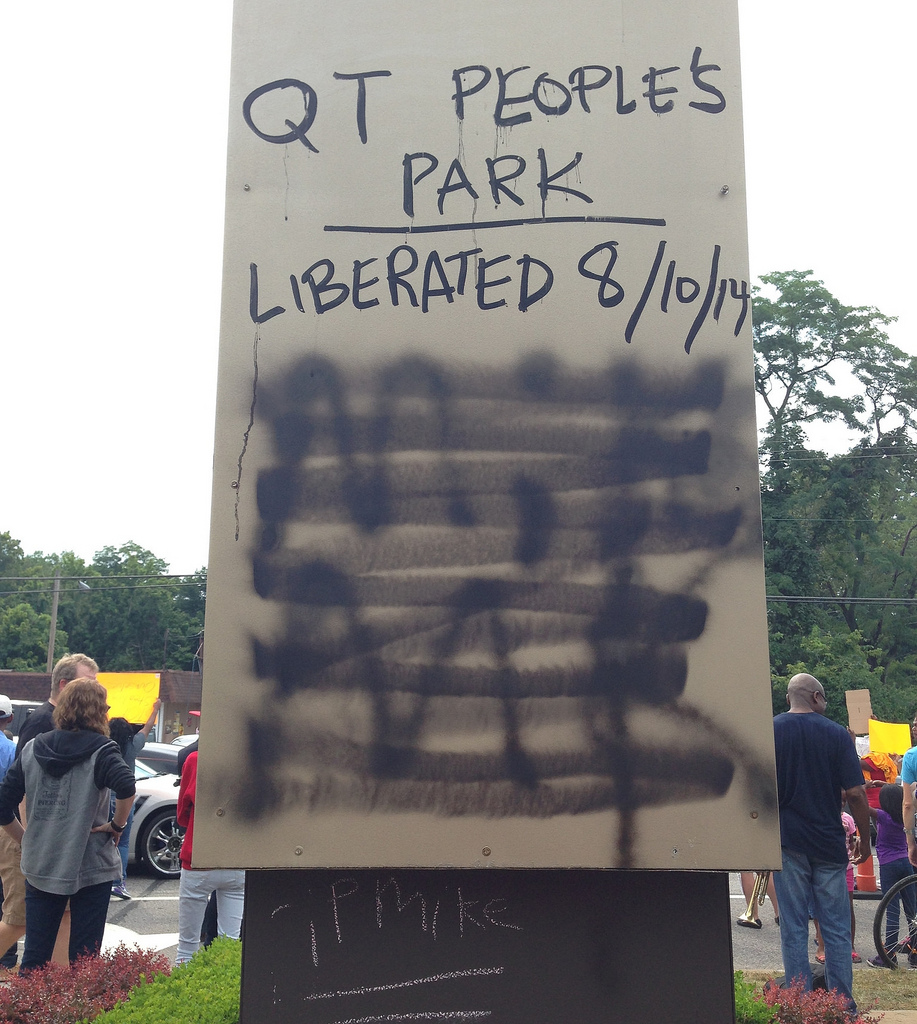 The iconic Ferguson QT may be the most photographed structure in St. Louis aside from the Gateway Arch. Thousands of images have been circulated worldwide: photos of looters tripping over upturned shelving and merchandise, or eying the camera defiantly on their way out; photos of the flaming roof and the half-burned shell; photos of a sagging roof line and graffiti-marked walls; photos showing the building’s guts splayed out onto the pavement; photos of residents staring in disbelief. These are expressions of a world upended, of suffering made plain.

Other QT photos express a sense of the flowering of new democratic life. Even as parts of the building caved in, the site served as a stage of public grief, commemoration and political resistance. People gathered in the parking lot or near gas pumps, some holding signs and chanting. Others paid tribute through prayers, silence, the simple act of being present in community. And many inscribed their views directly onto the QT structure: “RIP Mike,” “Snitches get stitches,” “County police” (crossed-out), and a list of historic episodes of civil unrest starting with Spain ‘36, including Watts ‘65, L.A. ’92, Cairo ‘11, and Ferguson ‘14. 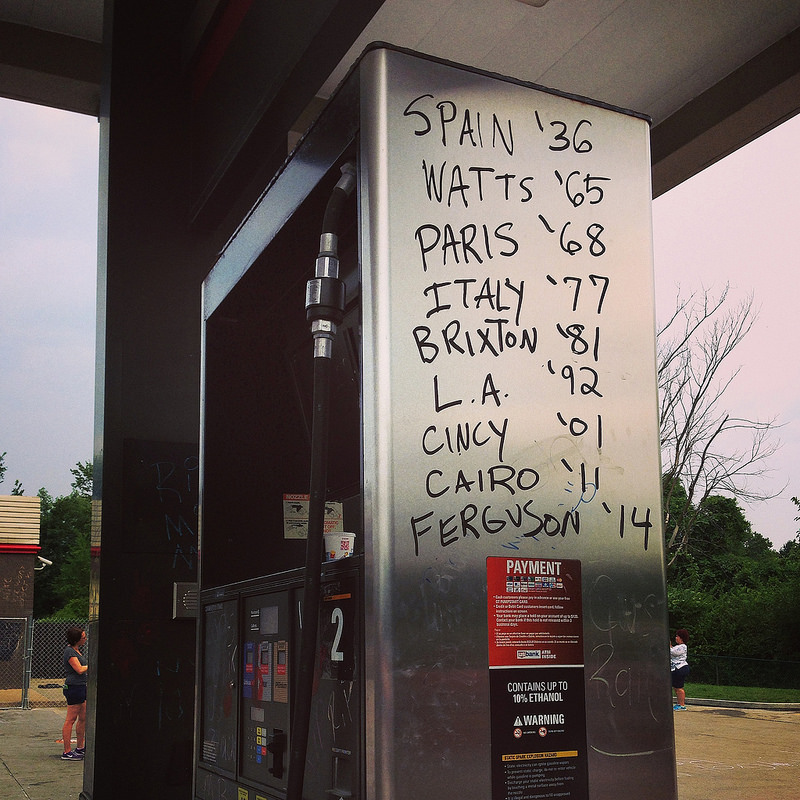 QuikTrip officials understandably saw liability instead of liberation in all of this, and set upon managing the physical site as well as its messages. On August 19, workers erected a chain-link fence around the property, dismantled remaining signage, drained gas pumps, and shuttered a second QT store nearby. These were predictable measures: there was concern for “public safety,” and police could not contain the site by means of force night after night.

In fact even before it was enclosed, members of the public sought to manage the site. Some shooed protestors away from the unsafe building and underground gas tanks. Others painted over graffiti and cleared debris. The day after the firebombing, a local resident taped a handwritten note to the side of the burned-out building which implored her “Corporate neighbor” to rebuild the QT: “I am sorry this act of robbery & violence happened. Please return soon. I stop in 2-3 times per week. A 15-yr. customer of QT.” Many took photos of themselves in front of the wreckage, including “selfies for peace.” 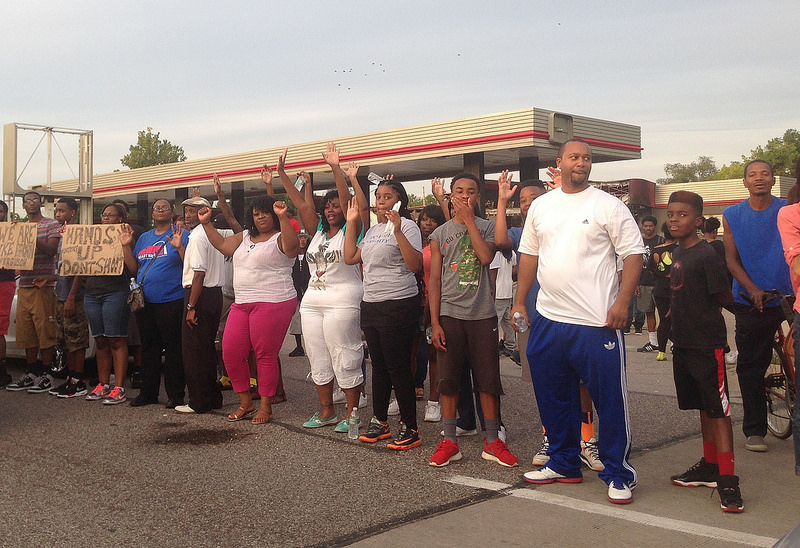 {people gathering at the QuikTrip on august 13, the first day of Missouri Highway Patrol command – photograph by Michael R. Allen}

When the QT was accessible, protesters knew where to go when they arrived, where to start marches and where to post information. Ferguson Police Chief Thomas Jackson legitimized this function when he chose to release Officer Darren Wilson’s name at the site, beneath the canopy sheltering the dormant gas pumps. As the week wore on, new protests and acts of resistance originated there. Outsiders made pilgrimages to the site. Its significance was clear.

Now groups have scattered. Recent demonstrations were channeled into marches that pass by the QT as though it were nothing special. At the National March on August 30, the QT was nearly invisible to thousands who marched to Canfield Village, where gathering continues.  The fencing of the site, and the near-constant police presence in front, has curbed protest activity. Even small-scale tributes have ended. Like the mechanisms of crowd-control already used in Ferguson (barricades, tear gas, rubber bullets, smoke bombs, curfew, helicopter surveillance), site containment has effectively altered not just how people act but what they think and say about the QT. As media coverage in Ferguson dissipates, the lingering public perception of the QT will be all that many remember about the event in years to come. The site itself will be just another abandoned gas station. 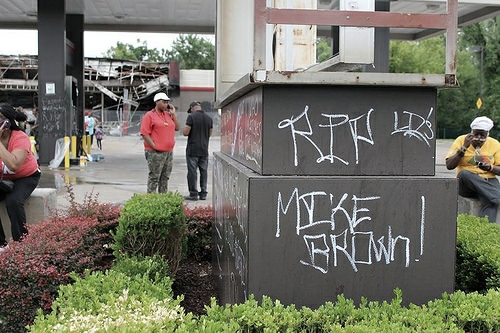 {the QT as memorial – photograph by Susannah Lohr}

Like many spaces that take on a sudden and unexpected political life, the QT has meant different things to different people. It has given expression to multiple, contradictory messages, many of which were written-over with each passing moment. And the chaos that took place there was a single episode superseded by days of peaceful and purposeful community-building.

Some sites attain cultural landmark status through the official designation. Others acquire it instantly, through mass action. These sites are precious. While it seems an unlikely landmark, the QT has achieved cultural significance. Its varied and complex meanings should be preserved even if it the building is not. We lose too many sites of struggle and social change before their stories are recognized, let alone understood. Let us not erase the QT as quickly and quietly as the media seems to be turning away from the ongoing Ferguson demonstrations.