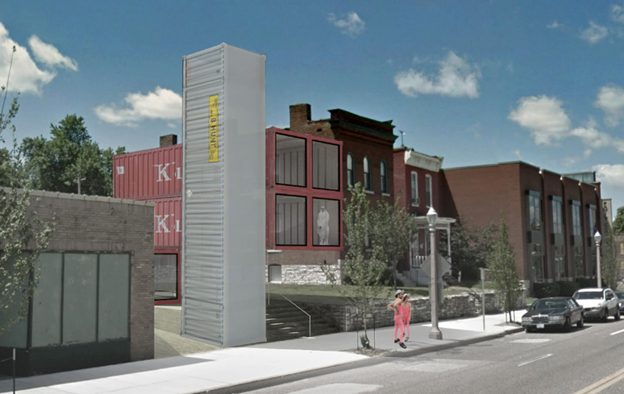 The St. Louis Redevelopment Company, LLC has applied for a building permit to construct six new townhouses at 1703 S. Tucker (at the corner of Lafayette) in the Bohemian Hill section of the City (technically within the Peabody Darst Webbe neighborhood). The permit is labeled as “zoning only”, which means the city’s Zoning Section must approve the land use for the site prior to any further work or permit issuance.

The architect on the project may be Anthony Duncan, who has been tasked with designing several outside-of-the-box projects in St. Louis.

One such project is a shipping container structure in the Grove, a project that seems to be stalled. Below is the rendering for that project found on Mr. Duncan’s website: In this early stage of the Bohemian Hill project, there are no known renderings or sketches of the proposed Bohemian Hill infill. If we discover such images, we will be sure to post them on this blog.

Nevertheless, it is significant that there is a residential proposal for this large and highly visibly vacant lot. For years the entirety of Bohemian Hill seemed to be threatened with demolition by the encroaching Gilded Age development to the west that now includes a Walgreen’s and local grocer Fields Foods. In fact, in the mid-2000s, Gilded Age even produced a rendering that showed the remaining blocks of Bohemian Hill replaced with a combination of new housing and shops.

If approved, this project could solidify the Bohemian Hill remnant’s preservation. Other early 2000s-era infill exists at 13th and Soulard, shown below:

The six townhouses would be constructed on the vacant lot visible in this photograph. The Old City Hospital, now a residential building known as the Georgian, looms in the background:

Click here to read more on Bohemian Hill, including some photographs of the buildings that were demolished to create the Gilded Age development in the now-gone western portion of the neighborhood, at the Built St. Louis website.