As Missouri considers its transportation future and how to fund it, we’re reposting the series “A World Class Transportation System” by Chuck Marohn, president of the organization Strong Towns. Its mission is “to support a model for growth that allows America’s towns to become financially strong and resilient.” They cover a broad range of topics beyond transportation, check them out. This series focuses on the transportation conversation in Minnesota, but is analogous to ours in Missouri. The two states are close in population and land area and rank fifth and sixth in total lane miles of highways, roads, and streets. We’re also working to bring Chuck to St. Louis this fall. If that’s something you’d like to help with please contact Richard Bose at [email protected]

After the 1914 Battle of the Marne, World War I settled into trench warfare. During the subsequent four years, German, French and British generals threw wave after wave of their soldiers against nearly impenetrable defensive fortifications. The almost gentlemanly art of war that had persisted throughout the prior century, where troops lined up in brightly colored uniforms and charged at each other in a struggle of strategy and finesse, gave way to the wholesale slaughter of millions with machine guns, barbed wire and chemical weapons.

Today we look back at this time with incomprehension. What is so clear to us today – that trench warfare is both disastrous and futile, particularly for those on the offensive – took millions of lives, and years of reflection, for them to fully comprehend. In both the military and the civilian leadership at the time, all but a small minority fought the last war, those tiny few that could see the changes happening overwhelmed by accumulated dogma. Not until that leadership had thrown away an entire generation did the fighting cease and the open questioning begin.

Last month, the transportation coalition Move MN released their long-awaited proposal for transportation reform. While the stunningly broad coalition of advocates had promised a proposal that would be “comprehensive, balanced, gimmick-free and dedicated,” the sales tax increases they put forward fails each of those yardsticks. Along with President Obama’s proposal for throwing some one-time money at transportation released here in Minnesota a week later, the Move MN approach represents this state’s leadership clinging to the accumulated dogma, throwing more troops at the front line in a mindless effort to move it a few hundred yards.

Times have changed. We have to stop fighting the last war. When it comes to transportation, Minnesotans need to stand up and question, not only their leadership, but themselves. We don’t need a broad coalition finding new ways to storm the same trench. We need an entirely new way of thinking.

I chose the military analogy because, when it comes to transportation systems, a recurring battle over the same ground describes our current set of values. Minnesotans today – and this is really true of nearly all Americans – view transportation investments on a continuum of improvement. We move from one stage to another – as an army takes one hill after another – and it is unfathomable to us that we would ever give up ground. No retreat, because retreat is a sign of failure.

This mentality, which is never questioned, has overtaken the entire transportation debate. When civic leaders write in support of more funding, they use terms like “upgrade” to reinforce that we are proposing to improve our current position, to take another hill. Never retreat. Everything we have today is assumed to be good. More of what is good is then surely better. Every two lane highway will someday become a four lane. Every four lane, a six lane. Every traffic signal is simply an interchange in waiting. Progress is measured as more of what we already have.

Even those who don’t necessarily believe that more of what we are presently doing is good are willing, as part of this coalition, to accept a lot more of it if they can only get more of what they want too. There is only one thing Bituminous Roadways, Inc., the Minnesota Environmental Partnership, the Associated General Contractors of Minnesota and the Bicycle Alliance of Minnesota (among many others) can all agree on: more money for transportation. You can take your hill so long as I can take mine. No retreat.

Last year, Minnesota Transportation Commissioner Charles Zelle traveled the state telling us that we need an additional $50 billion in transportation spending over the next two decades if Minnesota is to have an “economically competitive, world class system.” The proposals from the committee Zelle is getting his numbers from (and was a member of) would, despite some significant tax increases, raise only $20 billion. Even Move MN’s proposal would only raise of fraction of that, some $360 million annually or $7.2 billion over the next 20 years.

Why do we accept that our leadership has acquiesced to a system far below “economically competitive” and “world class”? Is Governor Dayton, the Democrats and Republicans in the legislature and all these coalition leaders saying we should accept – despite spending tens of billions more than we are now – a system that leaves us lacking in competitiveness, worse off than countries with much smaller economies?

Yes, actually they are, because they are all stuck in the current paradigm. They are collectively fighting the last war. More is good and less is bad. No retreat. And because – whether they personally believe it or not — they are captive to this mentality, they are not able to communicate (or maybe even grasp) the implications of changes going on in society.

Anyone who is willing to dismount their horse, take off their plumed hat, sheath their sword and survey the new battlefield can see that traffic demand is no longer increasing in the predictable way it did for decades. 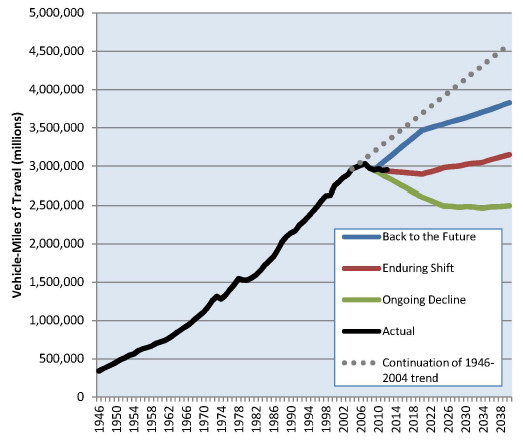 That fact in and of itself changes everything. Not only have we been overbuilding our infrastructure for years based on bad projections – thousands of lane miles and billions of dollars that were misallocated – but we continue to project our future needs using this same dogma. How much of that $50 billion in new money that we supposedly need is actually unnecessary? How much of what we’ve already built could we abandon without impacting the state’s economy? These questions can’t be answered because, in the current debate where more is good and less is bad, we can’t even ask the question. 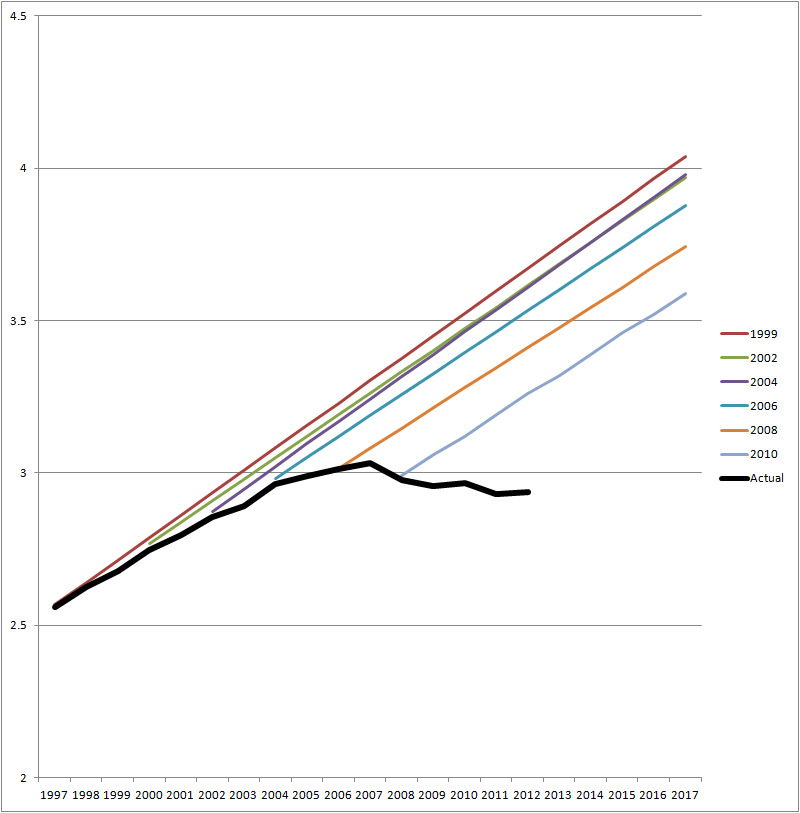 {Combined traffic projections from state and regional transportation agencies (the colored lines) have been wildly off the mark (the black line shows real traffic levels) for more than a decade. Source SSTI}

I could quote a few hundred different articles or books here showing how living patterns are changing with auto-oriented development in decline and walkable, urban neighborhoods on the rise (both in big cities and small towns). Our population is aging – will they continue to drive everywhere – and young people are not as into cars as they once were (maybe because they can’t afford them). Do these trends matter beyond simply how they justify “more”?

And finally, let’s just examine a clear case where less is actually better: the road diet. I realize that many of you – particularly my colleagues in the civil engineering profession – really struggle with the concept of the road diet because it runs counter to the current “more is better” paradigm. By removing lanes, narrowing lanes, adding bike lanes and putting on-street parking back in place, road diets have been shown to improve traffic flow and increase safety for everyone. And they do this with – wait for it – LESS money, not more.

Why, when our leadership has expressed so clearly the enormous financial gap we have in funding a “world class” transportation system, are road diets not an obsession of transportation departments everywhere? Why are cities, who benefit financially not only from the reduction in expense but also from the dramatic increase in financial productivity of the resulting land use pattern, not demanding the less-is-more approach of the road diet?

The answer is simple: we are still fighting the last war. We experienced six decades of robust growth as we simultaneously built the world’s largest and most intricate network of roadways. As Baby Boomer and fellow Minnesotan Thomas Friedman pointed out in his book, That Used to Be Us, we “know” the equation to prosperity. We built the interstate system and it made us wealthy. We just the need the will to make the hard decisions (aka: a coalition to give cover for taxing and spending just a little bit more without any substantive policy changes).

Current Obsession: Get more money to continue doing more of the same thing.

In service of this obsession, we make ridiculously poor utilization of our collective investments, we never stop to measure the financial impact we believe we are having, we adopt policies that transfer collective wealth to a few and, thanks to a broad coalition of Minnesota’s leadership class, we seem ready to tap our remaining wealth for one last, feeble hurrah.

To really move Minnesota ahead, to make us a strong and economically competitive state long into the future, we need a new obsession.

New Obsession: Build the collective wealth of all Minnesotans and, in doing, strengthen the entire state.

The United States won the Revolutionary War almost entirely by retreating. Bunker Hill, the Battle of Long Island, Valley Forge; these were all losses – retreats – in a military sense. They were ridiculed by leaders at the time but now, with history providing a dispassionate prism to view the events, are not only understood as military necessities, but sound strategy. If we want a strong and economically competitive Minnesota, we need to abandon the current “more is better” paradigm and rethink our entire approach to transportation.