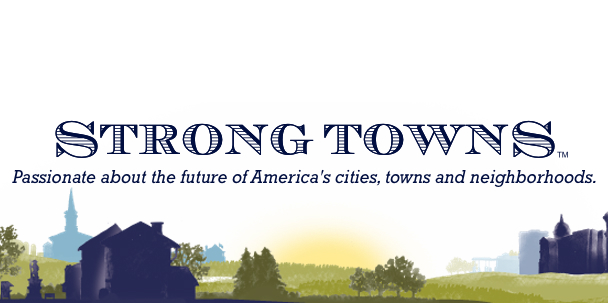 As Missouri considers its transportation future and how to fund it, we’re reposting the series “A World Class Transportation System” by Chuck Marohn, president of the organization Strong Towns. Its mission is “to support a model for growth that allows America’s towns to become financially strong and resilient.” They cover a broad range of topics beyond transportation, check them out. This series focuses on the transportation conversation in Minnesota, but is analogous to ours in Missouri. The two states are close in population and land area and rank fifth and sixth in total lane miles of highways, roads, and streets. Thanks to generous support from WUSTL ISSUES Magazine, Better Together, Citizens for Modern Transit, and the Urban Land Institute St. Louis, we’re bringing Chuck to St. Louis October 7-9! We’re working on programming and hope to do appearances around the region. Contact Richard Bose at [email protected] to discuss possible appearances.

The advocacy coalition Move MN is proposing a tax on wholesale gasoline as a stealth way to put a little bit more money into extending Minnesota’s current approach to funding transportation. That approach is not viable over the long term and so the Move MN proposal simply puts off – and worsens – the adjustment we need to make from an expansion model to a maintenance/value-capture model. We’ve overbuilt our transportation infrastructure and now we need a new set of policies and approaches to get a better return on those investments.

In parts 3 and 4 of this series, I outlined the principles behind a new approach and then, with a significant amount of detail, gave specific policy recommendations consistent with those principles. I promised to finish the series by reviewing who the winners and losers would be.

Mn/DOT (WINNER): While Mn/DOT would have to change its mode of operation, it would be a welcome change for most of their staff. No longer would they be cajoled to build stuff they know makes little sense while they tried to patch together parts of the system they know to be critical. Instead, it would be very clear when an improvement was needed and where the money was to come from. Mn/DOT would need to become skilled at deploying a value capture technique – something they have no clue about today – and those on their staff that obsessively believe that building more is always good will be somewhat disillusioned. Even so, Mn/DOT would have more money from funds redirected from the State Aid system – which I proposed to scrap – which would make things somewhat easier in the short term.

County Highway Departments (LOSERS): I called county highway departments “dinosaurs waiting for a meteor” and my proposal would stop promoting their efforts. They would scream and moan at the unfairness of having to build their miles of unproductive stroads without the benefit of federal and state gas tax dollars. Austerity is not a policy, it’s a consequence, and if we are going to do triage, it only makes sense to do addition by subtraction by ending funding to the leading driver of transportation waste, inefficiency and lack of productivity. As I do with cities, my proposal would give counties the tools to make their own decisions and raise their own revenues, but it is a task they will find impossible to do. There simply isn’t enough value created in the county system, and thus enough wealth that can be extracted from its use, to keep it going.

Municipal Governments (MIXED): In my proposal, cities gain all the tools they need to grow and maintain a strong town, but they lose the federal/state support (along with the mandates). For many local officials, this would be a terrifying new world, one in which the buck truly does stop at city hall and they can’t just sit around and wait for the federal and state governments to bail them out (or blame them when it doesn’t). For other local officials, this would be a tremendous opportunity to build and fund a viable, productive city. While there would obviously be a transition and widely variable outcomes, over time the best practices of a strong town would reestablish (by necessity) and that knowledge would spread across society and the professions.

Chamber of Commerce (WINNER): It isn’t clear to me why the Chamber is advocating so strongly for the MoveMN slush fund approach as it really wouldn’t directly benefit all but a handful of their members (those positioned to get a quick gain from one of the proposed system expansion projects). I suspect their support (or the way they are explaining their support to their broad membership) is an effort to stem the decline of the system. If that is the case, they should love my proposal, which is the only serious approach out there to truly address long term maintenance. I suspect they would complain about not having transportation-oriented commerce subsidized to the extent they would like, but I think they could get over that.

Unions (WINNERS): It is also not clear to me why the American Federation of State, County and Municipal Employees would be expending so much time and resources trying to get the MoveMN proposal passed. The money is “supposedly” going to capital improvements, not to salaries and pensions, but we all know how this game works. Nonetheless, if you are a public employee today, you have a huge vested interest in seeing that the government does not go broke. The MoveMN proposal keeps the current system in place, the one that guarantees our future insolvency, but buys us a little more time until we have to face up. My proposal actually provides a stable financial environment where public employees can keep their jobs and their pensions.

Highway Contractors (WINNERS): There is no way for highway contractors to come out losers in this discussion, unless we absolutely go bankrupt and do nothing. Under any scenario – including mine – they are paid to build stuff. I’ll acknowledge that, in my world, there will be less stuff to build. Still, these guys are going to make good money long into the future by maintaining the miles and miles of stuff we have already built.

Developers (WINNERS AND LOSERS): The United States has an approach to land development that is amazingly simple and straightforward once one understands it. Those formulaic developers that fall in line around every transportation expansion, whether it is a new interchange or a greenfield park and ride, will be losers with my proposals. Bewildered losers – who moved my cheese? There is an entire class of developer that is struggling to emerge, however, and they will be winners. This would be the entrepreneur (in the tradition sense), the one who buys the house in foreclosure across the street to fix up as a duplex or opens an office in their garage to kick start a business. All the capital currently flows away from these players, but they are the ones that will stitch back the fine-grained economies needed to make our places strong again.

Truckers (LOSERS): The massive subsidy for over-the-road hauling will be wound down (sorry Amazon, WalMart and McDonalds) and this will cut into the profits of shipping companies. Actually, it will not cut into profit margins (the amount made per trip) but it will reduce overall demand. Higher prices for delivered goods will mean more stuff will be transported for longer parts of each journey by rail/boat AND there will be an increased market for locally produced goods. Again, for Minnesota, addition by subtraction.

Transit Advocates (WINNERS): Oh, they won’t believe themselves winners at first. The transit advocates – “Chuck, I just want a train” – have been brought to the MoveMN coalition by the promise of immediate action. In joining in this effort, they are giving up their greatest leverage: the fact that transit IS the only real high return transportation investment we have. Under my proposal, transit advocates would need to go about the hard work of actually building a place, but once they figured that out – a task they could accomplish with the wind now at their backs – it would not just be the scraps they would be fighting over anymore.

Bike Advocates (WINNERS): I misspoke in the section about transit. Biking and walking infrastructure, even more than transit, is the immediate high return investment. The immediacy is due to the low cost, ease of construction and the high impact. When cities have the tools and the incentives to focus on their long term health, investments in biking and walking will be ubiquitous. We’re not talking about going from 1% of the transportation budget to 2% (what today would be considered a monumental victory). We’re talking 25-50%. If you want biking and walking infrastructure, focus on return-on-investment.