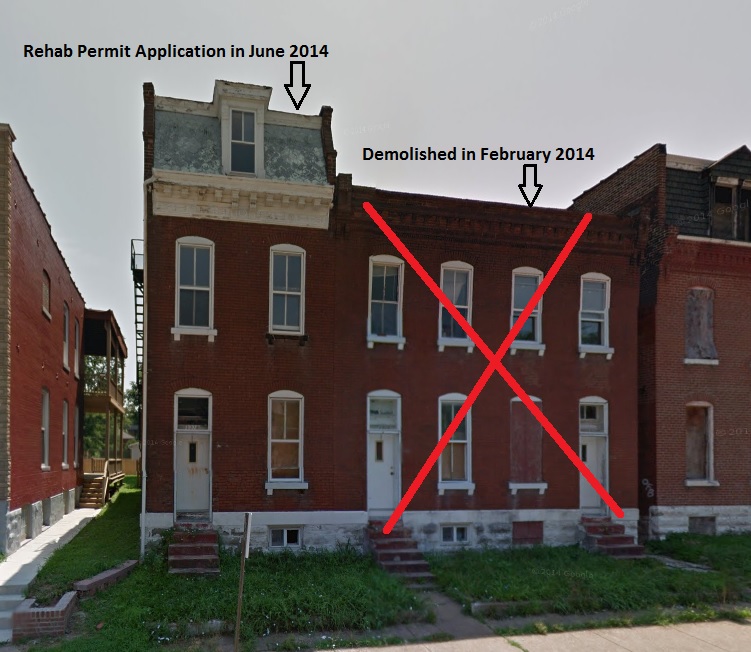 A home at 3318 Wisconsin vacant for at least the past decade may soon see a $100,000 rehab by Tiger Lily Development’s Patty Maher. Maher recently completed a stunning transformation of a onetime vacant and damaged Tower Grove East corner building that many thought would be demolished. The building permit application for 3318 Wisconsin was filed with the City yesterday. It has not yet been issued.

The 3300 block of Wisconsin is Benton Park’s most vacant and troubled block, speaking in terms of physical infrastructure. Many of the block’s homes remain vacant, though sporadic rehabs have occurred over the past few years. Sadly, a portion of 3318 Wisconsin became unstable and was demolished in February 2014. The remaining portion of the parcel addressed as 3318 Wisconsin–a stately 3-story Second Empire-styled building–is set for rehab.

Below is a Google Streetview capture displaying the portion of the parcel that was demolished and the portion that will be rehabbed: For an unadulterated Geo St. Louis shot (and one from a different angle), see below: While it is a shame to lose historic housing stock in a strengthening neighborhood like Benton Park, it is something of a consolation prize to see the demolished building’s attached neighbor get some rehabber attention.