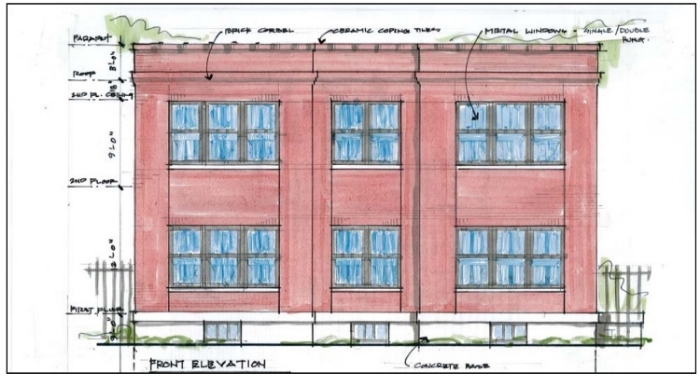 In October of 2013, two different owners proposed to construct two somewhat unusual single family homes on two separate but nearby vacant lots in the Benton Park neighborhood. Both properties were required to seek approval  from the city’s Preservation Board, as both homes fall within the Benton Park Local Historic District. Both homes were given the green light at the Preservation Board’s October 2013 monthly meeting.

The first, located at 2834 McNair, is a rather institutional-looking red brick two-story building that would subsume what was once two vacant lots. The land has since been re-subdivided into one parcel. Yesterday, a building permit application in the amount of $300,000 was received by the City to construct the large single family home. That building permit has not yet been issued.

Below is a rendering provided to the city’s Cultural Resources Office (CRO) staff for review back in October 2013. Please note that the designs shown below may not be the product that will soon be built. Often developers and architects discuss the details of the new construction with CRO staff and make edits to their designs in order to ensure compliance with Local Historic District code. The second home is designed to be ADA-accessible throughout, which explains its low-slung, one-story horizontal design. It is located at 2841 Indiana. A drawing of the design is shown below. The home will stretch across four city parcels, which are likely to be consolidated at a later date.

Again, the design shown below may have changed since October 2013.

The $350,000 building permit for this single family structure has already been issued (as of February 2014) and site work is now underway.