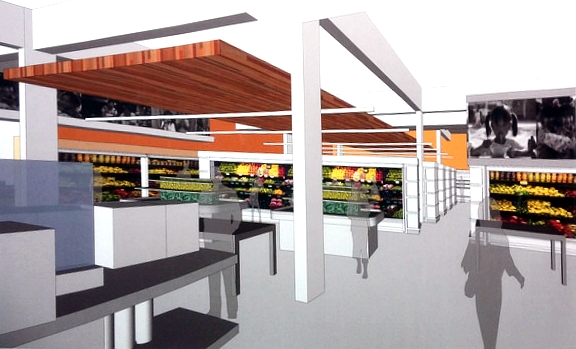 Additional details have been released for the new grocery store in the Loop. The store will be named United Provisions and is slated for a late July, early August opening in the Washington University in St. Louis student housing development under construction at Eastgate Avenue and Delmar Boulevard. Brought to you by the same family behind Jay’s International Food Company on South Grand, and Global Foods Market in Kirkwood, the 15,000 sq ft store will feature ~12,000 sq ft of full selection of groceries along with international foods. They plan to pack as much as possible to the point of describing it as cramped, to offer the widest variety of products. Yes, you will be able to buy toilet paper and toothpaste. The remaining space will include prepared food, a coffee bar, and seating for 67 along with a a few outside dining tables. After 5 pm there will be table service.

Beer, wine, and spirits will be carried, with beer and wine by the drink available for dine-in patrons. The liquor license application process has not yet begun. Hours of operation will be 7 am to 10 pm daily. On-street short-term metered parking will be available in front of the store along Delmar, as well as in shared parking lots at 616 Eastgate and around the corner at 633 Skinker. The liquor license permitting the sale of packaged alcohol could be contested, as there is currently not a place to purchase carry out alcohol. Growlers of beer can be purchased at Cicero’s at the far west end of The Loop, which is in University City. United Provisions is located in the City of St. Louis. Package liquor sales have been opposed and rejected for Loop business in the past, though the grocery store is hoping for a different outcome.