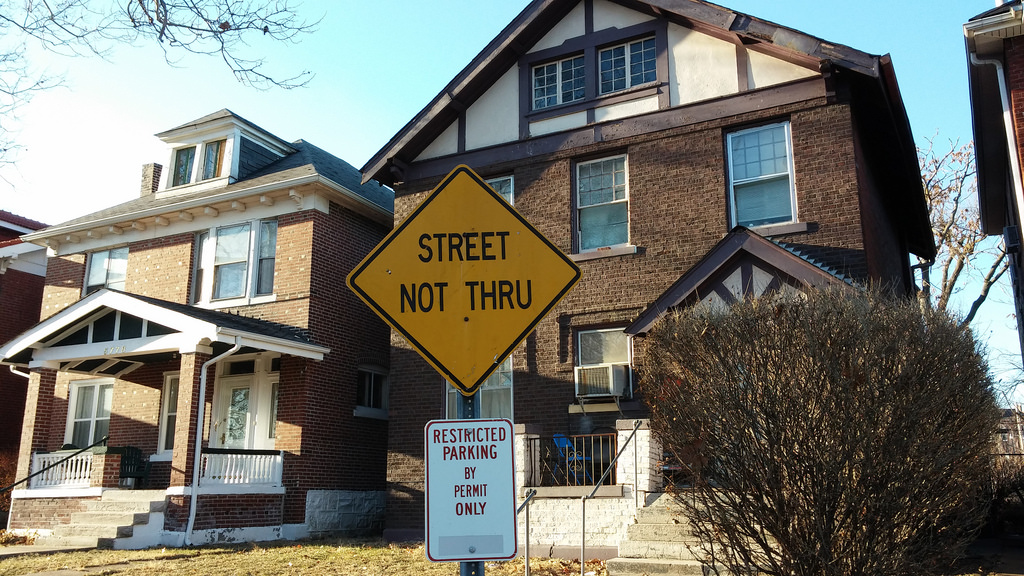 St. Louis needs a more formalized process for opening and closing streets. Closed streets should be reviewed periodically or at least by request, and closing them in the first place should take more than asking the alderman and passing a bill via aldermanic courtesy. Perhaps they should reopen by default after a certain amount of time unless reauthorized. The streets belong to the whole city; we all pay for them. They don’t belong just to the block they front. There are much better ways to calm traffic. The blockages make traffic worse overall; they don’t just move it elsewhere. #healthegrid

One closed street, the Thurman underpass, where Thurman Avenue passes under Interstate 44, has spawned a design competition. Despite some creative talent and time put into the project, it remains closed. Hopefully its days are numbered as the closure now divides two relatively prosperous neighborhoods, and the old prejudices may fail to keep barricades in place. As with many street closures in the city, this one can be easily undone. At least one person has had enough: We see this sign too often in St. Louis. Too Many of our streets have been cut off and the street grid interrupted.
Some for highways
Some for parking
Some for stroads
Some for failed housing projects
Some for new developments
Some for pedestrian areas
Some for universities
Some for parks
Some for stadiums
Some for a national monument
The most frustrating are the ones that block otherwise passable streets.
Some are pretty
Some are bollards
Some are Jersey barriers
Some are Schoemehl pots. Named after the mayor in the 80s.
Most of them are in neighborhoods. They came to be out of fear and desperation. Fear of thru traffic. Fear of scarce parking. Fear of crime. Fear of outsiders, fear of the next block over. The street grid best absorbs and distributes traffic. It best supports multimodal transportation. It creates the best platform for wealth creation. It provides the most eyes on the street. It permits the most flexibility in adjacent land use. It evolved over the centuries all over the world for these reasons. The hierarchical street structure developed in order to make car-oriented places. The cul-de-sacking of St. Louis hasn’t solved our problems. It’s given us the worst of both worlds- streets that don’t go thru and stroads that can’t handle peak traffic volumes all at a high cost. Removing most of them just takes courage and choosing to have an open city. Let’s heal the grid. #healthegrid

For more on the value of the street grid see this video from StrongTowns.org

Streets Not Through_Analysis of the Blockages and Barricades to the St. Louis Street Network by nextSTL.com