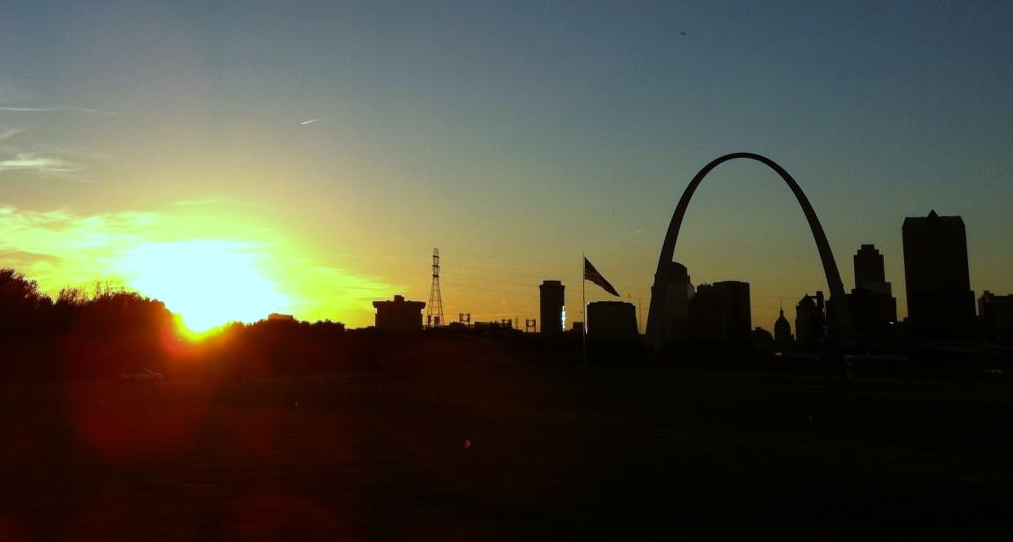 You want to know why the inaugural Transition Economics event is being held in St. Louis, Missouri – home of beer, riverboats, and quite a few Major League Baseball championships?

After all, who wants to come to the Midwest? Aren’t there much cooler places, such as San Francisco, Manhattan, Los Angeles, New York, the Bay Area, Brooklyn, Silicon Valley, and Boston? Don’t people escape the Midwest for a reason?

The answer may surprise you. Allow me to tell the story from my perspective.

I am a strange ambassador for St. Louis for several reasons. First, I am tenth-generation Vermonter, a native of the snowy lands of the northeast. Nobody in my family has ever inhabited the Midwest. I chose to build my career in Washington DC and Paris. I only chose to move out to St. Louis because my wife is from Kirkwood, Missouri. She was the one having the babies, and after watching the first delivery I figured if she wanted to live next to her mother for the next ones, that was fine by me.

Besides, it was beginning to cost a ridiculous amount of money to live in Washington, just for a front row seat to watch Tim Geithner make the world safe for casino bankers, or to watch pseudo-strategists blithely talk about bombing Iran. St. Louis real estate was absurdly cheap and it had an airport. I figured that surely new adventures awaited. In June of 2010, we packed up the car and headed west.

Let me underline this part: After a brief honeymoon, I hated St. Louis. Hated.

The summer I arrived was one of the hottest in history. I had little in common with the folks who referred to “The East Coast” as a geographic monolith from Massachusetts to Georgia. People ask you where you went to high school as a way to identify your socioeconomic position. For many, subjects other than baseball were seen as seriously exotic. Racially, the Civil War seemed not to have been concluded. The downtown area had been long-since abandoned to sad urban decay. Moreover, there was a sense among many that change was irrelevant, because Things Have Always Been This Way.

Did I mention that I’m from just south of Montreal, and summers here were 108? I hated Saint Louis.

But once you start having kids and buying houses, it takes a lot of time to fix mistakes, and even if I wanted to get the hell out (which I did) I was going to have plenty of time to hang around while the details got sorted. 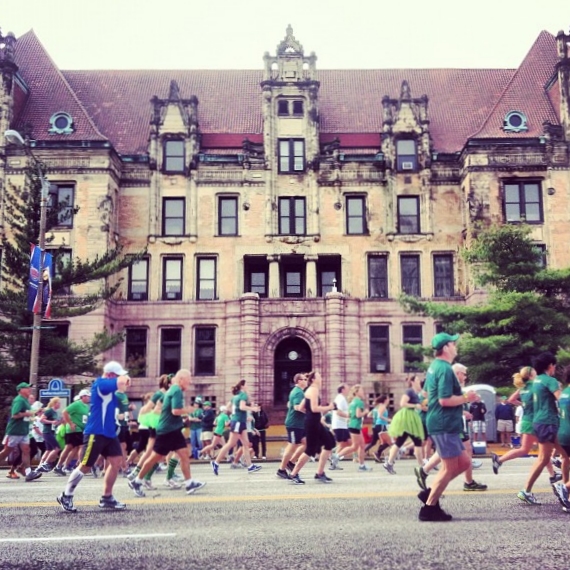 Life in the boneyard of majesty

Stewing in my discomfort and dreaming of Paris, I had ample time to drive around Saint Louis plotting my escape. In that period of time, my eyes would have a chance to drift upward, especially when downtown. While looking at the ground, the city’s modernity is often ugly, but as you look toward the heavens, you see the infrastructure of a city made of brick and marble, one majestic structure after another. For a people who lived comfortably among sterile highways and suburbs, the downtown seemed to have been originally built in the grandest European traditions.

If you ever see the streets dug up for any reason, you will probably see a layer of street car tracks just below the surface. Saint Louis used to feature an enormous network of trolleys, more even than San Francisco or New Orleans. It’s just that one day, the automobile won and that was it.

A thought began to creep into my head – this place should be awesome. Better yet, this place could beawesome. Saint Louisans often make references to a time when the city was America’s fourth largest, The Paris of the Midwest. They had World’s Fair here, you know. But all of this was always in the past tense – used to be.

I began to wonder – why couldn’t this place possess that grandeur again? Everywhere you go, you see the bones of a Golden Age, beautiful-if-abandoned buildings, a schematic for a world-class public transit system, human-scaled walkable neighborhoods. Why couldn’t that be the future as well as the past?

I came to believe that this is possible, here and in many other communities.

With more time, I came to another realization: St Louis is the perfect vantage point from which you can see the economic future – in America and beyond.

The city is already an amalgam of the whole nation. It’s part North and South, split in half during the Civil War. It is both East and West, the last stop before the frontier and yet already in the plains. It has the industry of the Rust Belt with the agrarian bent of the Midwest. Cold in winter and hot in summer, southern barbecue and Italian food from out East – the list goes on. This city is the crossroads of America in almost every sense. 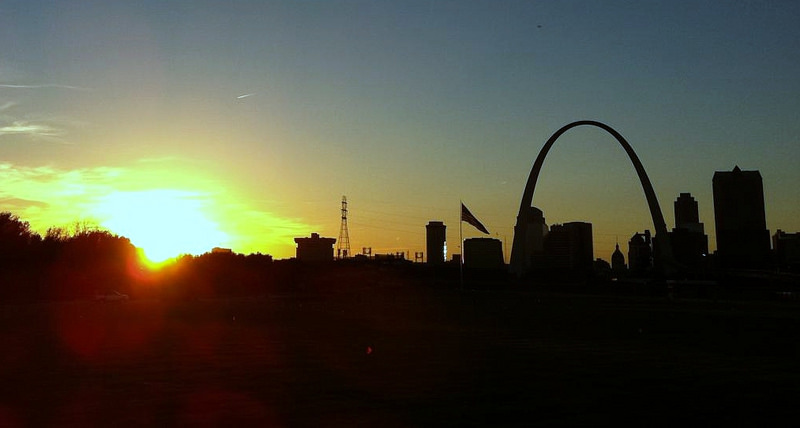 Moreover, St Louis represents just about everything that is promising and totally dysfunctional about America, all in one place.

The cost of living is low, but that’s partially due to lack of demand. There’s ample real estate, both business and residential, and lots of suburban sprawl. St Louis is the site of many innovations and new ideas – though the scars of past failures remain, as in highways destroying neighborhoods and a waterfront mostly abandoned. The Gateway Arch is a beloved symbol, but it is the result of pork barrel spending and the destruction of a historic neighborhood. Race and class issues still simmer. Young people seek their fortunes elsewhere. Downtown has been neglected and badly needs investment and redesign. People remember the 20th century as a time of greater prosperity and simplicity (whether it was true or not.)

In other words, it’s exactly like the rest of America: Detroit, Cleveland, Poughkeepsie, New York, Wilkes-Barre, Pennsylvania, Waterloo, Iowa, my hometown of Rutland, Vermont. Most of the communities that are not the beneficiaries of financial bubbles or foreign wars have hard work ahead. Central planners are not going to save them. The latest tech innovation is not going to save them. The job of revitalizing the economy, culture, and civic life of our communities is in the hands of individuals and the new groups they form. It is up to people in the communities themselves to drive toward the future – from the grassroots on up.

Saint Louis is not a unique city in terms of its assets and liabilities – but because it embodies so much of the rest of the America, it is the perfect place to meet up as we develop a new vision for all of the various places we cherish.

The good, bad, and ugly of the economic future

As I noted in Harvard Business Review, they are usually bustling yet predictable affairs, full of experts on stages, vendor expositions, and glad-handing. For many, these are just hollow rituals, ones that fail to improve the management of our affairs, despite the considerable investment of capital. I submit that this is because there is an unwritten rule at these events – we are all there to show off how much we know for certain, so we can sell things. Whether you’re a government employee working on economic development or a consultant with a shingle out, you’re both selling something. And when you are in sales mode, you are motivated to put everything in its best light and avoid the difficult and essential questions before us. Our real challenges are tough to paint with a glossy veneer.

I submit that doing something positive about the economy, in America and beyond, depends on our ability to look at the good, the bad, and the ugly simultaneously – without running back to the status quo in fear. So I’m inviting you to Saint Louis, home of all of America’s assets and liabilities. There’s nothing to be afraid of – it’s just our past, present, and future, all here at once.

That, plus baseball. And incredible craft beers. And great food. And manufacturing. And grand old buildings. And three rivers. And a surge of entrepreneurial activity that will surprise and inspire you.

So what are you doing May 19 – 21, 2014? You should come out and see it for yourself. Visit Transition Economics to learn more.

For more than fifteen years I have been researching strategic trends in society, technology and economics. I help leaders figure out what it all means. It's a fun gig.