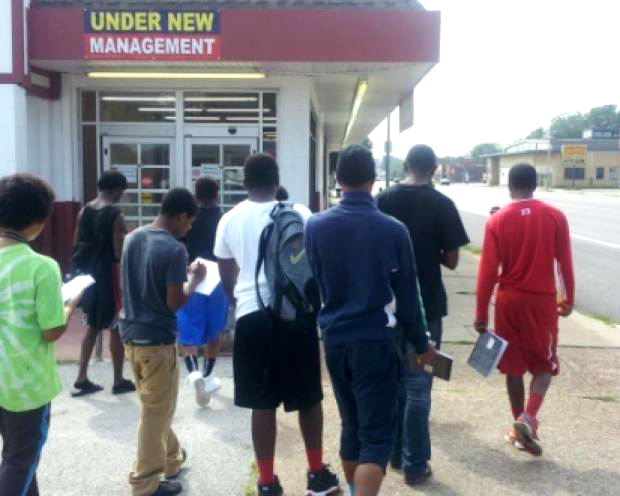 A walk through a low-income neighborhood aimed at showing at-risk youth the possibilities for economic change goes disturbingly awry.

At first, the lesson didn’t go exactly as I had hoped. We piled 20 or so of our students in vans and cars and sent them to two distinctly different parts of St. Louis. Half of the teens went to the tony, upper-class Central West End neighborhood while the other half were sent to a low-income stretch along Natural Bridge Avenue in North St. Louis. They’d switch locations later.

This assignment is part of the Sweet Potato Project, a program that aims to teach “at-risk,” inner-city youth entrepreneurial skills they can use now, in their own neighborhoods. At the beginning of the summer, our kids plant sweet potatoes. For nine weeks we teach them about teamwork, marketing, branding, website design, social media and other techniques and skills they can use to make legitimate money off the products they make from their produce.

With this particular exercise, called “Hood Walks,” students are instructed to take their journals, walk up and down the streets and jot down the landscape, the types of stores, advertisements, billboards and the services offered.

It falls under our “Community” curricula. The idea is to get the youth to adopt a sense of community ownership. We strive to get them to take a hard look at the dynamics of neighborhood economics. I want them to see supply and demand, advertising and economic activity in middle class neighborhoods and start thinking of ways to bring the best ideas to low-income communities.

The latter outcome was missing from our discussion after the exercise. The teens talked about how clean the higher-income area was. They were impressed with the hotels, coffee and ice cream shops and the bevy of eateries and outdoor cafes they saw. They also noticed the inviting and welcoming array of signs, billboards and advertisements in the area.

Their reactions were drastically different when they talked about the mostly poor, mostly black section of North St. Louis. The teens complained of too many liquor, payday lending and rent-to-own stores. They noticed billboards that advertised lottery tickets, alcohol and services for drug addictions, teen pregnancy and other social disorders. They were harshly critical of residents and business owners who they didn’t think gave a damn about the cleanliness of the area. Some felt there was no way in hell to ever clean up North St. Louis.

Even though I didn’t get the immediate deep analysis I was seeking, I gleaned much from simply asking questions like: “Why do you think there are so many lottery, payday lending and liquor stores in your area?” That question led them to talk about poverty, dashed dreams and the need for quick relief and gratification. When I asked why the stores were different in the two areas, they discussed unemployment, demographics and what kind of institutions supported and attracted the businesses and clientele in the “nice” part of town.

I then asked them about their comfort level in the two areas. That’s when the conversation took a somber turn. My kids weren’t oblivious to the police cruiser that stopped in the middle of the street to watch them or other police officers business owners and customers who felt the need to heavily scrutinize this group of black kids walking the neighborhood with notebooks in hand. They told me of the outdoor cafe diners who out-and-out ignored their greetings.

“At least in North St. Louis, they seemed happy to see us and returned our greetings when we said ‘hello,’” said Chay, 19, one of our students.

Their comfort level was the nugget I used to bring them back in line with the assignment. That’s when we were able to discuss the opportunities within the chaos of impoverished North St. Louis. There are plenty of businesses here but they know of very few owned by people of their hue. When I asked what they can do about that they talked about the desperate need for hotels, nicer restaurants and business that offered better service and respect for customers.

Still, that sense of “hopelessness” remained. The challenges were too big. Most still couldn’t see how they could turn things around.

The following week, I arranged to take them to a relatively new shop, Chronicle Coffee, right in the heart of North St. Louis. It’s a beautiful black-owned business with a calm, aromatic ambiance and historically refreshing atmosphere. Black and white photos aligning the wall show a history of North St. Louis; a chess board in the space signals an invitation for intelligent, relaxed conversation and interaction. Manager, Albert Jacobs, spent a good half hour or so discussing the shop’s genesis and the owner’s commitment to improving North St. Louis. Jason Wilson, the owner, operates two other coffee shops, one in the Central West End. After the presentation, some of the youth eagerly filled out job applications.

I asked the teens to look outside the shop’s huge smoke-tinted windows and tell me what they saw. They noted the Walgreen’s drug store, the PNC Bank and other new housing developments nearby. I specifically asked that they look at the few remaining vacant lots near the shop. Then, the dots began to connect.

“Yeah, Mr. Brown, we can grow sweet potatoes there,” one student answered. Another, Charles, 16, pointed to Chronicle’s display case of baked goods. “You think you’d let us sell our sweet potato cookies here,” he asked Jacobs.

Attitudes changed; imaginations were sparked; the impossible seemed somewhat possible- all thanks to one visit to a professionally-run, culturally-relevant, black-owned establishment.

I had the young people write “thank you” letters to the coffee shop’s management. Their letters convinced me that our exercise wasn’t in vain:

“I thank Chronicle Coffee for trying to make that side of town a positive place with less violence,” wrote Zavier Meaneers, 15, “hopefully, (it) can inspire other parts of the north side to create a positive place to come in and communicate with new people.”

“Dear Chronicle Coffee,” wrote Elesha, 18, “I would like to thank you for inviting us to your coffee shop…the location…in a community of less fortunate African Americans…is amazing! This business can show African Americans something positive in the community…thank you for welcoming us and giving us good service.”

My appreciation goes out to the owners of the shop, too. “Thank you,” for showing our youth that the impossible is indeed possible.