America has done a great job connecting its places via the Interstate highway network. Unfortunately the passenger rail network has been left to decay. Stimulus money has helped enhance some existing routes such as 110 mph service STL-CHI and some new service such as Chicago to the Quad cities. But when one looks at the Amtrak route map one sees in the Midwest it’s an “all trains go to Chicago” hub scheme rather than a network connecting major cities with each other as the highways do. The Amtrak route map should look like the red lined map below.

Increasingly airlines aren’t interested in short routes especially if both destinations are not a hub. Driving cannot be productive time. Passenger rail can fill the gap for both business and leisure travelers. We’re better off with more travel choices and stronger connections between cities. Riders are showing up. Amtrak keeps setting records. Capacity is becoming an issue; new rolling stock is on order. Several routes were operationally profitable last quarter.

Unlike Missouri’s recent highway expansions, the small improvements to the St. Louis to Kansas City line have resulted in much higher on-time percentage (64% in 2008 to ~90% today), which have helped boost ridership from a bottom of 110k in 2007 to 200k in 2013. A siding was added near California, MO at a cost of $8.1M ($4.8M from MO, $3.3M from the FRA). A proper station in St. Louis no doubt has helped too. A second bridge at Osage River ($28M) opened last year and completes the double-tracking from St. Louis to Jefferson City, relieving another bottle-neck. Small incremental improvements are paying off.

Frank DeGraaf proposed a true HSR link between St. Louis and Kansas City with an estimated cost of $8.7 billion. While that would be great (along with an HSR route to Chicago), I suggest a more incremental approach. Let’s see what we could achieve with much less money.

First go to four a day St. Louis to Kansas City. Union Pacific would insist on double-tracking the route west of Jefferson City. MoDOT estimates this plus train sets would cost $400M. I’m skeptical that that’s really necessary, but let’s go with that. Currently Missouri spends $8M to operate the route, so double that for $16M. Before you scream subsidy just think we’re talking about $2B to rebuild and many more millions to maintain I-70 with a general sales tax. The subsidy may end up being less as Illinois saw a more than one-to-one increase in ridership after adding two new dailies to the STL-CHI service. The upgrades west of Jeff City would save some time with some of the route being class 5, 90 mph capable. The two new trains could be limited, that is skipping stations, to save more time (STL, KWD, JEF, LEE, IDP, KCY). 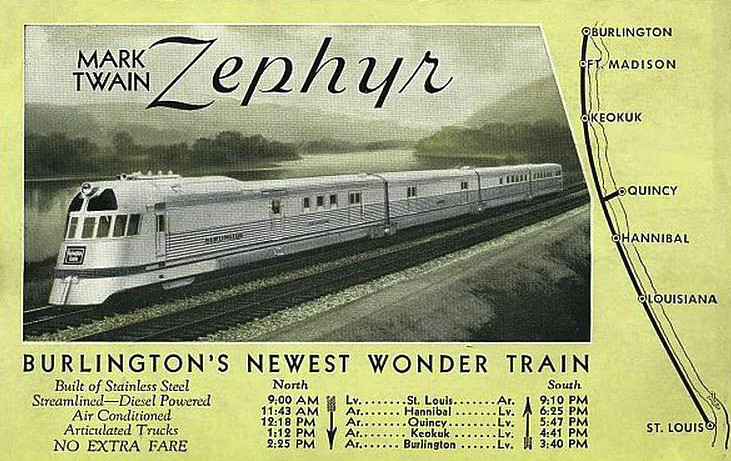 Extend the Carl Sandburg and Illinois Zephyr (rename it the Mark Twain Zephyr) from Quincy to St. Louis via St. Charles. The Hannibal Convention & Visitors Bureau has been lobbying for service to extend from Quincy across the river. I say run it all the way to St. Louis. This allows for riders to connect with the California Zephyr and Southwest Chief in Galesburg, as well as riders originating in between, a route to St. Louis. At first it could run through West Alton, but with about 5 miles of new track it could serve St. Charles and Lambert Airport. This also sets up nicely for commuter rail from St. Charles County, which I prefer over extending Metrolink.

So that’s 117 miles of track to upgrade to class 4, 79 mph at about $2M per mile plus 5 miles of new right-of-way at $10M per mile it comes out to $284M for track and crossing upgrades, and stations. No new rolling stock needed. I’m excluding any big bridge replacements, the trains already cross the Mississippi to turn around. Operating subsidies I figure would be about $2M a year as Illinois already pays for Chicago to Quincy. With Quincy and Hannibal connected to Lambert Airport, we can end the Essential Air Service subsidy and use the $2M per year in lieu of MO’s contribution.

Two a day to Indianapolis (Call them the Brickyard Zephyr and the Gateway City Express) with a suburban station in Collinsville. CSX is taking good care of the route to Indy so I’m estimating $1M per mile for track and crossing upgrades, and stations; 236 miles or $236M. Stops in Collinsville, Highland, Vandalia, Effingham (connects with City of New Orleans, Saluki, and Illinois Service), Terre Haute, Green Castle, Indianapolis Int’l Airport, and Downtown Indy. This would also make it possible to reroute the Cardinal providing a one-seat route to Washington DC. Two train sets, $30M. Operating subsidy $8M. I propose $1M from MO, $3M from Il, $1M from Indiana State University, $1M from DePaw University, and $2M from Indiana.

Two a day to Memphis (call them the Memphis Belle and Spirit of St. Louis) with a suburban station in Belleville. This would run on the Canadian National line from St. Louis to Du Quoin with a stop in Marisa. The tracks look rough so I’ll estimate $2M per mile for class 4 rails for 70 miles, $140M. After Du Quoin it would run on the same tracks as the City of New Orleans. The CoNO averages 44 mph from Carbondale to Memphis, so I’m guessing the tracks could use some upgrading at $1M per mile, or $220M. Two new trains sets, $30M. Operating subsidy $8M, split $1M MO, $4M IL, $1M SIUC, $2M TN.

The big enchilada will be a new rail bridge over the Mississippi. This is needed without my proposed additional traffic. With my additions and Illinois’ desire to increase STL-CHI service to nine a day, there would be an additional 18 passenger trains a day (a total of 28) crossing the Mississippi. If we are ever to hope for a lot more and reliable service to the east, the new bridge must have dedicated passenger tracks, lest we end up with the bottlenecks that plague Chicago. I suspect the bridge will cost more than $1B. I would expect the freight railroads to pay a significant portion of it.

We’d get all this new service for $1.34B (new bridge not included) and $26M in operating subsidies, far less than DeGraaf’s HSR plan and about the same as the 110 mph upgrade for STL-CHI. Four major metro areas (eight million people) and points in between would be better connected; all the more people that can come to St. Louis!

Rail maps so you can play the game at home!