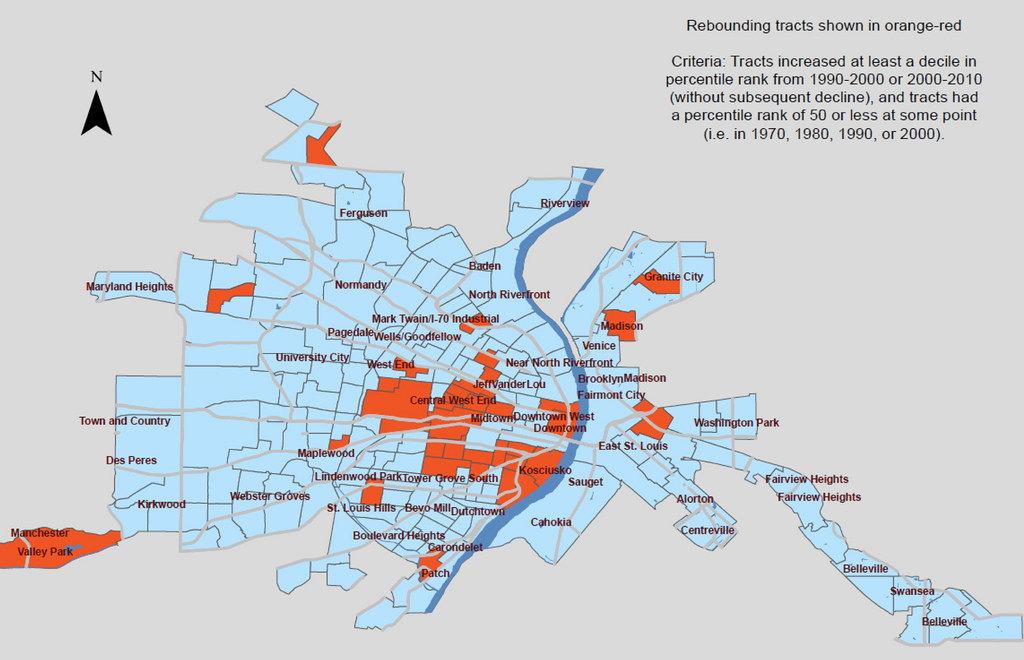 Most research on revitalizing neighborhoods views them as instances of “gentrification,” the movement of young, often single, professionals into low-income, heavily minority, neighborhoods near urban employment centers. The dominant view in the literature is that low-income and minority residents are pushed out by gentrification as the local culture and consumption patterns are taken over by upwardly mobile professionals.

Most of the research on gentrification has been conducted in strong market metros, like Boston, San Francisco, and Seattle. Hank Webber (Washington University) and I recently conducted research on upwardly trending neighborhoods in the St. Louis metropolitan area. What we found does not fit the gentrification model. 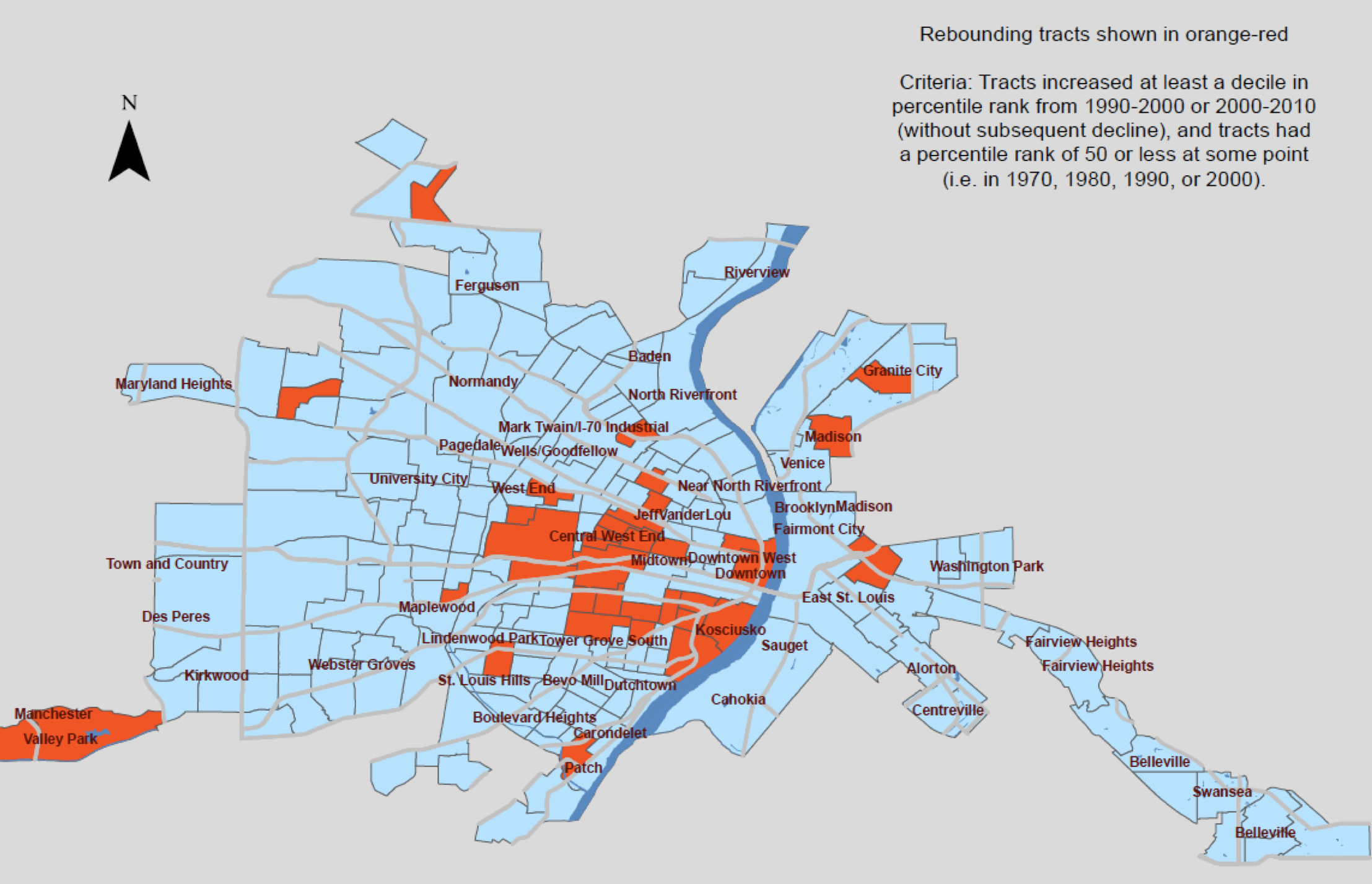 We began by identifying all of the older parts of the region that were built up by 1950 – what the Census Bureau calls the “urbanized area” (basically all census tracts with a population density of at least 1,000 people per square mile in 1950). We then developed a Neighborhood Vitality Index with three components: 1)Economic (per capita income); 2) Social (poverty rate); and 3) Physical (vacancy rate). We classified any tract as a “rebound” tract if it increased at least a decile (10 percentage points) in its ranking on the index for 1990-2000 or 2000-2010 (throwing out any census tracts that were not in the bottom 50 percent at any time in the period 1970-2010). Below is a map of the urbanized area as of 1950 in St. Louis; areas in red are “rebound” census tracts.

We found that rebound neighborhoods in St. Louis come in many different types and no neighborhood fits the classic gentrification model well. For example, some rebound neighborhoods are in inner–ring suburbs. The suburb of Maplewood, for example, has modest brick-frame housing stock but it has revitalized by creating a funky pedestrian friendly retail street with a local brew pub as an anchor. 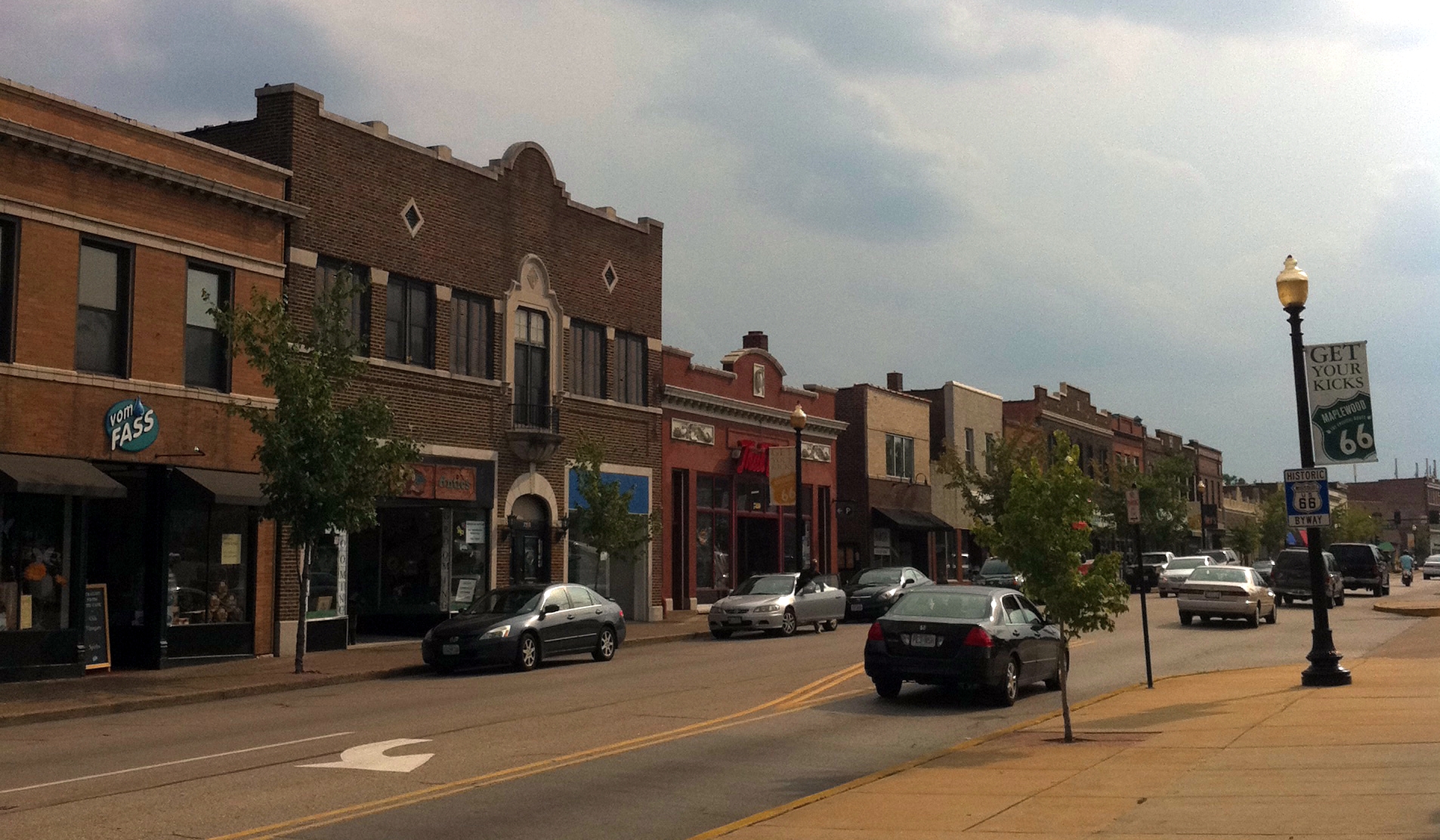 Another rebound neighborhood is Botanical Heights which has the world-famous Missouri Botanical Gardens as its anchor. One of the keys to revitalization here was the creation by activist parents of a public charter Montessori School. St. Louis City Schools have a generally poor reputation but families are moving into Botanical Heights just to get their children into the Montessori school.

There are even a few rebound neighborhoods in the overwhelmingly African American North Side which has suffered from extensive housing vacancy and abandonment. In the Mark Twain neighborhood the anchor is historic cemetery which has created a foundation to fund housing rehabilitation.

Perhaps most surprising to us was the Central West End (CWE) which is widely considered the most successful rebound neighborhood in St. Louis. CWE does fit some aspects of the gentrification model. It is located near a major center of professional employment, Barnes Jewish Hospital and Washington University Medical School and the percentage of young people ages 18-34 increased dramatically from 26 percent to 44 percent between 1970 and 2010. But what is striking is that the area is still remarkably diverse both racially and economically – with large numbers of African Americans, Asians and poor people still living in the area.

In legacy cities housing markets tend to be “loose” and that may mean that displacement pressures are less severe in so-called gentrifying neighborhoods and that economic and racial diversity may be an asset for neighborhoods rather than a problem.

More good news — young people are more open to diversity. The Center for American Progress and PolicyLink joined with the Rockefeller Foundation and Latino Decisions to assess how Americans view issues of rising diversity based on survey of 3,000 individuals. Their 160-point composite openness index measures the degree to which people are open to racial and ethnic diversity. The youngest age group—Americans ages 18 to 29—reported a mean score of 92, compared to the oldest age group—Americans ages 65 or older—which scored an average of 80 on the index.

Our research does not mean that we no longer have to worry about racial and economic segregation. Racial segregation is still high in St. Louis and concentrated poverty has spread. But it does mean, we think, that there are many more possibilities for rebound neighborhoods than the rigid concept of gentrification suggests – especially for legacy cities.

*this post first appeared at Legacy Cities, a site dedicated to “Rethinking, Revitalizing and Rewriting the Future of American Legacy Cities”

The Des Lee Professor of Community Collaboration and Public Policy Administration at the University of Missouri-St. Louis, Todd Swanstrom is co-author of the prize-winning book, Place Matters: Metropolitics for the Twenty-First Century, which examines the relationship between urban decline and suburban sprawl. His current research focuses on metropolitan approaches to equity and neighborhood change. He is devoting the resources of his endowed professorship to the Community Builders Network of Metro St. Louis, a coalition of about thirty community-based nonprofits working to build great neighborhoods for everybody.