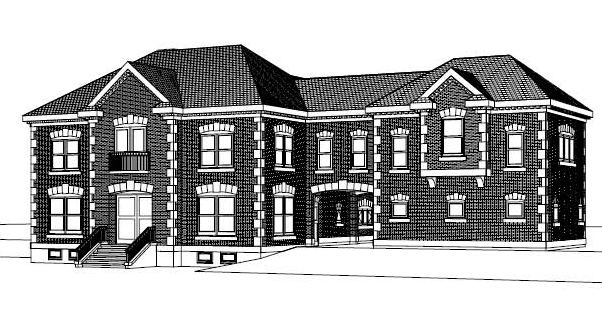 After spending the past several decades building some of Asia’s most successful banks, St. Louisan David Conner is returning home to build the first new house in more than a decade on the city street literally made for mansions. The two story home will be constructed across from Forest Park at 5805 Lindell Boulevard.

According to city records, the 3.65 acre lot at 5801 Lindell sold last April to Conner, most recently residing in Singapore, for a cost of $1.415 million. That’s about $400,000 per acre, and one of the most expensive single family lots in the region. David Conner grew up in St. Louis and is a 1974 graduate of Washington University in St. Louis, just a few blocks west, where he currently serves as a trustee. Conner recently retired as CEO of Overseas China Bank. 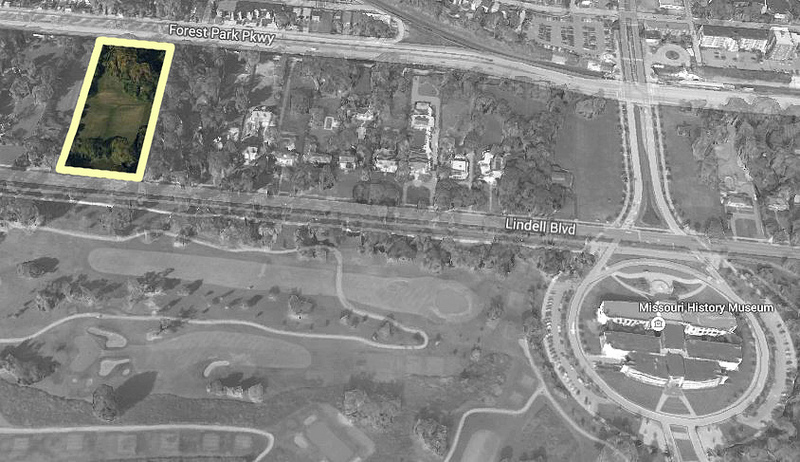 {Above: David Conner, recently retired and returned to St. Louis, and the lot at 5805 Lindell}

The design proposes a brick house with stone trim and a slate roof. The main house has a projecting center bay and steep hip roof. It is separated from a garage wing by a porte-cochère. Together, the main house and garage wing match the height and massing of other buildings along Lindell Blvd. The city’s Cultural Resources Office is recommending that the Preservation Board grant preliminary approval to the design provided that Cultural Resources be able to review and approve of design details.

{Above: Lindell facade. Below: Massing study for 5805 Lindell}

The lots along Lindell Boulevard between Skinker and DeBaliviere form the 100-acre Catlin Tract, a private development begun in 1909. Together with the houses stretching east to Kingshighway, Lindell comprises the finest collection of single family residential architecture in the St. Louis region and one of the finest in the United States.

The original deed restrictions for the Catlin Tract are still in place and are enforced by a board of trustees. Those restrictions limit each lot to single family use with a defined setback from the street. Less helpful is the stipulation that a new house cost *at least* $5,000 to build. Such a sum was more impressive in 1909, when a Carnegie Library might cost as $5,000 – $10,000. The minimum construction cost was later increased to $12,500.

Since 1978, the area has been included in the Skinker-DeBaliviere-Catlin Tract-Parkview Historic District. The ordinance establishing the local district requires new construction to respect the massing and proportion of surrounding structures. However, the district does not mandate any particular style of design. “It is not the intention of these regulations to in any way discourage contemporary design which through careful attention to scale, materials, siting and landscaping is harmonious with the historic, existing structures.”

The homes east of DeBaliviere are not covered by the Catlin Tract restriction or historic district. 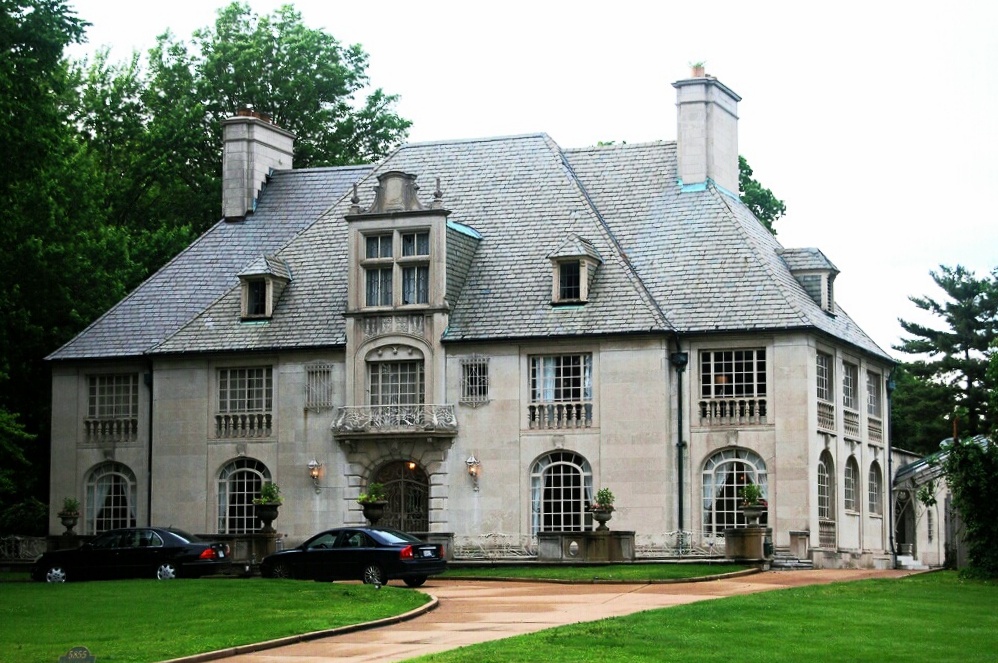 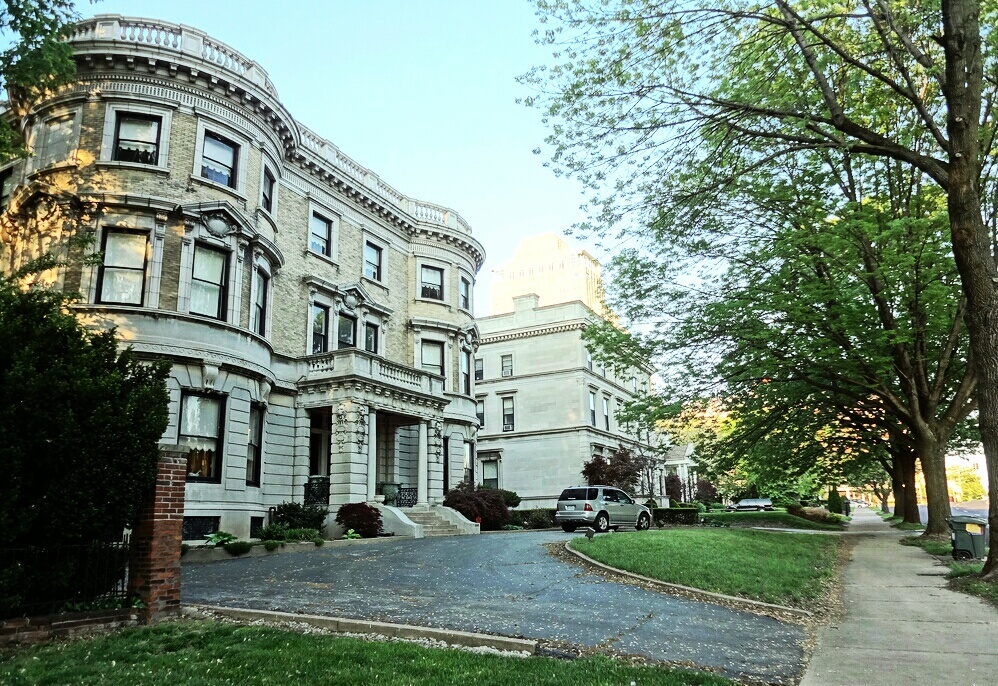 The past fifty years have brought mixed results to the architectural fabric of the street. During that half century, only sixteen new homes have been constructed along the two mile stretch of Lindell Boulevard that faces Forest Park. And they range from some decontextualized suburban houses built in the 1960s and 70s to some of the region’s best modern residential architecture.

All of the suburban-style homes bult between 1964 and 1980 are of much smaller proportion than their earlier neighbors. A faux mansard suburban style house at 6025 was bult in 1965, while a hip roofed one was built at 5949 Lindell in 1972. Still smaller are the three houses built in 1978 just west of Union Blvd. Similarly-scaled houses at 5635 (c.1967) and 5705 Lindell (c.1979) flank DeBaliviere at Lindell. The faux tudor at 5941 was the last of these suburban houses and was built in 1979. any of these homes would fit nicely into a Chesterfield or Ballwin subdivision. Yet here these structures fail to hold their own in the company of giants and are likely to fall at some point to make way for new construction. Already, their lots hold much more value than their structures. 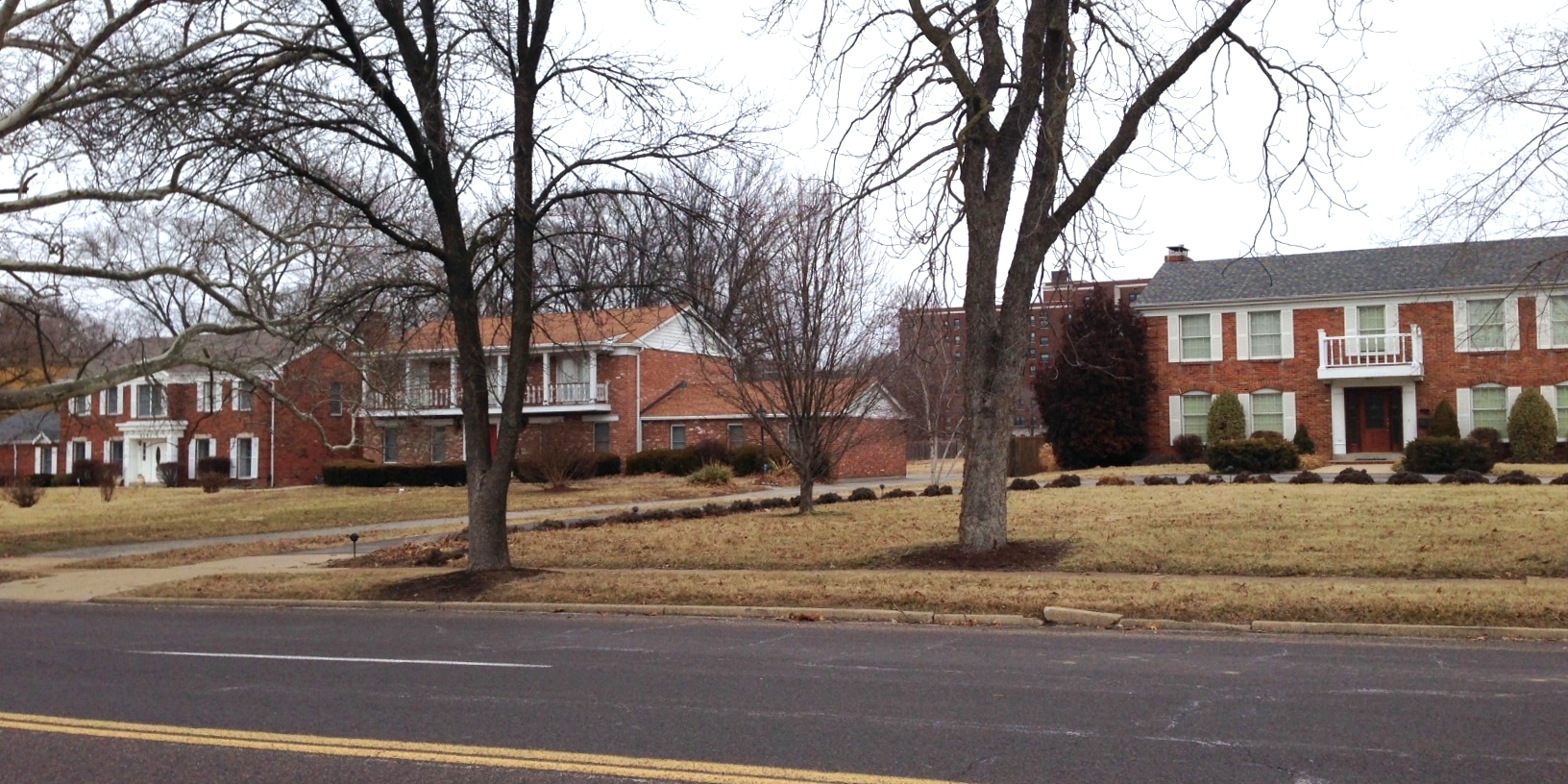 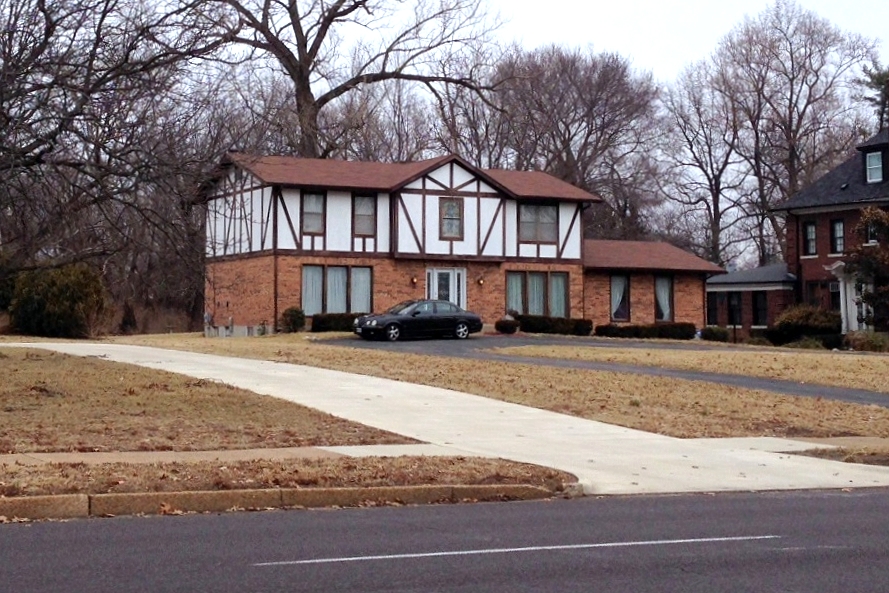 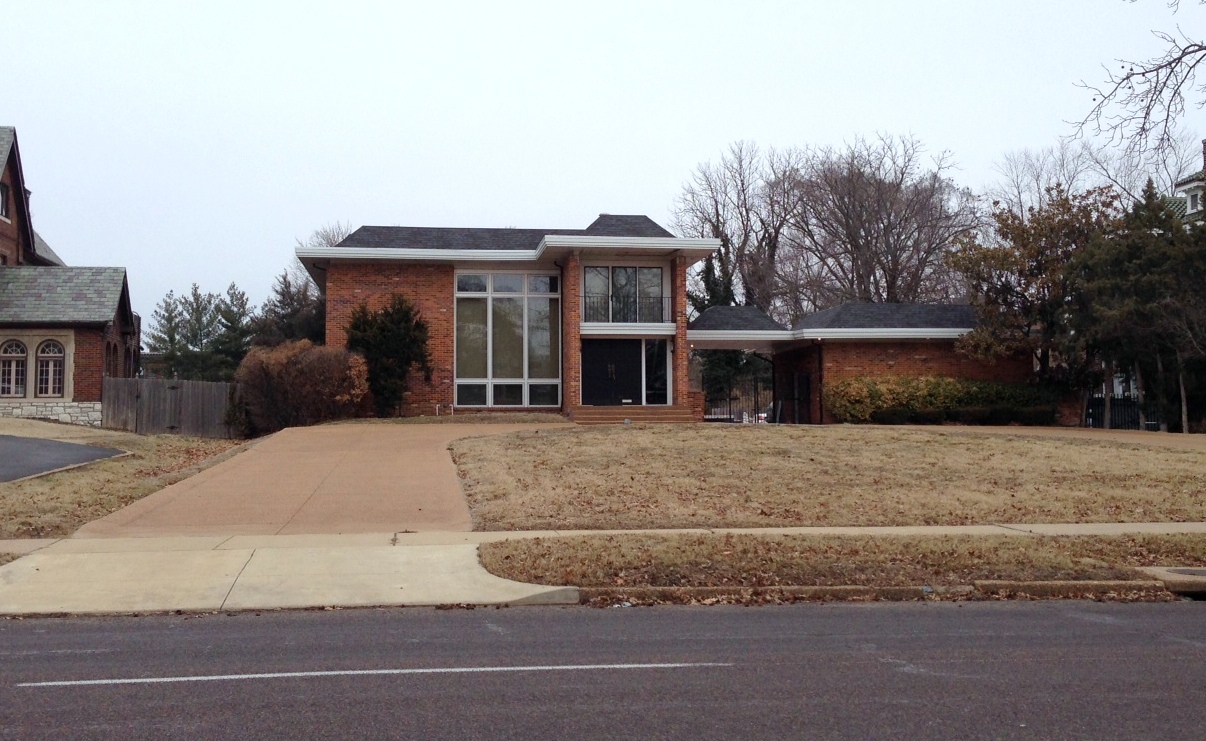 At least one house from the 1960s–the house at 5583 Lindell built in 1966—deserves honorable mention as a standout among its class. While its style currently is out of fashion and the facade admittedly is much lower than its neighbors, the clean vertical and horizontal surfaces and large expanses of glass and brick help this house maintain a presence on the street. There are no windows punched through the facade walls… only pure brick walls with glass in between. The brick fields on the facade are obscured by the landscaping. The simplicity and sophistication of the design goes unnoticed today in large part because of the roof. Or roofs. The four neo-mansard roofs joined together by strong horizontal cornice lines help organize the facade. But beginning in June 1969, this roof form became mandated for all McDonald’s franchises. In 1966, though, this was a pretty good design.

The decline of design standards on Lindell Blvd in the 1960s and 70s began to reverse in the mid-1980s as property values rose and as surrounding neighborhoods like Skinker-DeBaliviere, DeBaliviere Place and the Central West End saw revitalization.

In 1985, Mike Roberts began work on his house, 5025 Lindell, the home closest to Kingshighway. While the house has seen several additions since, the resulting structure is much closer to the proportions of the earlier Lindell mansions. And while some may mistake the postmodern facade with its glass and gold for the Saudi consulate (a fact not helped by the exaggerated topiary and fleet of luxury cars parked at any moment in the drive), this house marked a turning point for the boulevard. The proportion and materials alone make this the house that brought Lindell Blvd. back from a depressing two-decade funk. 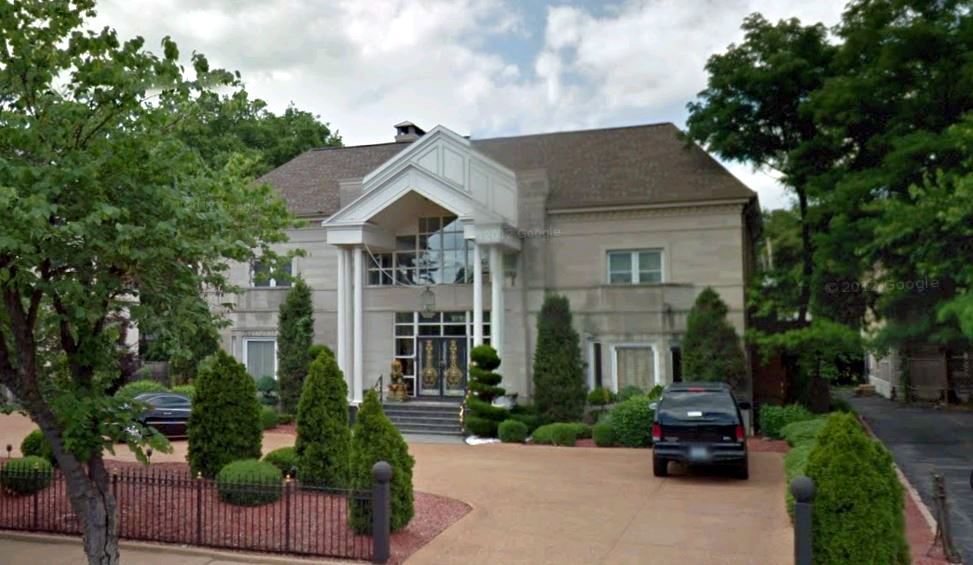 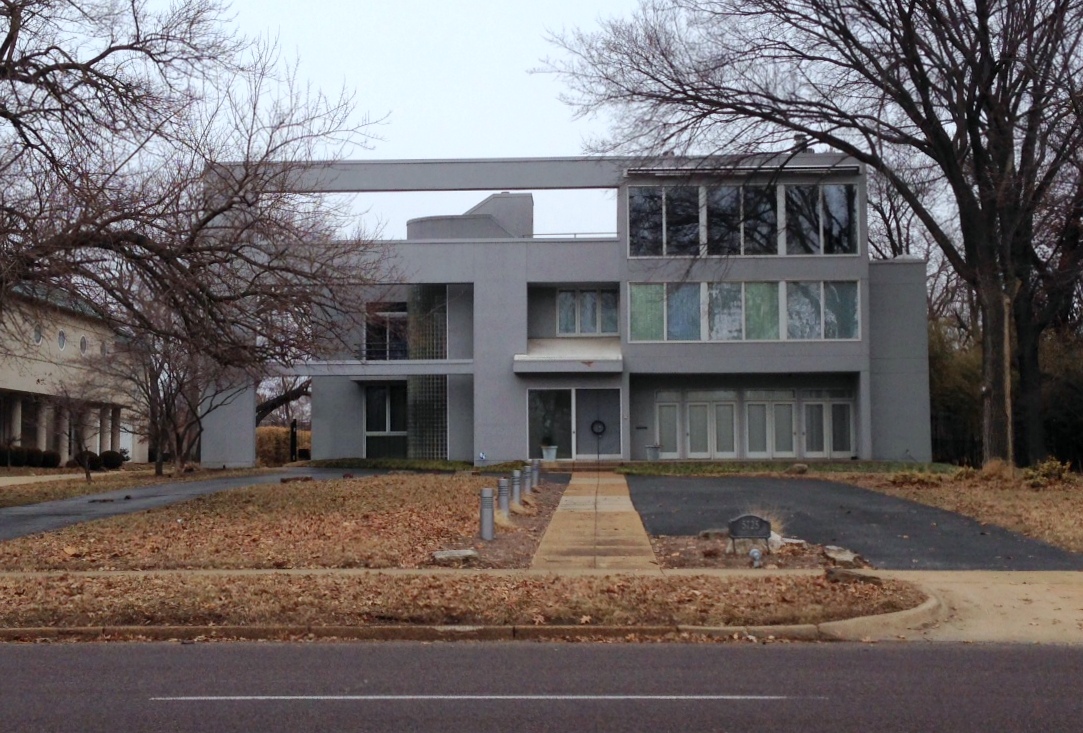 {Above: The Roberts House and The Smith House}

That same year saw the return of truly great architecture with the construction of the Smith House several blocks west at 5725 Lindell. Designed by architect Gary Glenn, this International Style design (originally stark white plaster, but since painted gray) includes a formal facade extending over the drive so as to match the proportion of the Beaux Arts houses facing the park. The house makes a crisp and unabashadly modern statment. Nearby residents remember the owner appearing on the front lawn at the same time like clockwork every morning, dressed in impeccable if eccentric black silk pajamas, walking like a sentry into the yard to collect his daily Post-Dispatch.

The Smith House was joined in 1994 by the Viator House next door at 5735 Lindell. Designed by St. Louis architect Paul Marti, the Viator House floats on columns above a glass entry level, one end of the super-structure curving overhead like the bow of a ship. The result maintains the proportions of the older structures and meets the modernity of the Smith House, but the result is warmer and more accessible, even if less bold than its modernist stucco neighbor.

Also in 1994, work began on the yellow chateau at 5373 Lindell, west of Union Blvd. This structure was designed by the homeowner as a donut-shaped plan arranged around a central corridor. The owners, wanting a single-level design, added a second level only along the facade–an upper level space planned for the guest quarters that took years to materialize. The least successful of the more recent five designs, the chateauesque details become less convincing the closer one gets to the building. 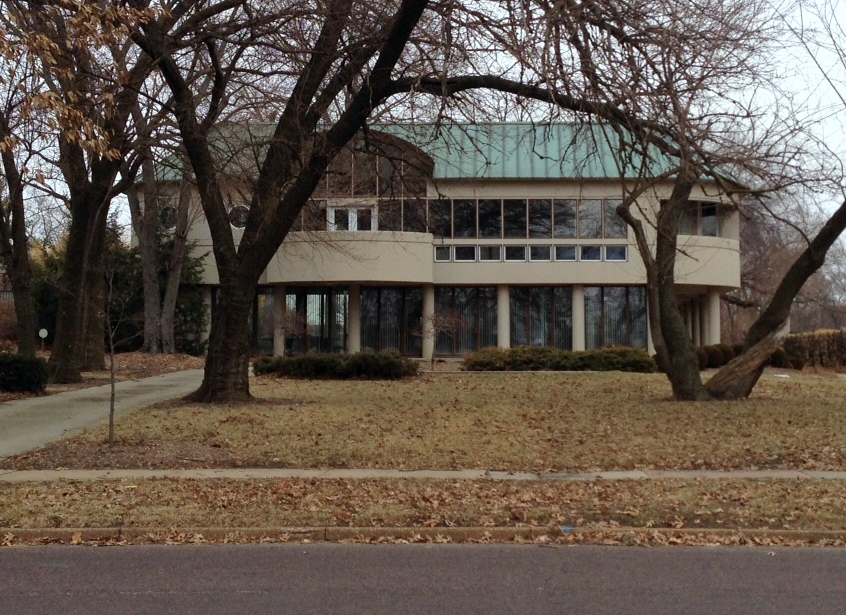 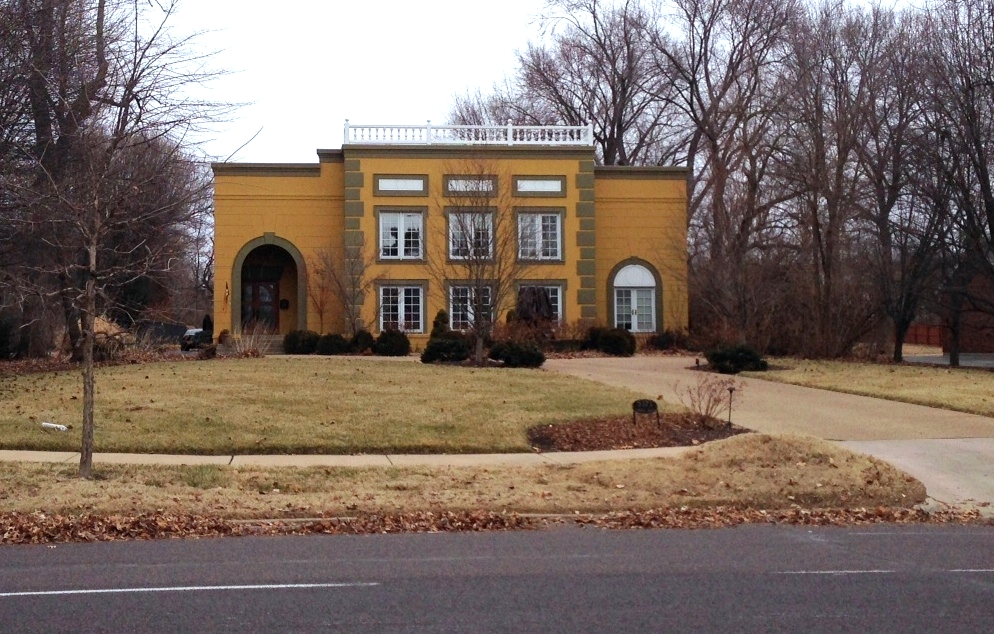 Itself like an over-stuffed pizza, the structure at the northwest corner of Lindell and Des Peres was built—and later despised—by the late pizza-maker Mike ‘Talayna’ Faille. While the home maintains the grand scale of Lindell mansions past, it sits uncomfortably on its street. (Perhaps this sense is due partly to its suburban-scaled neighbors on either side.) Begun in 1991, the house at 6023 Lindell stood uncompleted for several years before a new owner finished the work in 1996. I’ve always wondered whether a good landscape architect could help raise the stature of this house so that it matches the structure’s physical size.

Across from the Cricket Drive entrance to Forest Park, BSI constructed the Shaughnessy House at 5545 Lindell in 2003. The stripped-down, Federal style, red brick home sits atop a raised stone platform with formal garden in front. A stately and well proportioned house, the well articulated entrance and stone window surrounds present a formal facade that easily holds its own among its historic neighbors. 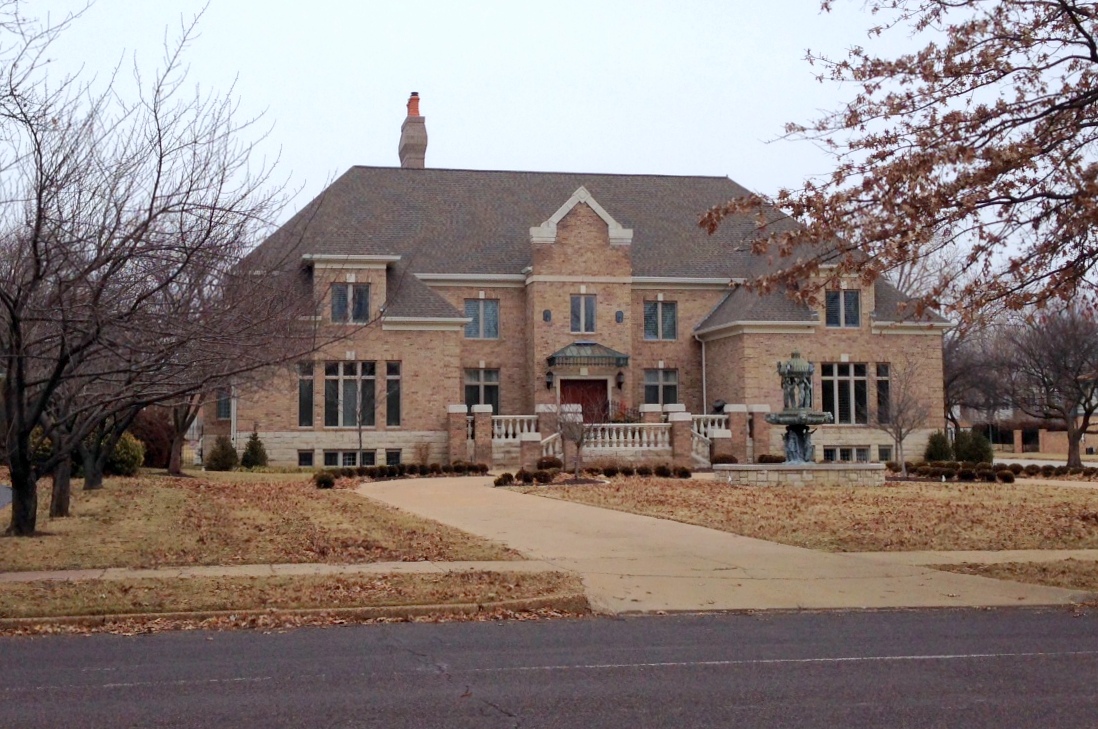 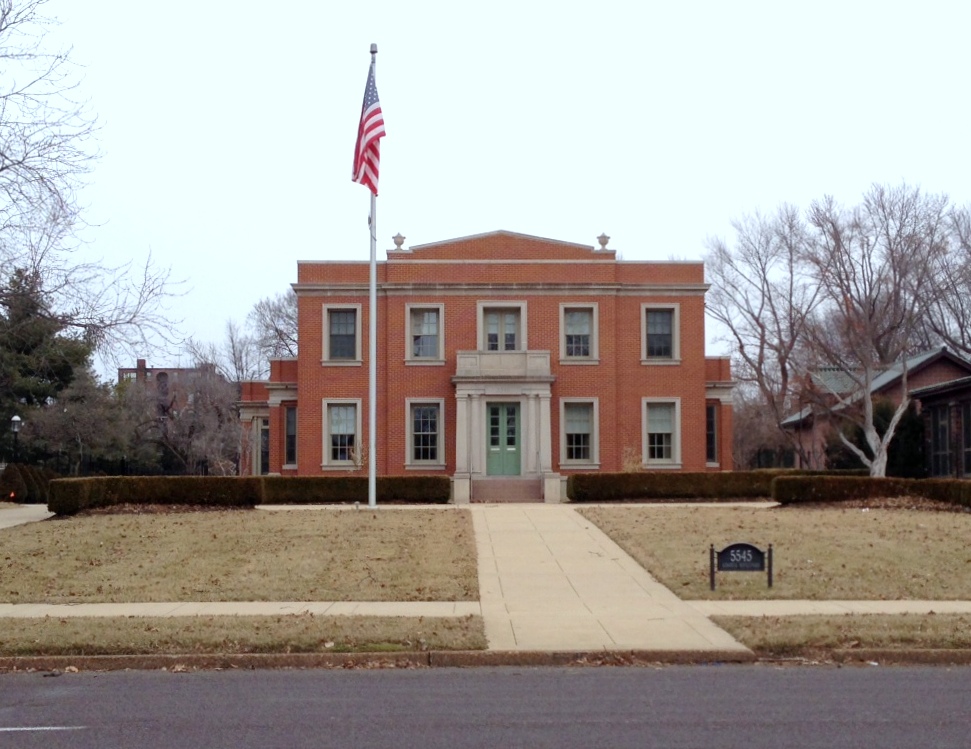 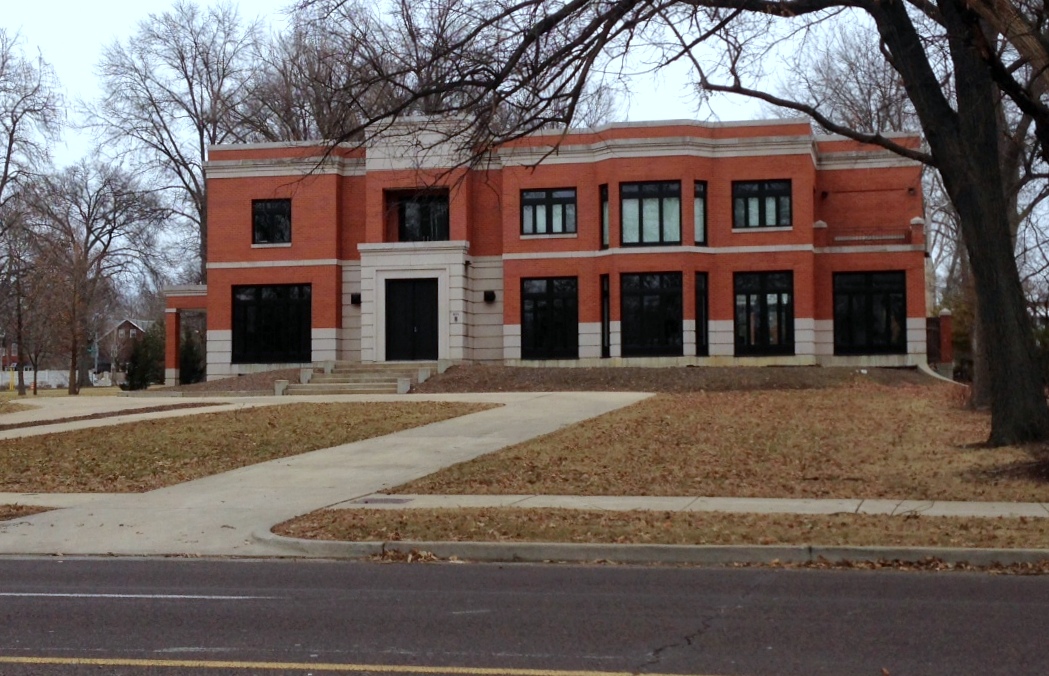 {Above: 6171 Lindell, until now the most recent addition}

The most recent new house on Lindell is the home of architect Karl Grice, which was issued a permit in early 2004 and completed in 2007, on the lot nearest Skinker at 6171 Lindell. Karl is a past president of the St. Louis Chapter of the American Institute of Architects. Many know this as the brick house with no landscaping and little furniture inside. It is not known whether these choices are intentional statements of minimalist design or something else. (I for one like the clean landscape.) While the building is a fine one, it leaves one longing for a strong and bold architectural statement… for new construction that can match the brilliance and power of Lindell’s older houses. It leaves one hoping for another Smith House.

For those who share this longing, Conner’s proposal leaves us longing for something more adventurous, more progressive and world-class. Certainly most St. Louisans will consider the proposed house a fine design. But for those dreaming of the avant-garde, this is a very safe, very familiar design. We’ve seen this house before.

As with most traditional design, I suspect that the house as proposed will rise or fall based on the execution of the details. The Cultural Resources Office will have authority to review and approve of design details. The quality of the masonry, the depth of the façade and the detailing and landscape will determine whether this house becomes a keeper.

Honestly, given the builder’s evident preference for historic forms and materials, I wish the architect would be bold and flip the house around. This suggestion could be something I ate … or maybe something I drank. Or perhaps my judgment is clouded by a particularly long work week. But I suspect a crazy 180° maneuver might be the best path forward. With the exception of the garage door, I just find the rear elevation far more interesting than the front façade. Imagine that wide expanse of glass doors opening out onto a front patio and the grand vista of Forest Park. Think about sipping your morning coffee seated on that upper balcony as it pulls in the warm Spring breezes that sweep across the Probstein Golf Course. I’d like to see that rear elevation be the side that faces Lindell. Combined with an impeccable eye for detail, such a move could make this house a warm, approachable—and yes, traditional—yet still unique contribution to one of America’s best streets.

And for those of us still dreaming of the very best international design, there will be many opportunities ahead as the suburban-scaled houses of the 1960s and ‘70s become tear-downs in the coming decade. 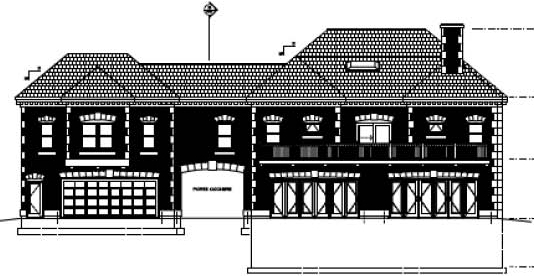 {Above: Rear elevation. Imagine this as the front… minus the garage door.}