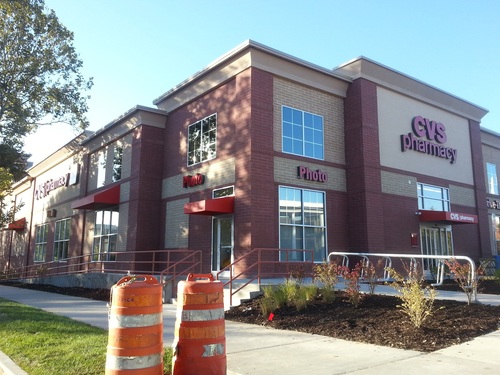 A new CVS Store located at 3925 Lindell in the Central West End neighborhood is now complete. The building was constructed at a cost of $2.8 million.

Below is a photograph of the new CVS, which sits just east of the newly reconstructed 3949 Apartments. CVS caused controversy in the Central West End when it proposed the demolition of three buildings, including the old St. Louis Housing Authority headquarters, near the corner of Lindell and Sarah. After being rebuffed by neighbors who were concerned with its drive through and its liquor sales, CVS set its sights a block to the east—the AAA building, a darling of the St. Louis preservation community. The City’s Preservation Board denied that demolition, and ultimately the iconic round AAA building was spared.

Instead, CVS sought to tear down the nondescript, neighboring AAA garage structure and build on that site. Nearby neighbors expressed a wish for an “urban-formatted” store flush with the sidewalk. Finally, then, CVS got its Lindell store approved. Read the nextSTL description of the CVS saga here.