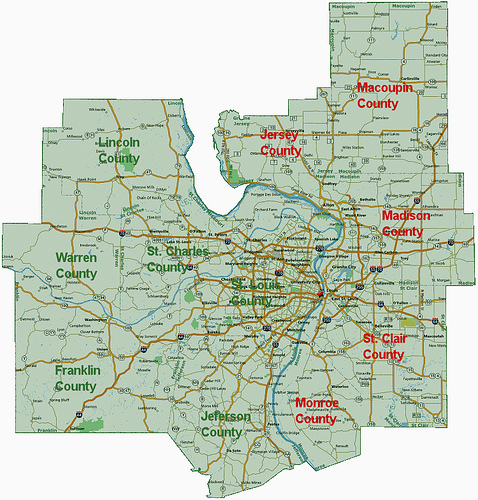 The governmental and taxation system in greater St. Louis is broken. The results are clear as the region continues its slide towards insignificance. The system encourages dysfunction, fosters intraregional competition, discourages leadership, has perverse incentives, squanders assets, stymies efforts to tackle problems, wastes tax dollars on redundant projects, and generally rearranges the deck chairs on the Titanic. The full potential of the region in its great people, assets, quality of life, institutions, and communities is not being realized.

It perplexes life-long residents, transplants, and outsiders alike. Why does the City of St Louis and St. Louis County each need its own crime lab? Why does Clayton and Richmond Height each need a new police HQ? How are towns that are unable to pay for police services allowed to continue? Why do towns take homes via eminent domain and give the land to developers for low-paying retail? Why are we portrayed so badly in national rankings? Why does someone in Wildwood pay ZMD tax and someone in St Charles does not? Can we possibly have 90 good mayors? Why does the region have such low self-esteem? Who benefits from the status quo?

The Joint Interim Committee on St. Louis Metropolitan Statistical Area Governance and Taxation was created via House Concurrent Resolution 25 on the last day of this year’s legislative session. Sponsored by Rep. Sue Allen, it created the committee and authorized it to commission an independent study of the area’s governance and taxation system, which will hopefully lead to reform legislation. The committee is made up of six Republicans and four Democrats, five from the House and five from the Senate. It is chaired by Rep. Sue Allen and the vice chair is Sen. Eric Schmitt. The research cannot be paid out of state moneys. There should be a few studies, and regional institutions should step up to fund them.

Chairwoman Allen said, “This committee has no preordained outcomes and recommendations will largely be based on public testimony. It is essential that we hear from citizens as the committee process moves forward.” In that spirit here are my suggestions for the committee:

First we must recognize what one government entity does often affect many others. One muni steals a retailer from another. Developers and businesses play one part of the region against another. One muni wastes money in one area while getting a state or federal grant for something else. A TIF that does not create new jobs or new revenue takes money away from a school district. Criminals don’t care about borders. An unflattering headline paints the whole region.

City Reentry
The city in no way needs to be its own county. The city needs to focus on its other responsibilities. The “great divorce” was pushed by people in another time for reasons irrelevant today and deemed to pass by a judge after a sham election. Reentry is not merger. Reentry means the city will be another municipality in the county. This means the county delivers its services to city residents in the way it does for the residents of any of the county’s 90 municipalities. City property pays the county property tax levy, which should lead to a lower levy for everyone. City residents get to vote for County Executive and Assessor and have representation on the county council. The city will have some influence on county business and the county will have some influence on city business. If that bothers you, I ask how has the separation been working out for us?

I suspect you will find that St. Louis County is able to perform its duties on a per capita basis more cheaply than the city does. For example if the Board of Elections of St. Louis County could deliver its services to the City of St. Louis at the same per capita rate it does already (no economies of scale), $1 million would be saved (Caution: back-of-the-envelope calculation. I may have made assumptions I don’t realize).

TIF Reform
An East-West Gateway study showed how ineffective the TIF wars have been for the region. Over the last 20 years 80% of TIF dollars have gone to retail. Surely retailers would still have wanted to sell us stuff without them. The region has way too much retail space per capita, and we wonder why we end up with so much empty retail space. The sales tax chase creates a perverse incentive for municipalities to build the latest development in order to vacuum up shopping dollars from its neighbors, with no net gain. Also the TIFs take away tax revenues from other taxing districts. Citizens are wising up as the drama in Ellisville demonstrates. Retail is not economic development, it is the result of it. Imagine if all those incentives went to luring companies from out-of-town or expanding our own base of business. The Cortex development will create many high-skill, high-paying jobs that will bolster retail and other sectors. Similar projects should be the focus of tax incentives.

In 2012 Sen. Scott Rupp of Wentzville and Rep. Anne Zerr of St. Charles introduced legislation that would prevent a city council from overriding the county TIF commission in St. Louis, St Charles, and Jefferson Counties (St Louis City is not included because it is its own county- another reason for reentry). The municipality could vote to put in front of voters of the whole county. A two-thirds approval would override the County TIF Commission, a tall hurdle for sure. No need for a study, just pass HB 1693.

Muni Accountability Scheme
The number of municipalities in the region is a luxury we can no longer afford. The tiny ones cannot cope with problems. Some are failing. Due to lack of resources, size, incompetence, and/or corruption they simply can’t make it. They hide corruption and waste under the cover of obscurity. They chase sales tax dollars or set up speed cameras to fill budgets. They leave infrastructure to decay. When they finally call it quits they stick us with the bill. The longer they are left to dither the bigger the bill gets, and the longer the citizens of those munis have to put up with sub-standard services.

The St. Louis County Municipal League has proposed an accountability scheme akin to the one for school districts. Rep. John Diehl sponsored HB 1891 in 2012 with their plan. If citizens feel that a muni is failing to meet at least three of twelve standards a petition signed by 30% of the number of voters can start the process. Ultimately if the muni doesn’t shape up it becomes easier to put up for vote and pass a measure to consolidate with a willing neighbor or disincorporate. Other ways to encourage consolidation or disincorporation should be explored. Perhaps there should be a vote every five years on disincorporation for munis under a certain population. Perhaps the state should join in on the 24:1 project by Beyond Housing and encourage the 24 munis in the Normandy School District to consolidate. It would have 42,000 residents and no doubt be a stronger town. The bottom line is that the numerous tiny munis leads to a lot of inefficiency.

Sales Tax Pool Expansion
St. Louis County has some point-of-sale cities and some pool cities. Some cities are split. Since cities can’t enact income taxes and property tax increases are very unpopular this leaves sales taxes and speeding/red light tickets as possible revenue generators. The sales tax chase has created a perverse incentive for point-of-sale cities which along with TIFs have shuffled retail around the region. Why attract a business with high-paying and/or numerous jobs if it doesn’t produce sales taxes? Why not use eminent domain to force out residents and businesses in favor of a sales tax generating big box? We are spinning our wheels. It has to stop. Put all of St. Louis County in the sales tax pool.

Once concern about city reentry is how the city would factor into the pool. My calculations show that the city would be a net taker of about $3.5M (Caution: back-of-the-envelope calculation). With the rumored IKEA and Midtown Station developments the tide may change.

ZMD Expansion and Reform
The Zoo-Museum District has been a great example of the city and county working together. Since its creation the city and county have fallen to less than half the region’s population. The feeling is that the rest of the region is getting a free ride. St. Charles, Jefferson, and Franklin County should have the option of joining the ZMD. Perhaps at a quarter of the levy for counties without an institution, ½ the levy if they have one (Franklin County has the Shaw Nature Reserve), and full levy if two or more. Then the levy could be lowered for all.

Expansion is doubtful without reform. The recent attendance padding, History Museum land deal, and Science Center executive pay scandals indicate that the ZMD needs reform. At the very least the board should reflect the present contribution of resources, and if a county joins the ZMD, they should get some board members.

Regional Port Authority
The airport is a regional asset; why does the city own it? We should have a regional port authority for the region’s airports and river ports in order to better leverage these assets in the global marketplace. It should include the Illinois side.

Sprawl Restraint
The horizontal development pattern isn’t working well for us. St. Louis County is in a similar place today that the city was 50 years ago. What’s to stop the county from losing 100k people per decade? As we continue to spread out, jobs are harder to get to, much wealth leaves the region through spending on cars and transportation, and synergies are not leveraged because businesses in a certain industry aren’t located near each other (BJC/WUSTL/Cortex vs Scottrade/Edward Jones/Wells Fargo/Stifel). The state should at the very least stop subsidizing infrastructure for development that cannot possibly generate enough economic activity to pay to maintain and eventually rebuild that infrastructure. Instead we should work on enhancing areas that are already built and productive so that they do not become abandoned and a liability.

I hope this process will lead to a broad, constructive discussion and study (in some cases studies are already done) of the region’s issues and not just more talk. The most important goal of the committee’s work should be that real, passable, effective reforms make it to the governor’s desk or are put in front of voters.