This is the first of a three-part series about high speed rail in Missouri:

A lot has been said and written about high speed rail (HSR) in the United States over the years. Yet, there are no true dedicated HSR lines in the US today. Currently, the closest thing is the Acela train in the northeast corridor, connecting Boston to Washington D.C.

The Acela electric train reaches a top speed of 150 MPH – which may be fast enough to consider it HSR – but the average speed between D.C. and New York is only ~82 MPH, and on the New York-Boston segment this drops to ~63 MPH, which makes the average speed over the entire route ~72 MPH.

Construction of new track is underway between Chicago and St. Louis, with the goal to increase speeds to 110 MPH on certain segments. This will result in about an hour less travel time – from 5 ½ to 4 ½ hours – between the two cities. Faster trains at a higher frequency are a welcome improvement over the current situation but it would be a stretch to call this HSR. It is not. The average speed between Chicago and St. Louis will increase to only about 60-65 MPH. 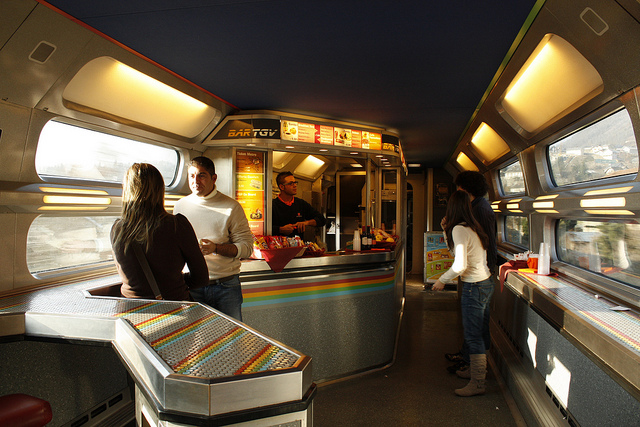 High speed rail is not rocket science. The first TGV train route between Paris and Lyon opened in September 1981 – 32 years ago. The first Japanese bullet trains rode in 1964. HSR is a true and tested technology that has been successfully deployed all over the world.

So why is it that the US currently cannot compete in the high speed rail arena?

The lack of high speed rail in the U.S. can probably be partly attributed to cultural differences and politics – not just to geographical, technological or economic obstacles, although these surely exist. So, let’s investigate if true HSR could be built in Missouri and – more importantly – whether it would be economically feasible to operate and maintain a high speed rail line in our state.

Typically, the first objection heard from HSR opponents is that it cannot be operated profitably and that indeed it would cost (taxpayer) money to keep it running. Regardless of whether this is a true statement; the same could be said about highways. Highways are built and maintained at a huge cost to the taxpayer. Some $600 billion has been transferred from general- to highway funds over the last 50 years, because gasoline taxes, tolls and other user fees do not suffice. Today, user fees pay for about half of the total cost of building and maintaining our highway system.

Just take a look at what Missouri legislators proposed earlier this year: a 1% increase in general sales tax to supplement insufficient local and state infrastructure- and highway funds. This 10-year tax measure would have generated some $8 billion in new monies – the majority to be allocated to new highway lanes on I-70 between Kansas City and St. Louis. [Bill SJR16 was ultimately defeated.]

At the same time, Americans are driving less and are doing so in much more fuel-efficient vehicles, thereby decreasing even more the revenue from fuel taxes. Continuing a highway-building policy will become a never-ending cycle, requiring ever more investment, only to be funded by future tax increases. 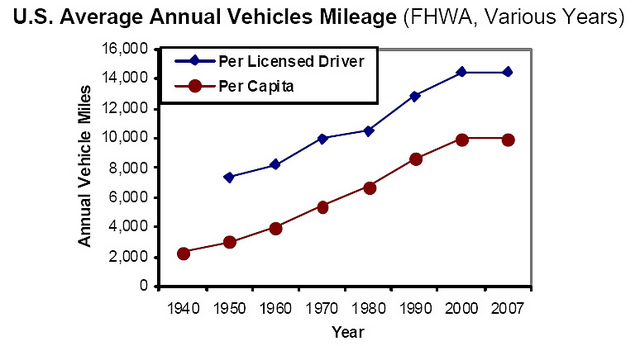 {The average vehicle mileage in the U.S. is flattening}

So what if we decided: no new highways. We’ll keep the system we have; we’ll fix and maintain our existing infrastructure – like Missouri’s 6,893 structurally deficient/functionally obsolete bridges and 31% of the state’s roads in poor condition – and focus on other means of transportation, like high speed rail.

Important questions we should ask before we start such a venture:

Let’s start with the first question: Where should the line be built and how much would it cost?

When you look at Missouri’s demographics this first question is fairly easy to answer. There are two large population centers – Kansas City and St. Louis – together responsible for about 75% of the state’s economic activity. There is no doubt the line should be built between these two cities.

The current Amtrak train takes riders on a 5 hours and 40 minutes journey at a frequency of only two trains a day. By building a dedicated HSR track between Blue Springs and Wentzville, travel time could be slashed to an hour between those two cities and to less than two hours between the downtowns of KC and STL.

Building a 191-mile dedicated HSR track would cost – based on an estimated $35 million a mile* – around $6.7 billion. Electrification of existing rail and adding new track to and from downtown Kansas City and St. Louis would add another $2.0 billion, for a total of $8.7 billion for the entire 248 mile-long track.

[*The estimated cost of building a dedicated high-speed track vary from a low of $10 million to a high of about $80 million a mile, depending on the terrain or on whom you ask. Missouri is fairly flat, no mountains have to be tunneled through, and only one major bridge must be built over the Missouri river. For comparison: The Florida HSR line between Tampa and Orlando was projected at $27 million per mile. California’s mountainous terrain puts HSR track cost there closer to $80 million per mile. France is currently building the LGV Sud Europe Atlantique line at $35 million per mile.]

And how would we pay for this?

Let’s assume (and this is crazy) that Missouri indeed decided to raise the general sales tax by 1%, but would allocate it fully to this project. The first $8 billion would be secured. Add to that $1 billion in federal matching grants and other infrastructure funding over the next ten years and project financing is a done deal.

As the sales tax proceeds become available over the 10-year lifespan of the measure, the HSR track could be built accordingly. If we wanted to build faster, bonds could be issued against the tax measure. And now would be the time to do so, to benefit from the current historic low interest rates.

In part 2 we will investigate whether HSR trains can be operated profitably; what a timetable would look like, and if HSR would be able to compete with other means of transportation in Missouri.