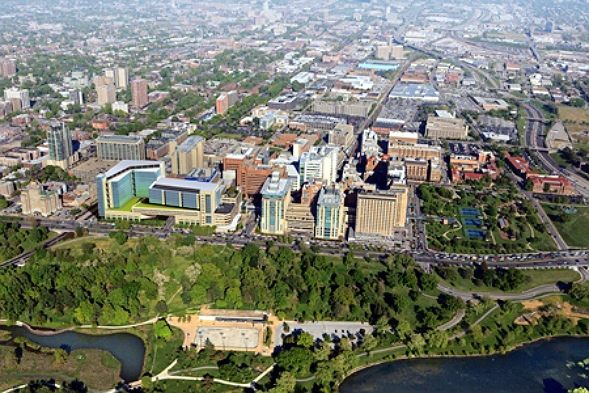 According to WhoLou sources BJC is considering increasing the first and second phase budget for their $1.2 billion multi-phase Kingshighway campus expansion to $600 million. The first two phases were initially expected to be completed within three years at a cost of $450 million. Independent sources allege that BJC representative Jacobs Engineering believes the review is necessary due to higher costs associated with the design by project architect HOK .

The long term expansion is expected to take 10 years to complete and is one of the largest and most expensive healthcare projects in the U.S. It will modernize the 16-block Central West End medical campus which includes Barnes-Jewish Hospital, St. Louis Children’s Hospital, and the Washington University School of Medicine. The project is expected to create several thousand jobs and add nearly 2 million sq. ft. of new construction and renovated space. MetroLink’s Central West End light rail station will also be overhauled as a component of the project. {the existing Central West End station, the system's most heavily trafficked, will see a complete overhaul}

Sources believe that BJC will most likely increase the phase one and two budget but not likely as high as $600 million. The expansion is being managed by the ACW Alliance which consists of Alberici, Clayco, and S.M. Wilson. Demolition firms are expected to be chosen by October with work set to begin immediately thereafter in November or December. Sources further allege the existing foundations of two buildings slated for the wrecking ball will be kept intact. BJC expects the first two new buildings of the project to be completed by 2017. The first phase will concentrate on the north campus and includes an expansion of Children’s Hospital with enlarged diagnostics and treatment spaces. Additionally the project calls for more space for faculty practice clinics, community physician practices, and expanded clinical care at the Siteman Cancer Center. The original Jewish Hospital on the site, and the Steinberg and Yalem building additions as well as the original Jewish Hospital School of Nursing building will be demolished as part of the project. City approval for these demolitions was granted in March as reported by nextSTL. (Massing study for north campus phase at right)

The south end of the campus will focus on increased critical care and private rooms. Both phases of the project are expected to include changes to parking, traffic flow, and will be designed to allow for easier navigation by patients and visitors. An attempt to reach BJC vice president of corporate and public communications June Fowler for comment was unsuccessful.

The budget increase would not be the first unexpected big change for the project. In July of 2012 WhoLou reported that BJC had replaced their original representative  Gilbane with current representative Jacobs Engineering. Shortlisted general contractors were stunned that the switch had been made this late in the selection process. They allegedly found out when Jacobs representatives greeted them at their final interviews which were expected to be conducted by Gilbane.

Sources further allege the relationship between former BJC vice president of planning, design, and construction Steve Cockerham and Gilbane was always an uneasy one. Cockerham was very instrumental in both orchestrating the last minute project manager switch and hiring HOK according to WhoLou sources.

WhoLou first reported that by December of 2012 (five months post Gilbane/Jacobs switch) Cockerham had left BJC for Jacobs Engineering. According to Linkedin Cockerham is currently working on the Cleveland Clinic currently under construction in Abu Dhabi, United Arab Emirates.