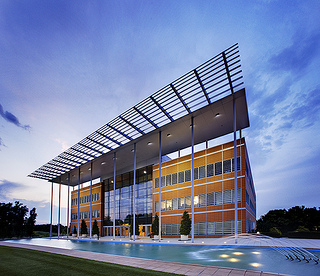 Though St. Louis County does not require any minority participation WhoLou sources allege Monsanto has set a corporate goal of at least 20% minority business enterprise (MBE) involvement for their $400 million Chesterfield campus expansion. The 400,000 sq. ft. LEED certified expansion will feature 36 greenhouses, offices, labspace, plant growth chambers, and parking. Construction will allow space for the addition of 675 jobs and is expected to be completed in 2017.

The shortage of certified minority contractors and subcontractors in the region coupled with the demand for them created by municipal, state, or federal requirements facilitates slows movement on area projects according to sources. This is especially a concern on big jobs like CORTEX in the city. City of St. Louis goals stated in Board Bill 75 include 25% MBE and at least 5% women business enterprise (WBE) participation on jobs costing $1 million or more.

It is further alleged by WhoLou sources that Monsanto does not intend to renew the lease Pfizer has at the Chesterfield Village Research Center. According to the pharmaceutical giant’s website approximately 500 St. Louis employees are based at three area locations including the Monsanto Chesterfield campus where research is conducted.

The Pfizer lease is believed to expire in 2014 but the company also holds two one-year options according to sources. The two companies have significant history regarding corporate ownership and ownership of the campus which Monsanto built for $150 million in 1984.

In 2000 Monsanto merged with Pharmacia & Upjohn Inc. and changed its name to Pharmacia Corporation. The current Monsanto spun off from Pharmacia in 2002. The independent company focused solely on agriculture and leased space at the Chesterfield site from Pharmacia. The lease continued after Pfizer purchased Pharmacia in 2003.  In 2009 Pfizer cut 600 area jobs and sold the campus back to Monsanto for $430 million in 2010.

Danforth Plant Science Center – Sources further allege the Donald Danforth Plant Science Center in Olivette will start a large project in early 2014 that will also have a 20% minority participation goal. Preconstruction activity on the $35-$45 million building addition has already started. Landmark has been selected project manager and Christner has been selected architect according to sources

Landmark was project manager during construction of the 170,000 sq. ft. center which began in 1998 and was completed in 2001. The facility features a library, environmentally-controlled growth chambers and growth rooms, and 48 research laboratories. The additional construction is expected to add flexible laboratory space.

The center engages in research that attempts to enhance the nutritional content of plants, increase agricultural production to create a sustainable food supply, reduce the use of pesticides and fertilizer, develop new and sustainable biofuels, and generate scientific ideas and technologies that will contribute to the economic growth of the St. Louis region.

The Danforth Center was founded  through a $60 million gift from the Danforth Foundation, the donation of 40 acres of land and $50 million from Monsanto, and $25 million in tax credits from Missouri. It employs more than 200 and is a partnership between several public and private institutions including the Missouri Botanical Garden, Monsanto, Washington University, the University of Missouri-Columbia, Purdue University, and the University of Illinois at Urbana-Champaign.

The center nets nearly $11 million in annual grants and also houses the Enterprise Rent-A-Car Institute for Renewable Fuels, the Center for Advanced Biofuel Systems, and the International Laboratory for Tropical Agricultural Biotechnology.