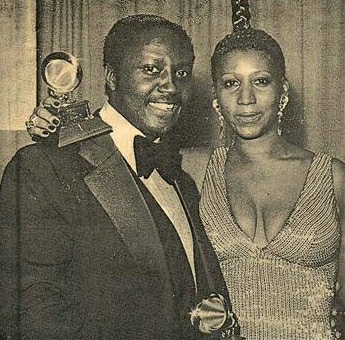 Hathaway was born in Chicago but raised from a very early age in the Carr Square neighborhood of St. Louis with his mother’s family. His grandmother, Martha Pitts, was a gospel singer of some notoriety and Hathaway grew up singing at Trinity Baptist Church with her.

He sharpened his piano skills at Vashon High School graduating in 1963 and received a fine arts scholarship from Howard University in Washington D.C. While at Howard Hathaway majored in music theory and met his future duet partner Roberta Flack with whom he would go on to have great success.

Hearing him play “The Ghetto” at an area D.C. club legendary saxophone player King Curtis introduced Hathaway to the even more legendary Jerry Wexler of Atlantic Records. After signing Hathaway in 1970 Wexler stated, “I think we have found our third genius (Ray Charles, Aretha Franklin).” In 1972 Hathaway recorded two Gold records and won a Grammy with Flack in 1973.

Edwards commented that 21-year-old 2013 Grammy Award nominee Ed Sheeran twice mentioned Hathaway as a major influence recently while at a meet and greet with fans in the Blueberry Hill Duck Room and later that evening at the Pageant during a sold out performance. Upon request Sheeran joined rock and roll icon Elton John in a performance during the ceremony last night in Los Angeles. Sheeran’s “The A Team” lost to “We Are Young” by Fun featuring Janelle Monae for song of the year. Donny Hathaway’s influence can also be seen in such other contemporary artists as John Legend, Lauryn Hill, and Justin Timberlake whose 2012 wedding first dance with wife Jessica Biel was to Hathaway’s version of “A Song For You.”

One of Hathaway's daughters is Stax recording artist Lalah Hathaway who Edwards has been unsuccessful in reaching regarding the honor. In this linked TV One television documentary Lalah Hathaway remarked that she had no memory of her father due to his absence from the family and early demise. In January of 1979 Hathaway, a paranoid schizophrenic, apparently committed suicide by falling out of his 15th-floor Essex House Hotel in New York.

Flack and Stevie Wonder were among the crowd at his St. Louis funeral and Jesse Jackson delivered the eulogy. Jackson commented, “How Hathaway died is not as important as how he lived. He lived the life of the genius that he was.” Donny Hathaway is buried at Lake Charles Park Cemetery in Bel-Nor which is also where St. Louis bluesman James Crutchfield is entombed.

The St. Louis Walk of Fame donates the book to every junior high school and high school in the St. Louis metro region. The book will also be available for purchase at local bookstores, Blueberry Hill, gift shops at public institutions such as the Missouri History Museum, and through the St. Louis Walk of Fame's website which will be redesigned by late spring. The current site has been up since 1997 and the change will be in keeping with the fresh design of the book according to Edwards.