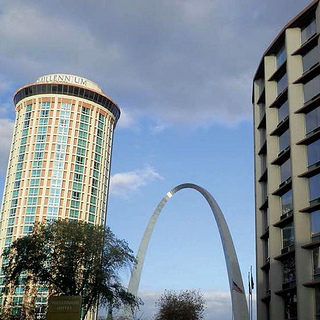 Nearly 250 buildings made their list of architecturally worthy buildings. That list was narrowed down to 40, and everyone from both the Cultural Resources Office and  the Missouri State Historic Preservation Office at Monday’s meeting reiterated how genuinely difficult it was to come to that new number. They all fell in love with certain buildings, harbored their favorites. Those in attendance were given a sheet of 16 stars to place upon the buildings we liked most. Here’s Michael Allen bestowing one of his stars upon a building he wrote about. Turns out this South Grand vacant bank is already under threat of demolition for a new independent grocery store building on the lot. And this highlights why it’s important to have this list of our significant MCM architecture: if one of these buildings should come under fire, there will be documentation to prove why it matters.

Among the final 40, it was thrilling to see buildings that I’ve covered previously in this blog. These include:

The AAA Building, Optimist Building, Engineers Club and the Archdiocese of St. Louis’ Chancery on Lindell Boulevard in Central West End. (They could save a little time and just declare Lindell Boulevard an Historic District, similar to what was done on Washington Avenue, downtown.)

David P. Wohl Community Center, whose architect of record, Richard Henmi, was on hand to place his star upon it, once again: Henmi, the architect of the Flying Saucer in Midtown, will also be in Jefferson City on February 27, 2013 as one of the people accepting a 2013 preservation award from Missouri Preservation. This is shaping up to be a special year for him, and all of us who love his work and those of his professional peers.

What Happens Next: They need your feedback by February 15, 2013 on which 20-25 buildings deserve further research to make the final list. Please review the 40 buildings. Download the comment sheet here, which also has information on where to send it.

In Spring, they plan to announce the 20-25 finalists that will get the full treatment of further
documentation and statements of significance that put them in historic context and serve as framework for the property owners and others to use for the architectural preservation and appreciation of these buildings.

Stay atop any breaking news on The Finalists by following Chris Madrid French on Twitterand Missouri Preservation on Facebook. Or just check back with B.E.L.T., ‘cos you know how freaking excited I am about all this!
______________________________

We live in and use the built environment everyday, yet we’re too often hesitant to speak up lest we sound stupid…. to architectural academics who don’t live in your world? Please. Let’s talk about buildings and spaces in a language we all understand. Let’s really see what’s around us rather than look. Let’s accidentally pick up some useful information along the way. Let’s dance!