According to WhoLou sources St. Louis-based national construction giant McCarthy has invested approximately $300,000 in capital and resources on the proposed $700-$800 million Eclipse Event Center in Republic, MO near Springfield. Sources further allege the huge project still lacks funding and is tied to a developer that is regularly being sued and not being forthright regarding financing. Office furniture and workspace solutions company Color Art and PayneCrest Electric are also alleged to be included in a group of area individuals and businesses that have invested considerably in the proposed project.

Proposed in January, initially at a cost of $350 million, the Eclipse Event Center plans to feature a 15,000-seat equestrian center that would host more than 20 major horse shows each year along with Professional Bull Riders events, charity events, concerts, conventions, and car shows.The project would also include a 300-room hotel, fitness center, water park, spa, 100-pad RV park, 60 cottages, 30 11-unit condos, 3,500 horse stalls, an 11-mile cross-country riding course, and a truck stop with motel and two restaurants. According to the Eclipse website, the truck stop and RV park is set to open in early 2013, while the more substantial projects will break ground in "late 2012" and are "on schedule to be completed in 2015". McCarthy is alleged to have been selected general contractor for the would-be project. 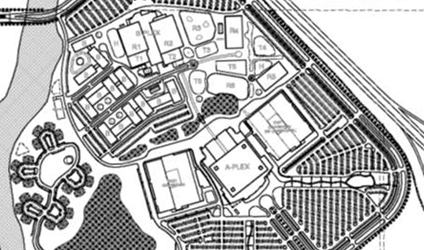 {a schematic plan for the sprawling Eclipse Event Center}

In January The Republic City Council  approved the annexation of much of the land needed for the project and in March the Republic Planning and Zoning Commission voted to recommend a zoning change in favor of the development to the City Council. WhoLou sources allege that Republic officials are now communicating with McCarthy executives to make sure developer Carl Scott is keeping his story straight regarding funding for the project. It is further alleged there are several property owners, growing increasingly frustrated with Scott, who have agreed to sell their land and need the deal to close soon so they can take advantage of current tax breaks.

According to WhoLou sources Scott would take investors and potential contractors on grandiose helicopter rides over the expansive 1,200 acre development site before awarding contracts tentatively to certain investors including McCarthy. He also allegedly told investors that ground would break on the project in July, be completed in just under three years, and create between 700 and 800 jobs.

Scott told the Springfield-News Leader in January that a hedge fund has agreed to provide $290 million to build the facilities and $60 million over three years to pay for its operating expenses but he also elected not to name the hedge fund. At differing times Scott has also allegedly offered area investors other insight on who will finance the project including telling investors the project could receive federal financing for creating more than 2,000 jobs over two years.

Most recently Scott told KY3 News in Springfield that the $700 million for construction was coming from nonprofit L.A.-based think and do tank/business incubator  Global Business Incubation of California (GBI). A call placed to GBI president and co-founder Tonia McDonald seeking comment resulted in an emphatic denial of these allegations Saturday, “GBI is in no way and never have been associated with this project or Mr. Scott. We have previously requested comments alleging so be retracted from the KY3 News item.”

A search of Scott on various state databases turned up a litany of litigation that has been filed against him or his Springfield-based JKC Contractors over the last several years including numerous breach of contract charges, mechanics liens, tax liens, and felony charges (eventually dismissed) in Taney County, MO for passing a bad check. Bob Garrett, JKC Contractors OSHA Administrator according to Linkedin, is also believed to be the other primary Eclipse Event Center developer from Springfield according to WhoLou sources.