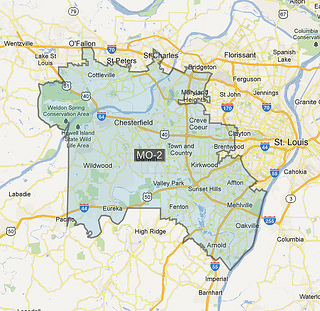 It’s an unfortunate fact, especially in recent days, that one of the most rightfully-maligned members of congress, Todd Akin, lives little more than a half hour drivefrom downtown St. Louis City. We are a metropolis with problems, of course, but one who can be more often be criticized for failing to craft a workable solution to economic disparity, crime, and equal rights — not ignoring these issues entirely, or arguing that we shouldn’t coddle hungry schoolchildren.

Akin doesn’t just represent the outer-outer belt either: his soon-to-be former 2nd District edges eastward to Kirkwood and Ladue — perhaps not the most City-friendly municipalities, but not too far removed. In 2010, he swept to victory with 68% of the vote; hardly a slim success. And even though, for years, his “at the heart of liberalism really is a hatred for God” sentiments have garnered him a fair amount of national pushback, his recent, abhorrent “legitimate rape” comments haven’t sunk his lead on his U.S. Senate competition, incumbent Claire McCaskill.

I’m not here to argue, however, that for the sake of the St. Louis region’s soul, we need to defeat this man with a thunderous “nay” vote — though he certainly won’t have mine. The fact of the matter is that whether or not Akin secures a Senate spot, plenty of our neighbors share his views — or side with him more often than the centrist Democrat McCaskill. Even if the standard-bearer Akin drops out, or loses, those 68% of St. Louis County voters are still here.

By every account, America is becoming more divided. Not just between the loudly obvious, Tea Party vs. Occupy, (D) vs. (R) political sparring — but between a college educated and struggling workforce and between economic class. This division exhibits itself in more and more destructive ways — a recent NPR piece highlighted how charitable giving patterns are also fragmented across class lines, and that “rich people are more generous when they live among those who aren't so rich.” Political segregation has become increasingly documented in the last decade, leading to a world where “Republican places become more Republican and Democratic places become more Democratic.” Take this with recent tension and violence in places like Anaheim and Oakland, along with the economic crisis that sparked it all, and America’s divides threaten further, more corrosive discord in our immediate future.

We hear about a “divided Washington” on a daily basis, but D.C. — an industry town stuffed with recent collegegraduates — is a false distillation of where we stand. So, too, are the frequent New York (blue) and Texas (red) comparisons: these states may represent a different pole of political praxis, but they’re too far apart for real exchange and the debates ignore too much of each state’s grey matter.

Places like St. Louis — divided but contained, with substantial gains to be made through collaboration — are increasingly important, if not the central distillation of where we go as nation. Our challenge isn’t how to turn the County into a Democratic voting block, or how to erase City taxes and regulations to push toward a business development open range. The challenge of St. Louis is transforming bitter divisions and political stalemates into workable solutions for moving us forward. If we don’t, the consequences are obvious — and dire.

Such outcomes — like the recent failure of the no-brainer “China Hub” — have been well-documented elsewhere (see Tim Logan’s “The Cost of Fragmentation”). And while these consequences are more serious than ever, St. Louis has a historical precedent of division, from Civil War-era North/South/West conflicts to the establishment of an incredibly fragmented government. Resolving these collisions, even if a compromise resembles more of a ceasefire than a celebration, is critical for St. Louis’ economic, cultural, and civic growth.

Akin vs. McCaskill, like City vs. County and Missouri vs. Illinois, can yield no ultimate victors. While the national news cycle depends on fueling such divides, ours doesn’t have to. It may seem impossible to hold a dialogue with Akin acolytes, but these people aren’t some distant demagogues — they’re our neighbors. We have a common interest in supporting Forest Park, creating equal educational opportunities, and easing the economic disparities that foster crime — even if we agree on nothing else.

“As goes Missouri, so goes the nation, ”the saying once went, though the state as a whole may have inched into permanent red. St. Louis, I would argue, is a fitting replacement — one whose economic challenge is severe, whose political and social divide is widening, and whose future depends on uniting disparate interests toward collective progress.

As goes St. Louis, so goes the nation. It’s time we rose to the challenge.