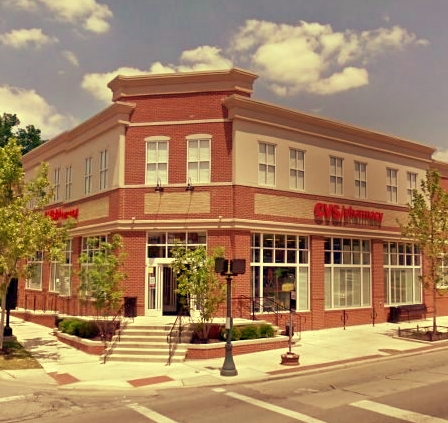 The ongoing saga of the proposed Lindell CVS store has laid bare a number of startling misconceptions on the part of both the elected leadership of St. Louis and, to a lesser extent, the engaged citizenship of the city.  St. Louis often takes its own struggles in isolation. Considering the proliferation of formula pharmacies, these local battles are part of a larger retail war that has been ongoing in cities for a decade such as Omaha (PDF), Cincinnati, and throughout the United States.

The challenge of formula retail, commonly known as chain retail, is exactly that it is formulaic. Clearly, architecture prototypes designed for exurban locations do not work efficiently in the urban context and erode the surrounding community. Any structure designed for infinite replication will fail to provide the sense of place that all neighborhoods need to thrive.  Efficiencies of scale are often perceived to demand models that sacrifice this local identity for a standardized product, however this is a significant misconception.

A common reaction to the CVS plan to demolish the AAA building for a new store location is that CVS will only build their prototype.  Developer Robert Antrim expressed such sentiment  at a zoning meeting on July 6th 2011 when he stated that CVS has “a prototype building that they like to build”. Let us be clear: what CVS likes to build is irrelevant. In Mr. Antrim’s suburban Indianapolis worldview, CVS would be very unhappy to locate in any of the following locations

What is relevant is the revenue potential of a given location. Both CVS and Walgreens rely on extensive market research to the extent that similar methodologies result in cocentrations in the same geographic locations. If a location has enough potential value, then CVS (or Walgreens) will adapt their prototype as necessary to locate there. A prime example can be found in the Webster Groves-esque suburb of Bexley outside Columbus, Ohio. Bexley became famous in the mid-1990’s for preferring an empty porn shop to a new McDonalds franchise. In the end it took over a decade for McDonalds to open a location. Cognizant of recent history and focused on the location, CVS worked under a stringent set of local planning guidelines to open a location at 2532 E. Main Street in 2006. 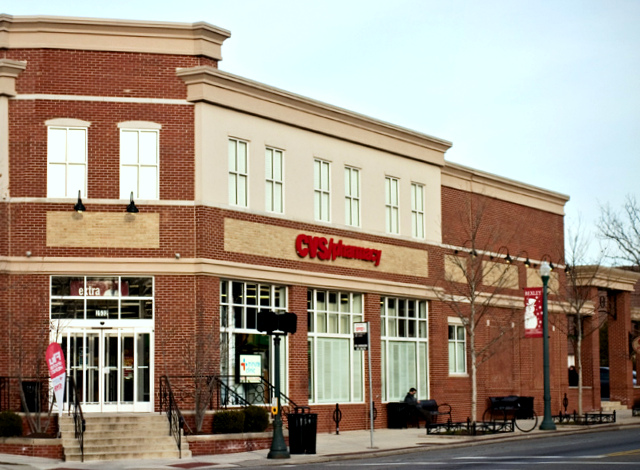 {CVS in  Bexley, a near suburb of Columbus, OH}

Although this location does include a drive-through, the store is massed to the street edge with unusually attractive screening between the small parking lot and the sidewalk. CVS was also persuaded to provide ample benches and bike racks by local government officials. 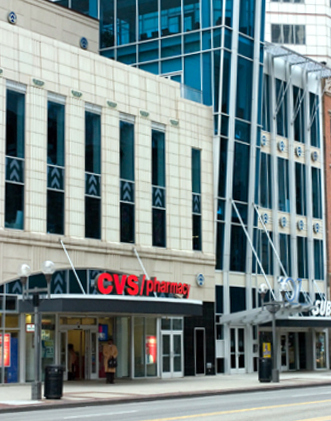 A few miles away from Bexley in downtown Columbus, and a stone’s throw from the state capitol, CVS chose tenancy in 2005 to reach a critical market location. The 43,000sf 3-4 story project, developed by Arshot Investments, combined a narrow new office building with a vacant Woolworth store.  This store is notable for its mix of uses and total lack of parking facilities.

While chain drug stores are generally more likely to inhabit new development than other types of formula retail, the combination of market potential, strong political oversight and strict conservation and zoning requirements does result in a strong urban location. CVS is not alone in capitulating to such forces. With 68 locations, including eight in a 1/3 mile radius downtown, Walgreens is to San Francisco as Starbucks is to Seattle.  With market dominance comes resistance, so when Walgreens wanted to open just up the street from Harvey Milk’s old camera shop on Castro Street, community pressure was intense. 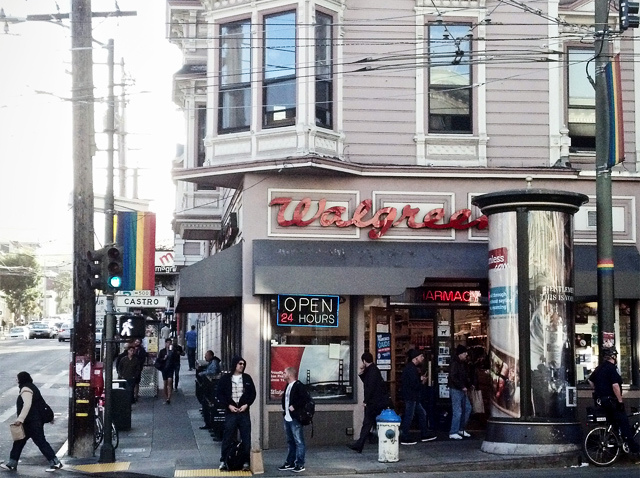 {CVS in The Castro, San Francisco}

The result is a Walgreens in a two-story mixed-use structure that dates to 1900. The available ground floor area is 25% smaller than a standard store, so Walgreens was forced to think creatively. In a move seen often in San Francisco, but never in St. Louis, Walgreens opted for a scattered site strategy and opened a separate pharmacy department 130 feet away at 4129 18th Street. While this strategy may seem objectionable, it is actually shorter distance than the walk between the existing  “urban Walgreens” and Lindell Boulevard.

Elsewhere in San Francisco, Walgreens has allowed itself to be molded by larger planning concerns. In this author’s own neighborhood, planning guidelines and market pressures have ignited a resurgence and gentrification of a strength never experienced in St. Louis. Over the past thirty years the majority of 159 gas and service stations have been demolished and turned into mixed-use developments of varying quality. Notably, development has been guided to transit corridors.  A block away from my residence, the intersection of Cesar Chavez and Mission is remarkably similar in scale and character to the intersection of South Kingshighway and Chippewa. Walgreens noted significant public transit ridership and sought to locate a store there, despite the presence of another store only six blocks away. In 2007 a 60 unit four story mixed use project was built on the site of a former paint store. 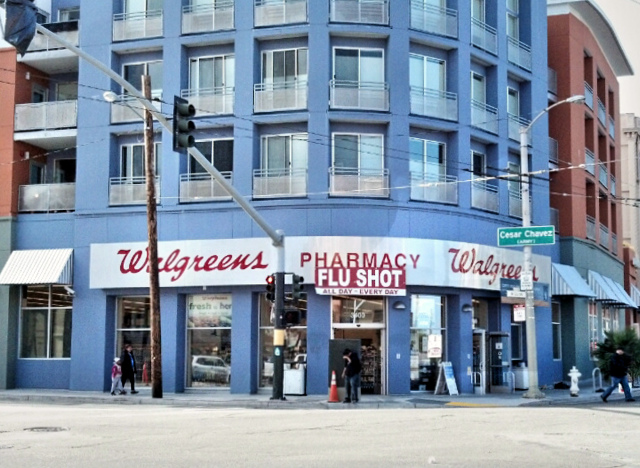 {CVS at the intersection of Cesar Chavez and Mission, San Francisco}

Obviously, pulling the building to the edge of a busy street corner in a dense development precludes a sea of surface parking. Walgreens wanted to be able to attract customers from the 101 freeway, so they negotiated shared customer parking in the garage of the residential development. 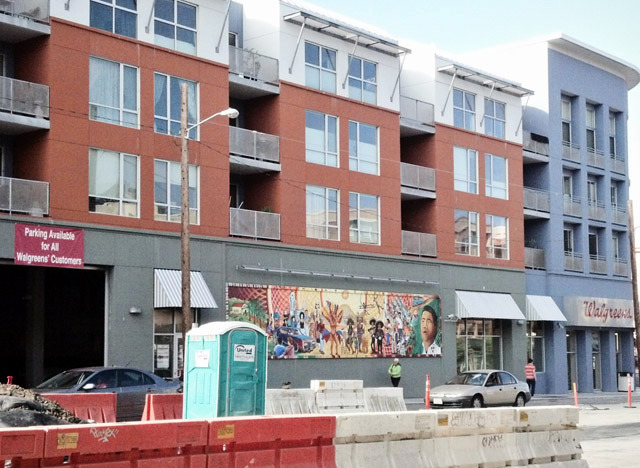 {the mixed use development at Cesar Chavez and Mission}

Shared parking is often used by Walgreen’s in similar locations. There is no reason it couldn’t happen at the St. Louis AAA site. The mixed-use development adjacent to AAA by HSA&D of Dallas has a parking garage that could be partially leased under such an agreement to free up space for more development. Conversely, a mixed use development with structured parking on the AAA site could add density and profit to the project while retaining the AAA building.

It is clear that comprehensive planning regulations, political will, and attractive market forces can and will conspire to create urban formula retail. However, in the past two decades St. Louis has not made much progress. If St. Louis can develop stronger, walkable neighborhoods it must address the formula retail; to do so requires changing the chronic lack of leadership capacity caused by fragmentation within the city and county and ending the politics of scarcity and desperation. As nextSTL Forum user rbeedee commented:

I'm sure [other cities] got urban and repurposed stores because [chains] were forced to by development guidelines. We won't do that here because of desperation for any kind of development and intra-city factionalism to complement the city-county factionalism. CVS wants to build somewhere in that area because they think they can make money. If they get to build their standard store, it saves them money so it's their preferred option. They couldn't get what they wanted in the 17th ward (which wasn't even preservation, it was pretty mild alterations to the standard format), so they moved across the street to a different ward with fewer (no?) demands. We need to have city-wide preservation review and more consistent development guidelines to avoid this undercutting. Worst case scenario here, CVS decides it's not worth the money to reuse an existing building or build to more rigorous standards and they don't open a store. Would that be so terrible?

Not to the neighborhood. Only to politicians seeking to conjure low-wage unsustainable jobs. This is why in St. Louis, Columbus, and elsewhere neighborhood sensitive formula retail examples are few and far between.
________________

There are quite a few existing CVS stores using existing non-standard retail space. While many are located in dense urban environments, the example in Columbus and the image below from Indianapolis show that the chain pharmacy will build what a community requires. -Alex, Editor 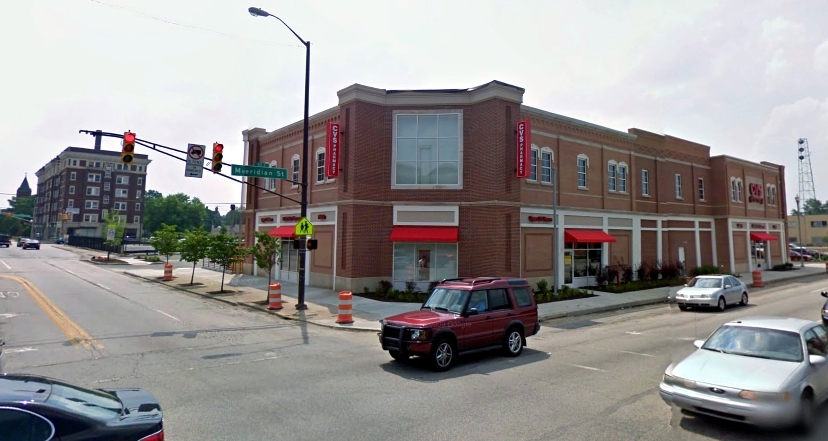 {CVS at Meridian and 16th Street in Indianapolis} 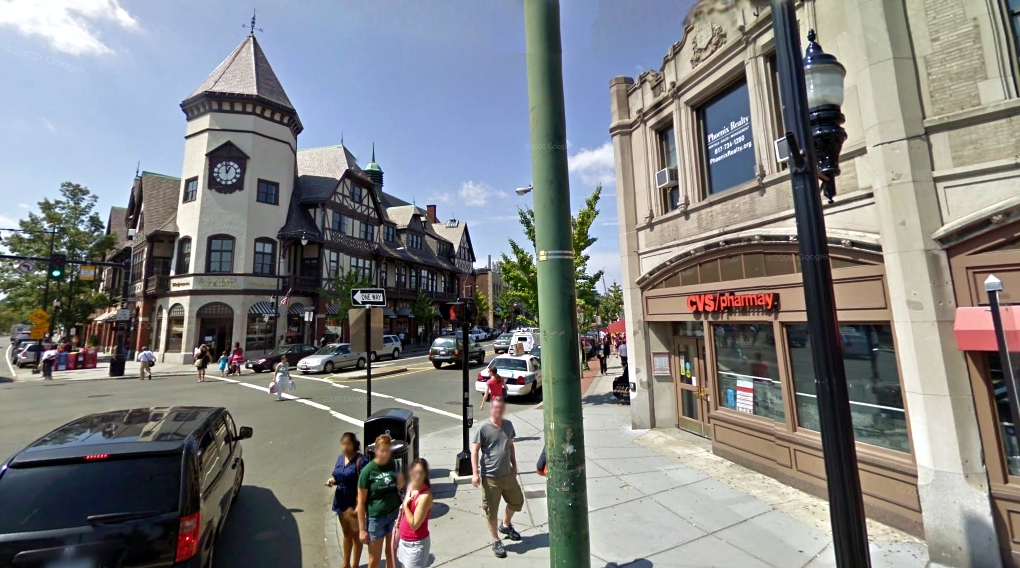 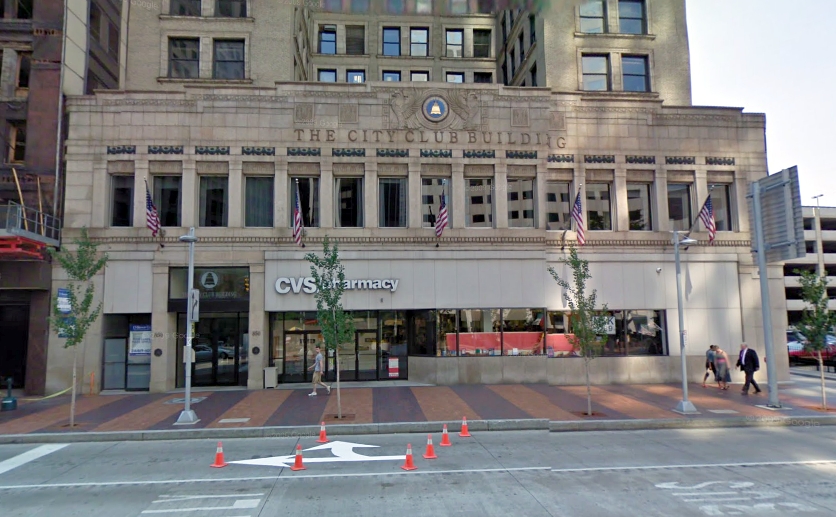 {CVS in the City Club Building in downtown Cleveland}