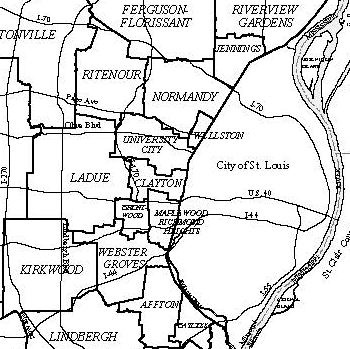 One of the benefits of more regional cooperation and consolidation is that assets and liabilities, problems and solutions become more ours and less theirs. We must recognize that we are interdependent and thus should support our assets and confront our liabilities in a coordinated manner. A prime example of our current state of affairs is highlighted by the contrast of how the St Louis and Kansas City regions have reacted to their most populous school district losing accreditation.

It has been no surprise; the problems in these districts have been evident for decades. Forces within and without have stymied reforms and efforts to confront the problems head-on. No doubt schools are the most incendiary sub-topic of the regional consolidation conversation, and the St. Louis Public Schools are the biggest liability for the City of St Louis as evidenced by the drop of school-aged residents in the latest census (17 and younger down 22,118 to 67,539 -24.7%).

Anecdotally my new neighbor, who lived in part of Richmond Heights that is in the School District of Clayton, told me of his great relief that his son could continue attending Clayton schools, otherwise he’d have to send him to private schools or not move into the city at all.

Hanging over all of this is the guarantee of a quality education for all in the Missouri Constitution and the Outstanding Schools Act of 1993, which included an accountability measure that allows students living in unaccredited districts to attend schools in the same or adjoining counties, tuition and transportation paid for by the unaccredited district and no right to refuse by the receiving district.

The Kansas City Public Schools lost its accreditation on January 1. The suburban school districts went to court to ask that students not immediately be allowed to transfer. They were denied. They recognized that a flood of students would overwhelm their facilities and the money bled from the KCPS would render it incapable of regaining accreditation. The suburban superintendents, some of whose districts cover part of Kansas City proper, worked out a plan to carve up the Kansas City district and absorb the pieces into the suburban districts.

“Cunningham said the Kansas City part of her plan was drawn up by the superintendents of the bordering districts in that area. She even named the Kansas City portion of her proposed law after the Independence district’s leader, Jim Hinson, who spearheaded it along with Bob Bartman, superintendent of the Center School District. Bartman is a former state commissioner of education.” (From the Post-Dispatch).

“Jim Hinson, the superintendent of the Independence School District, says he saw Kansas City lose accreditation this year and asked: ‘If I have students that literally live across the street that are not in our school district, but I know historically the lack of success, do we have an obligation to try to be part of a solution?’ He says the answer is yes.” (From KQED)

“I’ve been asking for two years: ‘Come up with your plan.’ And we haven’t gotten anything except, ‘Let us out of the law,’ Cunningham told the Post-Dispatch. Instead, in our hyper-fragmented region with 24 school districts in just St Louis County, the “keep them at arm’s length,” “that’s their problem” attitude prevails. When a city family tried to enroll their child in the School District of Clayton, the SDC and the SLPS ran to court. The ruling from the court (Turner v Clayton) was that the law is clear and to deal with it. More lawsuits are pending including one filed by St Louis firefighters who must reside in the city and want to enroll their children in accredited districts. Now the goal is for the state legislature to come to the rescue and pass a “Turner fix.”

What should the plan be for St Louis? Bus kids all over forever? Vouchers? Union-busting? Break the SLPS into smaller pieces? Vashon High School brought to you by Ladue Schools? One City/County school district? There isn’t one answer, but the educational professionals of the region should have the courage to come forward with one rather than looking to courts and the state to avoid the flood. We already have a regional educational organization, the Cooperating School Districts of Greater St Louis. They should step up to the plate. They’d rather protect their fiefdoms than stick their necks out to help children receive a quality education.

Greatly improving primary and secondary education is one of the most complicated and important challenges facing American society. Poorly educated children turn into unproductive resource-intensive adults who burden the social service system, fill prisons, and/or terrorize communities. The SLPS was once a world leader in education innovation; it is now Greater St Louis’ greatest liability. Some of our leaders know it. At a panel discussion at Washington University Brown School, Public Education at a Crossroads, Rep. Scott Dieckhaus from Franklin Co hit the nail on the head:

“The best solution to this entire situation is to try to find a way to educate children in their neighborhoods in their community, and looking long-term, I live 40 miles west of the city in Washington MO, but I’m still apart of the St Louis Metro area. Our success in Franklin Co is entirely dependent on the success in the St Louis metro area. We need people living in the city. We need people wanting to live in the city. We need to provide those quality educational choices and options in the city.”