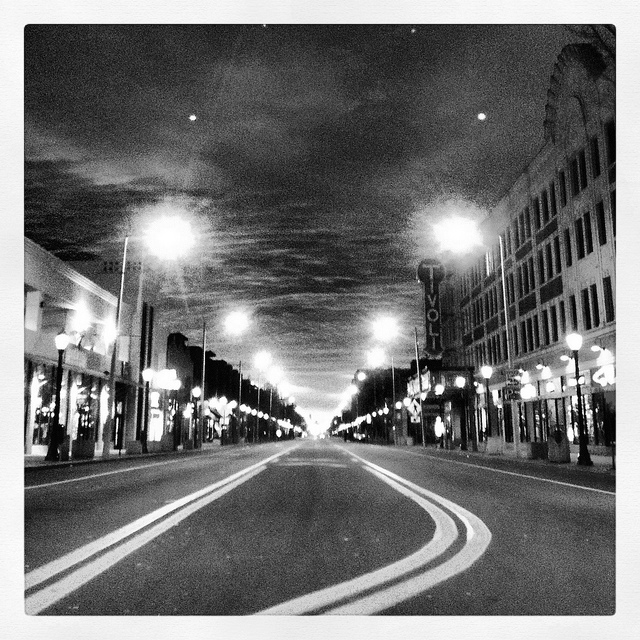 The Loop has always been one of my favorite neighborhoods in St. Louis. I love it as an example of revitalization without displacing low-income residents. I love that this revitalization was mostly effected from the ground up, by business owners in the area. I love the diversity of these businesses and their patrons. I love Chuck Berry at the Duck Room and Cicero’s BBQ pizza.

Because of this, I have been saddened by the recent news regarding the Loop. The storyline of “up to no good” teenagers causing problems is not a new one. I’d seen similar stories about the Galleria and the Country Club Plaza in Kansas City. However, the recent brawl and shootings seemed like something bigger. These events could (but shouldn’t) be the tipping point that causes suburban St. Louisans, and city residents alike, to think twice before coming to the Loop.

The implications of this could be pretty big. I think of the Loop as a “gateway” urban neighborhood. People go there to leave their cars, walk around, and interact with others from radically different walks of life. Still, it has huge parking lots, and most of it is not technically in the city of St. Louis. It is a great neighborhood for those who want to dip their toe into urban life. Those who come to appreciate it might be inclined to explore lesser-known St. Louis neighborhoods. If the perception of the Loop shifts and the average St. Louisan decides it is too dangerous to visit, I fear that the effects would be felt throughout the City of St. Louis.

A question posited on the St. Louis Reddit page asked, “What can be done about situations like the Loop?” The conversation is happening on the nextSTL Forum as well. Many of the responses were robust and challenging, and it got me thinking. What can the average engaged citizen do in response to situations like this, other than hope for the best? While I do not claim to have a definitive answer for this, I thought I’d offer a few suggestions.

Please don’t make this about race. Or, at least, please don’t make this about race so that you can make lazy assumptions and generalizations. None of the articles I have read mention anything about the race of the troublemakers. From the footage I’ve seen, the police are shooing off black teenagers, while the news reporters interviewed mostly white patrons about what happened. For some, this might feed into already-established prejudices. However, making this about race will only further exacerbate any issue. Idiots are idiots. Some of those idiots decided to start trouble on a Saturday night. Demonizing black youths or attempting to keep them out of the area would not only be wrong, but also ultimately damaging for the area.

I visited the Loop Friday night with a couple of friends. As we approached Skinker heading East on Delmar, the police presence was inescapable. I was glad to see it. Both the University City and St. Louis Police Departments were sending a clear message: this neighborhood means too much to let a few knuckleheads ruin it.

We—two white males and a white female—were waiting for the chance to cross Delmar along with two young black men. We crossed at the same time, both groups heading in the same direction, but we might as well have been in two different worlds. The environment became oddly tense and uncomfortable. When we reached our destination, my companions shared my impression: all of those police officers out there to protect the general populace definitely weren’t staring at us.

I was not exactly dressed to impress. Still, my ratty ball-cap, (wait for it) hoodie, and hand-me-down shirt probably registered somewhere between “Wash U. sociology major” and “harmless vagrant” on the stereotype spectrum. The black men walking with us, dressed in flat-brim hats and crisp button-downs, were clearly placed into a different category: “Threat, until proven otherwise.” They were not harassed, or singled out in any way, but the dynamic was still clear. We were all welcome to visit the Loop, but some were more welcome than others.

Much of the magic of the Loop lies in the diversity of the people there. The day that black youths no longer feel comfortable doing business in and enjoying the Loop will mark the beginning of the end of the area as we know it. It would also be a step backward in terms of racial relations in St. Louis. We live in an astoundingly segregated city, and the Loop is one of the few areas that is truly integrated. The area would probably be safer if it were patronized solely by middle-aged white people, but we already have a Plaza Frontenac that I feel no need to visit.

Please do make this about race if you want to truly examine the underlying racial components of urban poverty and crime. Please look at this within the context of the narrative of persistent alienation that exists for minority youths in American inner cities and causes them to identify with a culture counter to that of the mainstream.

Please don’t make this about the Loop. The fact that this symptom of deeper social ills manifested itself in the Loop should not be allowed to reflect on the Loop itself. The Loop’s success was a curse in this case—people, including idiots who start fights and shoot guns, want to be there because it is a great area. Sadly, had this exact same incident occurred in an area which middle and upper-class people do not frequent, it would have been a tiny blip on the radar.

Please do continue to visit the Loop. If you are truly concerned about the direction in which the area is heading, the best way to do something about it is to show up. Make your presence felt. Vote with your feet and your dollar. This is your area as much as anyone’s. Plus, I wasn’t kidding about that BBQ pizza. It’s awesome.

Please don’t try to make this issue going away by downplaying it. Sure, some people will use this opportunity to make dumb comments or reinforce their own prejudices. There’s not much you can do about that. This happened. It’s done. The best attitude going forward would be to use this as an opportunity to ask questions about why it happened and how something like it can be prevented in the future.

Please do believe that you can do something about it. It is easy to think of a city as a finished product, there for our consumption. One of the beautiful things about St. Louis is that it is anything but a finished product. It does not take too many committed and passionate people to make an impact—just look at City to River’s influence on the discussion regarding the Arch grounds. It’s easy to sit back and make potshot comments. Luckily, it’s also easy to be an active part of the solution.

Please don’t be satisfied with simplistic questions or easy answers. This issue is complex, and any solution that can be squeezed into a couple of sentences or an online comment probably won’t do it justice. The greater issues also won’t be solved anytime soon. That doesn’t mean we can’t start heading in the right direction.

Please do ask where those kids should go if we don’t want them in the Loop. Is there a viable third place where teenagers and young adults can gather in a safe environment? It sure seems like there is a long list of places where they can’t gather. If we truly want change, we have to think in terms of real solutions, rather than “not in my back yard”.

Please don’t give up on the Loop. Please don’t allow others to write it off. Please do fight for St. Louis. There’s too much at stake not to.