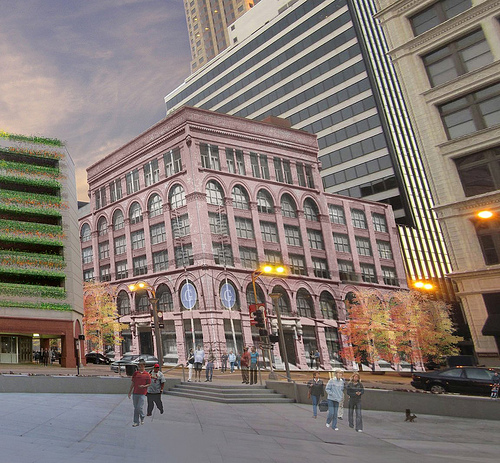 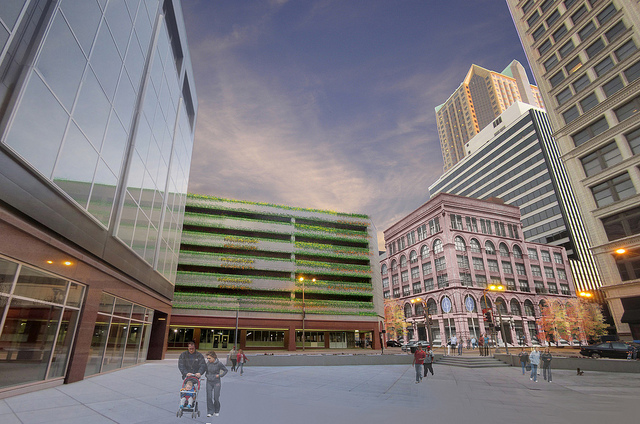 Arguably the brightest part of post-recession downtown St. Louis is the progress of the Mercantile Exchange: specifically the redevelopment of STL Center and the Laurel, and the demolition of the visually oppressive sky bridge that once connected them. The removal of the sky bridge alone was enough to make a huge impact on the entire Washington Avenue corridor (only one more obstruction to go). The addition of the Blues Hall of Fame, a movie theater, and Pi’s highly anticipated downtown location are all big steps forward as well. However, the ultimate key for the area will be continuing this momentum and spreading the progress throughout the CBD, to streets that don’t have the panache and vivacity of Wash Ave.

The Mercantile Library currently sits vacant on the rear corner of the freshly renovated STL Louis Center, immediately opposite the shiny new facade of the redevelopment that’s been dubbed St. Louis’ Time’s Square. This often-overlooked building is part of the Mercantile Exchange and is maintained by the same developers, but there are currently no plans for its renovation. Located one mere block from Metrolink and in the heart of the Central Business District (just one of numerous nodes within the broader ‘downtown’), the building is strategically positioned to feed off and therefore help further connect the various nodes of downtown. 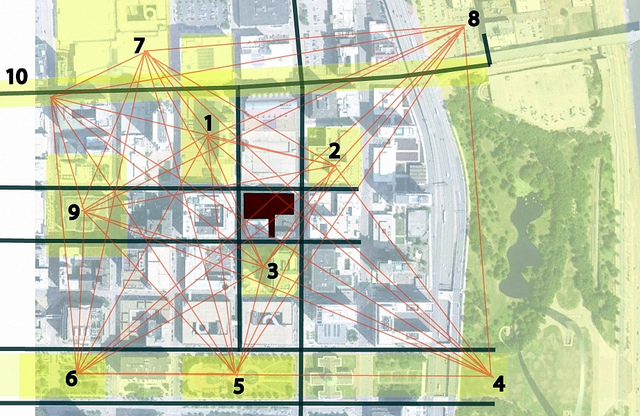 The destiny of this particular site is critical to continuing the recent progress of improving connections through increased pedestrian activity within and between the various nodes of downtown. Hopefully, there will be enough momentum from the initial Mercantile Exchange phase to allow renovating this structure as a mixed-use building. While the building in its present state is nothing noteworthy, the building wasn’t always so forgettable. 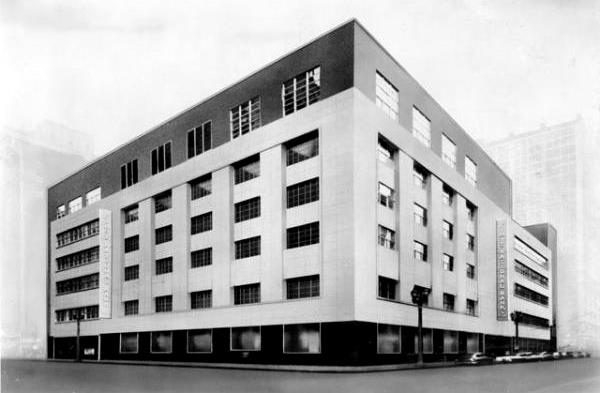 Before the building was unfortunately clad in the mid-20th century, the Mercantile Library was a magnificent brick structure with fine brick detailing and large windows, sitting strategically in the middle of the Central Business District. Although presently hidden, much of its character still exists underneath the current facade. 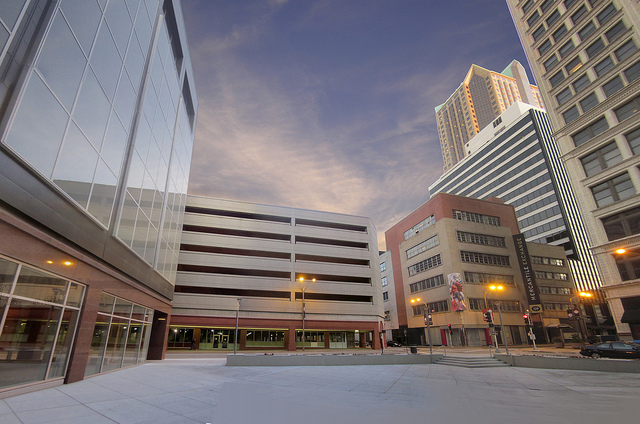 ^ Before: A disincentive for pedestrian activity, the parking garage (center left) is currently a bland and visually somber force on the area. The cladding of the Mercantile Library (center right) masks the grandeur of the original building without replacing its quality. The upper floors and large ground floor space are currently vacant, and the parking garage sits underutilized.

^ After: The Mercantile Library should ultimately be restored to its former glory and redeveloped as a mixed-use building within a vibrant section of downtown. The upper floors are ideal for light filled loft apartments, and a roof deck with Arch views would add to the appeal of the building. Downtown lacks a big box retailer, and the expansive space on the ground floor would be ideal for a single large retailer like Target. It would be located on Broadway, one of downtown’s most traveled corridors, and directly across from Macy’s, anchoring the MX to the south. Having a major retail anchor at this location will solidify the Mercantile Exchange as the premier retail section of downtown, and will send a positive message that downtown continues to become more livable.

The parking garage facade should receive a green wall that softens the feeling of the plaza, while adding nuance to the public space with new layers of color and natural textures. The modernity of the green wall and the new STL Center facade sharply contrasts the historic charm of the Railway Exchange (right) and the restored Mercantile Library. This juxtaposition attempts to bring out a certain dynamic energy that currently sits dormant within the plaza.

Let’s hope that the initial phase of the Mercantile Exchange is successful enough to truly spill over. The developer states: “the MX will link downtown’s most important residential, shopping and entertainment neighborhoods.” Let’s hope they can take the next step and make that statement undeniably true.