In a very short post on my Gateway Streets blog yesterday, I posed a very simple question. From just about anywhere in the St. Louis region, "will this bus take me to downtown St. Louis"? The answer, as I so emphatically illustrated below, is "NO!" For people unfamiliar with St. Louis's public transit system, that answer may seem confusing and incorrect. After all, a quick glance at the Metro system map shows many bus lines threading their way through downtown. 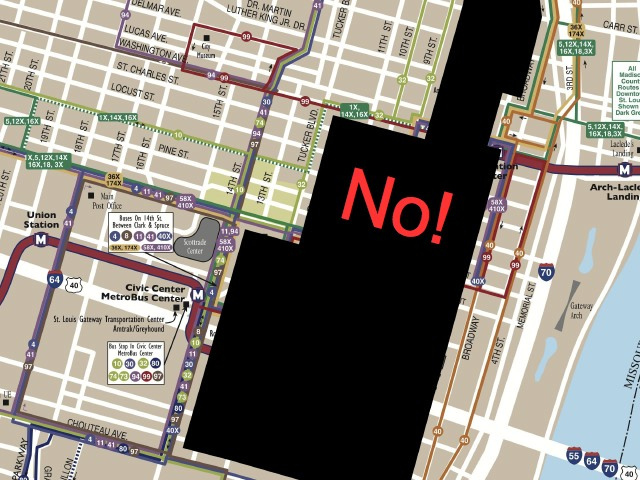 Regular bus riders, on the other hand, know just how misleading lines on a map can be. They know that any trip to downtown will inevitably mean a forced transfer at the Civic Center Transfer Center. They know that local buses east of 14th St are virtually nonexistent. They know that the only buses that traverse the heart of downtown are express buses that operate only at peak times in the peak direction.

To illustrate the problem, compare the two maps of downtown St. Louis below. The first map is the current Metro system map. The second map has been modified to show only the local bus routes: MetroLink, MCT buses, express buses, and the 99 Downtown Trolley have all been removed. The second map shows what the bus system looks like to bus riders most of the time. 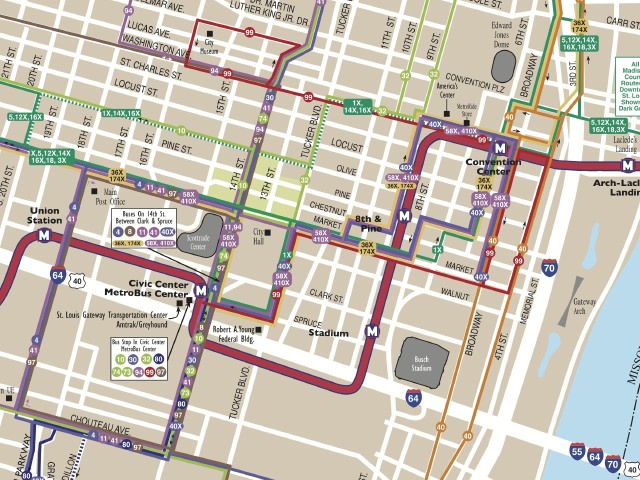 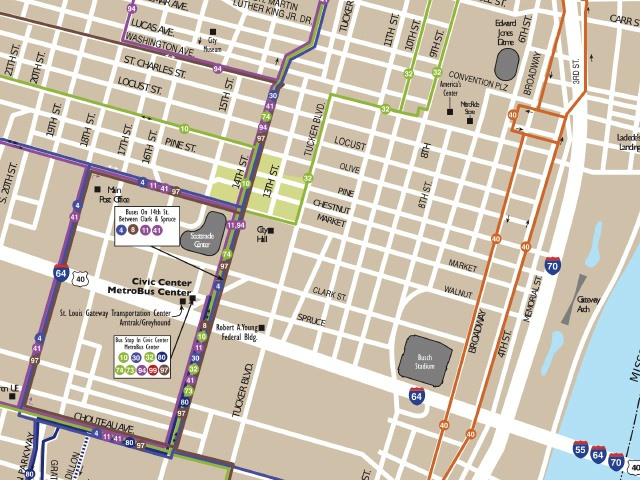 Can you see any notable gaps in the Metro bus system?

The importance Metro has applied to the Civic Center Transfer Center explains the sheer lack of bus service downtown. Given that most of Metro's bus routes operate at 20-minute headways or worse, the transfer center allows Metro to operate its buses on a pulse schedule. A pulse schedule is where a group of buses arrive at the transfer center generally at the same time, wait to allow riders to change buses or connect with MetroLink, then depart. Servicing this pulse forces and encourages Metro to divert buses around downtown to reach the transfer center's 14th St location.

While the pulsing of the Civic Center Transfer Center enables Metro to create a more efficient bus system, this does not excuse Metro from not properly servicing downtown. In fact, by "fencing" buses west of 14th St and forcing people to connect to another bus or train, Metro is sending a signal to bus riders that they are second class citizens of the Metro transit system. 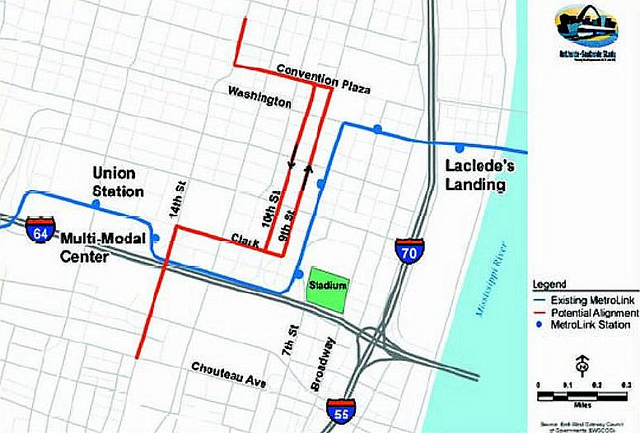 How so? Contrast the routing of local buses down 14th St with the proposed Northside-Southside MetroLink alignment. The Northside-Southside alignment travels along 14th St both north of Delmar Blvd and south of Clark St. But between those two streets, the proposed routing takes pains to shift east to 9th and 10th streets to travel through downtown. Why is MetroLink getting routed through downtown while buses are stuck on the periphery?

Comparing Metro's lack of bus service downtown to other cities only further drives home the point. Not one other major US city, not one, has such little bus service to its downtown core as St. Louis. Only Boston comes close, but Boston has the advantage of having multiple rapid transit lines radiating in all directions out of downtown.

Downtown is the largest center of jobs in the St. Louis region. Thousands of people now live there, too. Downtown is where the people are, it where the people want to go. Not every bus needs to go downtown, but Metro could make a lot of regular bus riders happier by giving downtown the bus service it deserves. A small circulator is not enough.