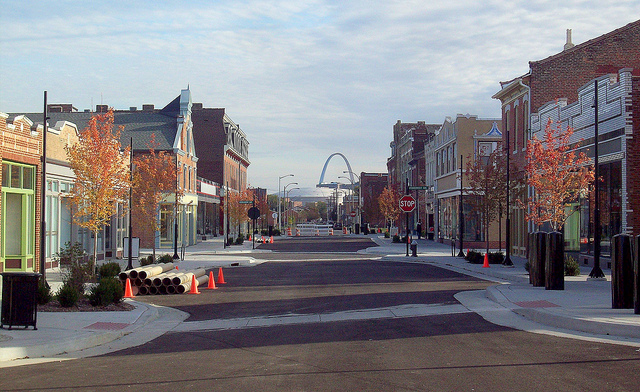 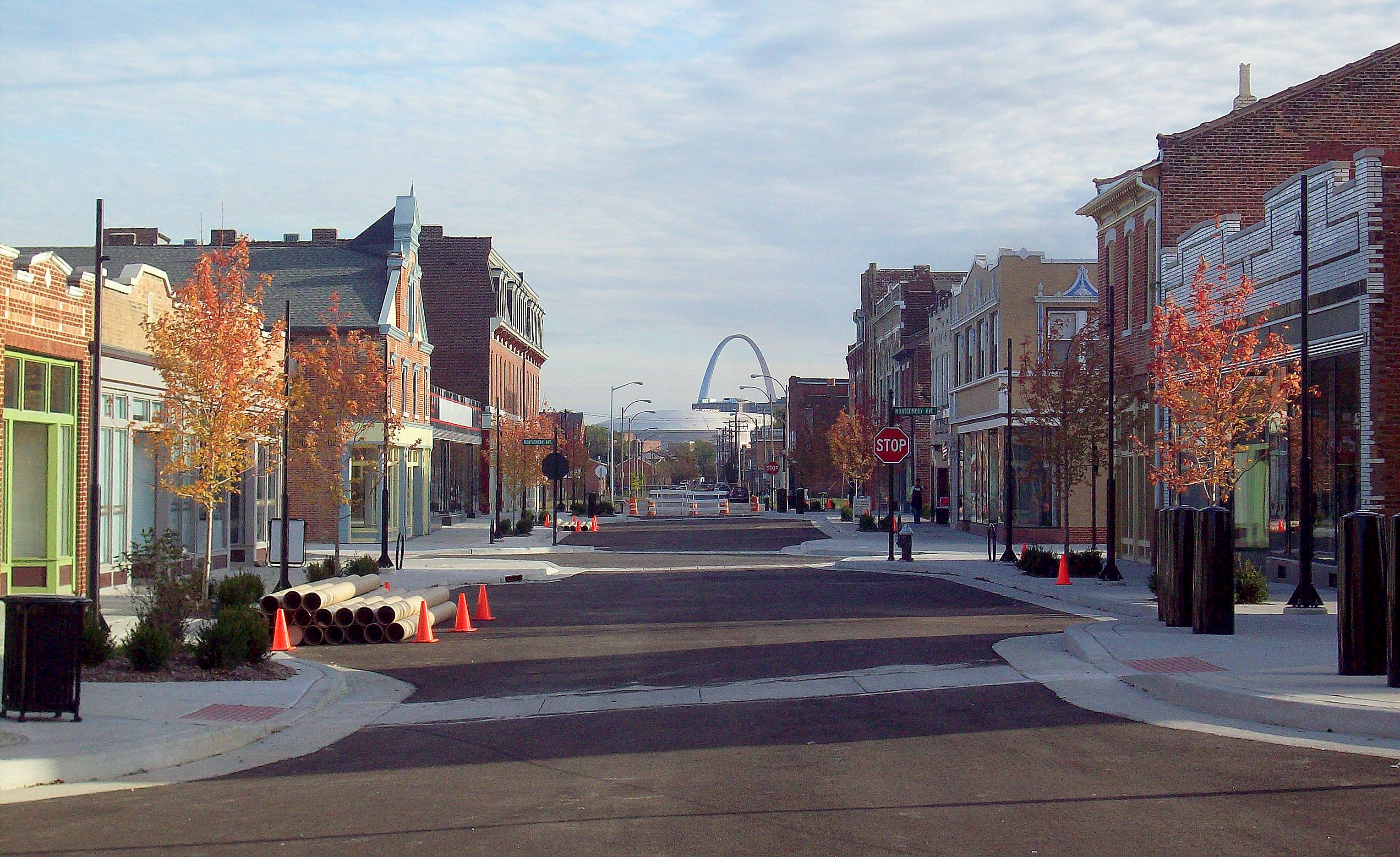 While St. Louis has always been near and dear to my heart, I have been something of a prodigal son to this fair town. After growing up in University City, I went to Boston for college (if I leave it that vague, it sounds like maybe I went to Harvard). Upon graduation I moved to Kansas City because, well, that’s where I got a job.

Although I think Boston is a world-class city, and I have quickly grown to love KC, St. Louis has always been Home with a capital “H” for me. When I finished teaching this year and people asked how I was spending my summer, I didn’t say I was going to live at my mom’s house. I simply said, “I’m going home.”

Home and I had a little catching up to do. My passions for this city and for urban environments in general had blossomed since I’d been away, but they lacked the concrete grounding of daily experience. So, before I had even started unpacking my bags, I took off on my bike for a re-acquaintance tour with the city. I cruised down Lindell, passed SLU, did a quick loop of downtown, explored City Garden for the first time (sue me), and then headed North.

I feel like the North Side has taken on mythical status for many St. Louisans. While it has a very large number of very real problems, it has also become an easy repository for all that is wrong with this city. It is what inflates our crime statistics. It is where the bad schools and the vacant buildings are. It is what we have to deal with in order to go to Crown Candy, windows up, doors locked. The North Side? Don’t go there.

So I went, pedaling slowly at this point, wishing I had eaten a smaller breakfast. I meandered through Old North, and down the beautiful (but very quiet) 14th Street Mall/Crown Square. I continued on through Hyde Park, up to the water towers on College Hill. Passing by Fairgrounds Park I was treated to a fantastic mid-morning roller disco show. At the risk of meandering, riding through the North Side was… nice. I didn’t feel unsafe or threatened, and I took in some beautiful sights. This was not the bogeyman of an area that I kept hearing about through the media and local lore. 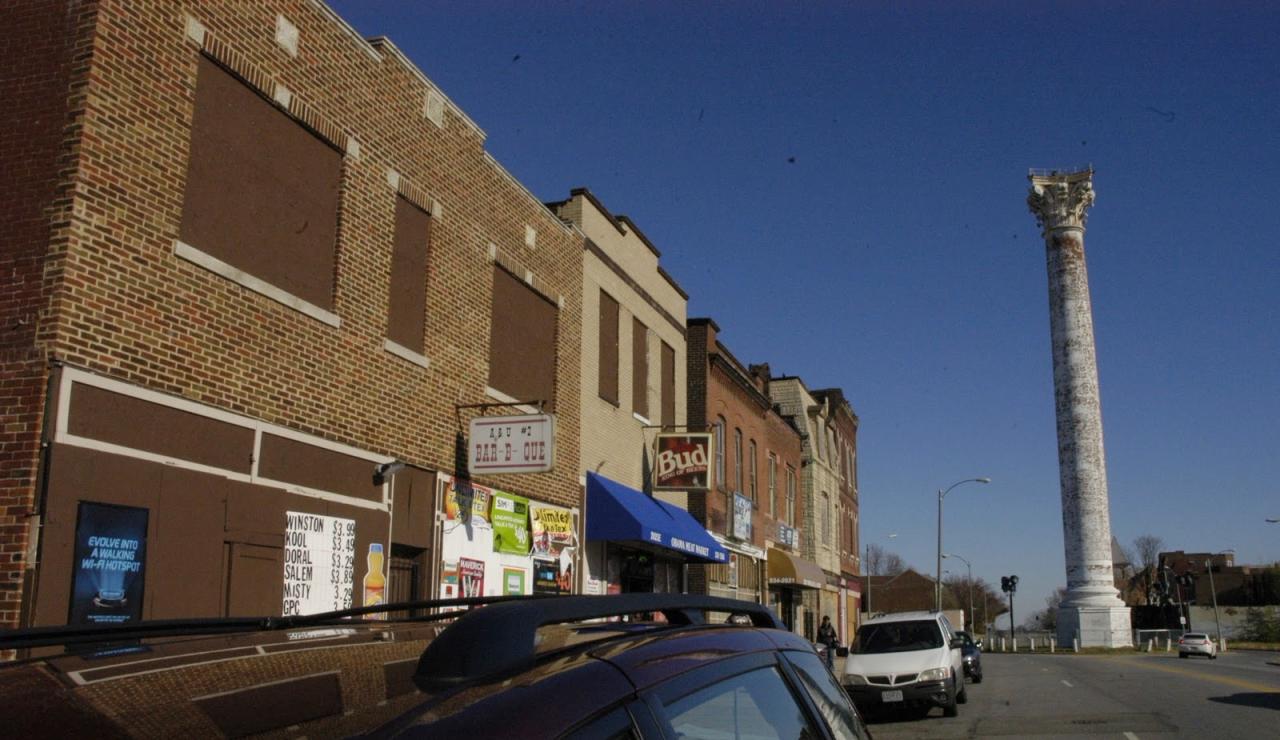 {shops and the old water tower in the College Hill neighborhood in North St. Louis}

Mild appreciation was not the reaction I expected to have. Although in many ways the North Side catches a bad rap, the statistics don’t lie: only 30.4% of residents 25 and older have a high school diploma, and only 63.9% of children ages 5-14 are even enrolled in a school (McEagle Properties’ Northside Regeneration website). In many ways, this is not an area that is down on its luck; it’s a disaster. If this is the reality beneath the peaceful surface I saw, then where was my indignation? Why wasn’t I fuming with righteous anger? I am not trying to universalize my experience, or claim that everyone feels the same way I do, but I doubt that I am the only one who has felt somewhat ambivalent about the area. If not, I think there would be a whole lot more people raising hell about the North Side’s condition.

I propose that this dulling of my feelings about the North Side has several causes. First, I think media portrayal is the primary factor in influencing people’s perspectives of the area, more so than firsthand experience.  If one based their opinion solely on mainstream news reports, they wouldn’t head North without a flak jacket and a police escort. In the context of these portrayals, the actual North Side takes on a feeling of benign blight, or tame chaos. When you expect the worst, finding something that is merely very bad is almost a relief.

However, I think there is a deeper reason for why I wasn’t as upset by the state of the North Side: I had forgotten that it didn’t have to be this way. St. Louisans are so used to failure, crime, and blight on the North Side that even band-aid solutions are taken as a step forward. This way of thinking is not only wrong, it’s dangerous. 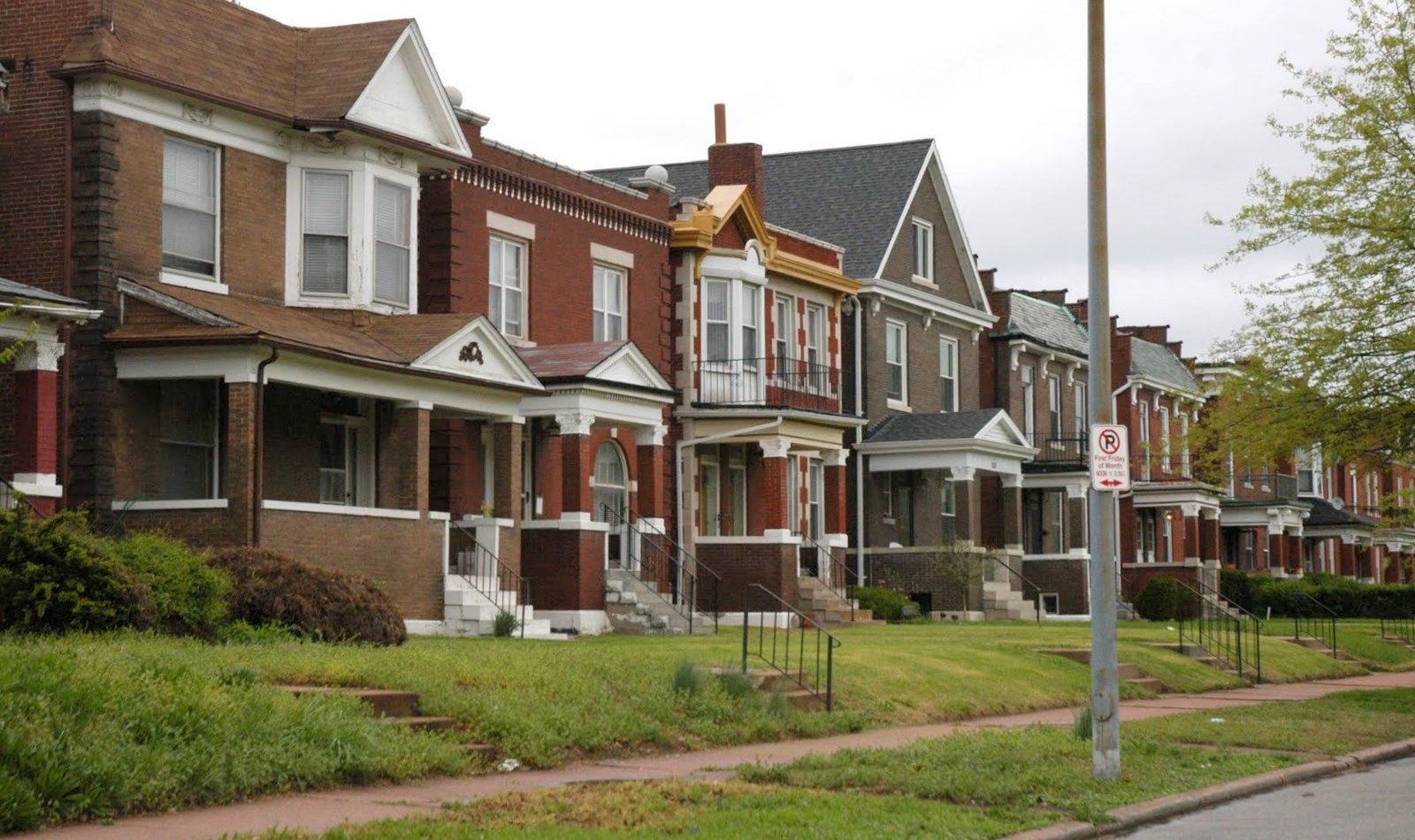 {an ordinary street in the O'Fallon neighborhood in North St. Louis}

True, the North Side will be a low-income area for the foreseeable future. I view this as a good thing. Low-income residents need a place to live from which they can access the resources of downtown. Any rapid increase in median income would be the result of gentrification and displacement, not empowerment and development. In order to see a better future for the North Side, one must break out of the “Poor area=Bad area” paradigm. A poor area is an area in which people who don’t make much money live. A bad area is an area with some combination of negative features like high crime, poor infrastructure, few economic opportunities, and low social capital, to name a few. Just because poor areas and bad areas are so often one in the same does not mean they have to be. 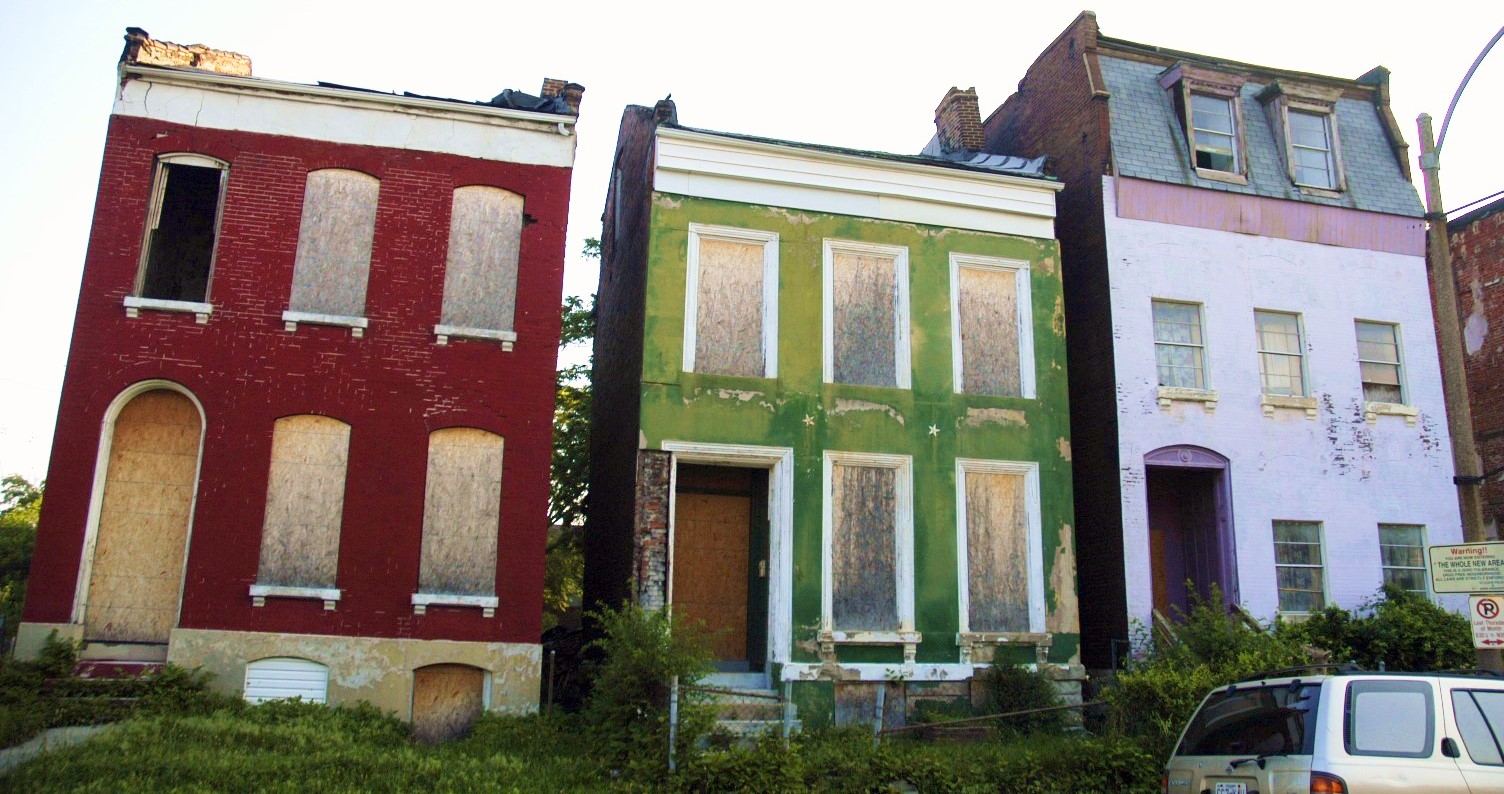 {a scene in the JeffVanderLou neighborhood in North St. Louis}

As a reference, I’d like to quickly point out the Dudley Street neighborhood in the Roxbury area of Boston. This area is often referenced as an example of successful community development, and rightfully so. In the 60s, 70s, and 80s, the Dudley Street area faced many of the same problems as our own North Side. Vacancies were high, and arson was extremely prevalent as owners burned down buildings in an effort to collect insurance money.

The future seemed to be one of either complete collapse into blight, or one of possible “salvation” by way of the gentrification that was advancing from the neighboring South End. Instead, community members and concerned institutions rallied to turn the area around. They did this while putting a priority on ensuring that current community residents would be able to afford to stay. Today, Dudley Street is a diverse, vibrant, and low-income part of Boston. It’s not perfect by any means, but it is a successful community that meets the needs of its residents.

I bring this up not because I think we should follow the blueprint that worked in Boston (although there is a lot to be learned from what they did). Learning from success stories is great, but our St. Louis problems will require St. Louis solutions. I bring it up because there is no reason that the North Side can’t be in the near future what Dudley Street is today. This may seem like an obvious statement to some readers, but I think it’s incredibly important. When we focus too much on what the North Side is or what it was, we forget what it could be.

Yes, it will take many small steps to get there, but we need to be very conscious of, and hopeful for, where those steps are going. The North Side of St. Louis won’t be Dudley Street, nor should it be. It won’t be Tower Grove or Soulard, nor should it be. It can and will be a unique urban environment that serves both those who live there and the greater St. Louis community. Let’s not forget that. The sooner we re-frame how we look at the North Side, the sooner real change will begin.