In the post I wrote last week comparing the Grand and Central West End MetroLink stations, I concluded with a question: "Would additional stations or even a different alignment have better served the neighborhoods MetroLink passes?"

As the map at the top shows, I believe that a MetroLink alignment along Market St and Forest Park Ave would more effectively served the city's central corridor, the city's spine, than the existing alignment. The wide right-of-ways and long intersection spacings of both Forest Park Ave and Market St could easily accommodate MetroLink at-grade without significantly slowing the line's speed down. In a way, it's a shame St. Louis didn't have any money of it's own to invest in bettering MetroLink's route when it was built. But, then again, who can resist free [right-of-way]? 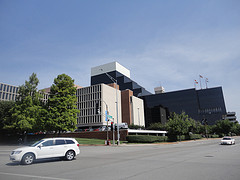 Speaking of Grand, relocating the station north to Forest Park Ave would bring MetroLink 1/4-mile closer and within very easy walking distance to SLU making MetroLink a significantly more attractive option to the university's students and faculty. The entire main campus, in fact, would be within a 1/2-mile radius of the station as would be parts of Grand Center. Additionally, bringing the station out of the valley is much more likely to encourage transit oriented development than the existing station site.

Splitting the difference between the Grand and Central West End stations is a station at Sarah. This station would serve the growing CORTEX district as well as the small neighborhood commercial strip to the north. 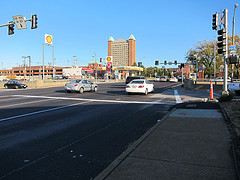 Interestingly, there have been multiple proposals for a MetroLink station at or in the vicinity of Sarah St in the past. Back in 1997, when debates centered on whether the Cross County Extension should be routed north or south of Forest Park, the south-of-the-park route would have included a station at Boyle Ave before diverging from the main line. More recently, the 2003 Midtown Strategic Development Plan proposed a station at Sarah to serve the then called Technopolis business park:

Technopolis is located between two MetroLink stations – one at Euclid Ave. and one at Grand Blvd. – that are approximately 1.5 miles apart. The Midtown Plan recommends adding a new station at Sarah St., midway between the existing two stations, to directly serve Technopolis. A new, conveniently located station should add to the area's attractiveness to new businesses and employees. Also, this station, especially if developed with a park and ride facility, could add to the attractiveness as of Midtown as a residential area with easy access to downtown and other employment centers served by MetroLink. 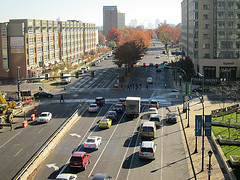 Interstate 64 is often called St. Louis's spine as it runs the length of the region's favored quarter from downtown to Chesterfield. While this may be true west of Clayton, east of the innerbelt, it is not I-64 that serves as St. Louis's spine, but rather a combination of Forest Park Ave/Market St or Lindell Blvd/Olive St. Those are the streets on which the city lives and breathes, not the highway. For that reason, it would make sense that MetroLink's spine aligned with the city's. The result would be greater intracity connectivity and an additional transportation option connecting the places we already go.