{Europe and the US offer vastly different challenges to building HSR}

When discussing high-speed rail (HSR) we should first answer this question: how fast does it need to go to call it HSR? In the US, a speed of 110 MPH has been designated HSR whereas in Europe 156 MPH is used as a benchmark. This is called HSR-Express in USDOT lingo. When we look back at the golden age of steam engine-powered locomotives we will find that trains in the 1940’s already traveled at speeds of 110 MPH and even faster. Achieving these speeds again today, feels like a “Back to the Future” moment.

Why not be a little more ambitious and use the standard of 156 MPH as a minimum for high-speed rail? Trains that fast have been operated successfully in Europe since the early 80’s and presently the majority of European high-speed trains travel at speeds in excess of 187 MPH.

How similar, or disimliar is a potential St. Louis to Chicago line to the Thalys route between Amsterdam and Paris? The STL-CHI line is 284 miles, while the AMS-PRS line reaches 305 miles. It takes the Thalys train about 3 hours to travel from Amsterdam Central Station to Paris Gare du Nord. Although reaching a speed of 187 MPH, the train slows regularly and stops in Rotterdam, Antwerp and Brussels. 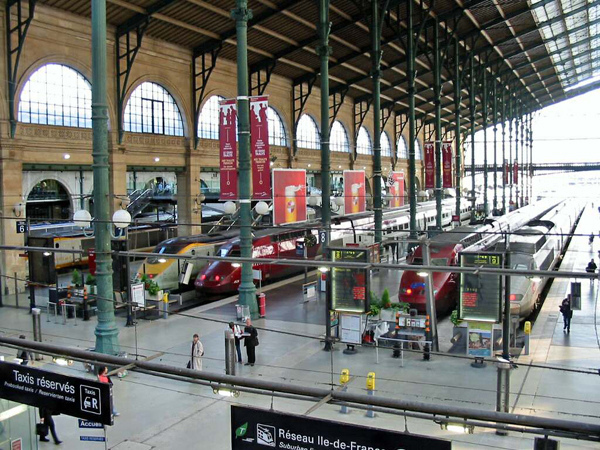 {the Gare du Nord railway station, one of the busiest in the world}

The cost? In 1989 the Dutch government decided to build a dedicated high speed rail line from Amsterdam to the Belgian border. The project eventually began in 2000. The total length of the line between Amsterdam and Belgium is just 78 miles, of which 53 miles is completely new rail. The 53-mile high speed segment was finished in 2009 at a total cost of 6.7 billion Euros (8.7 billion US dollars). The astronomical cost of the track can be partially explained by the fact that it had to cross several wide rivers and a very long tunnel needed to be built for environmental reasons.

MHSRA proposes to build a dedicated track between St. Louis and Chicago suitable for speeds up to 220 MPH, reducing the travel time between the cities to one hour and fifty-two minutes. A one-way fare would be $46.00. At a later stage the track would be extended to O’Hare which would take another 25 minutes and $10 one-way. This new dedicated track would be routed: CHI-Champaign-Springfield-STL with stops in all cities. St. Louis to Springfield would take 0:37, to Champaign 1:09 and to Chicago 1:52.

$12.7 billion dollars for a Chicago- St. Louis line is a lot of money but it really pales in comparison to some other proposals for HSR. In the northeast corridor a DC-Boston line is estimated at $200+ billion dollars with a new Hudson River tunnel between New Jersey and Manhattan projected at over 13 billion dollars alone.

Vice-President Biden last week announced a proposal to dedicate $53 billion over the next six years (which includes the $8 billion from last year’s program) with a goal to connect 80% of Americans through high-speed rail within 25 years. This money will be spent on three programs, Core-Express: dedicated tracks suited for 125-250 MPH, Regional: 90-125 MPH and Emerging: up to 90 MPH.

Let’s go back to Europe one more time to see why they’ve been successful operating high-speed trains over the last 30 years. Europe is very densely populated with 450 million people living in an area half the size of the United States. The population served by the Amsterdam-Paris line is roughly 7 million in the Amsterdam-Rotterdam area, about 5 million in the Brussels-Antwerp area and about 12 million in the Greater Paris area for a total of 24 million. Draw a 300 mile radius around any of the cities mentioned above and you will find 140 million people living within that circle.

High speed rail operations in Europe are run by private companies that have to make money and are not subsidized*. Air France and KLM participate in Thalys, most of their customers connect by train between their hub cities and as a result air travel between Amsterdam, Brussels and Paris has been virtually eliminated. (*Large national railway operators like SNCF, DB and NS are still more or less state-owned but operate like private companies. They are all in the process of being further privatized.)

This model of short-to-medium range distances in high density areas is the key to profitable HSR operations and this is the biggest challenge for high speed rail in America: much longer distances and much lower density. It’s one thing to build it. It’s a whole different thing to operate it profitably. 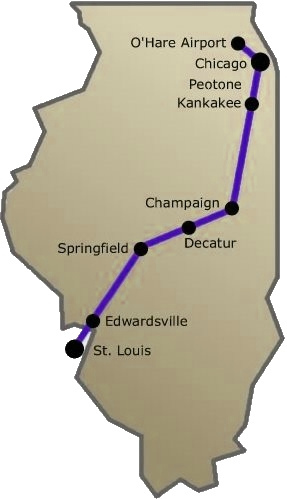 The 284 miles that separate St. Louis and Chicago make it expensive to build, to compete with air travel you would have to be able to go city to city in under 3 hours and do so at a certain frequency. For instance, two trains a day would defeat the purpose of going fast. People want to go when they want to go, not when the train wants to go. Simultaneously, at a higher frequency the trains will still need to be filled to keep it profitable. (Note: There are about 30 daily flights to choose from to O’Hare and Midway from STL.)

Even with a dedicated track, a train between Chicago and St. Louis would only be able to travel at 220 MPH on certain segments. It seems more viable for future HSR between the cities to use lower (but still high) speeds of up to 187 MPH. It’s cheaper to build, cheaper to operate and the time savings between 187 and 220 MPH are just too small (less than 10 minutes) to make a large impact. Passengers would still be able to get from downtown St. Louis to downtown Chicago in a little more two hours, a competitive length of time.

It’s worth mentioning as well that a train running at 220 MPH consumes four times the energy of a train at 110 MPH. Assuming it will take about half the time to get to the destination it will thus use twice the energy consumed by the slower train. High-speed rail is not necessarily green, although it still beats out the airplane by a large margin.

Nationwide, many existing rail lines will likely be upgraded to 110 MPH in the next 25 years. High speed trains on dedicated HSR tracks will appear only in a few densely populated corridors. Whether a St. Louis-Chicago line would be included remains to be seen. To think that one day 220 MPH trains will be crossing the continent from North to South and East to West is simply a pipe dream. It’s too expensive to build and impossible to run profitably.

That’s where the airlines come in. Better hang on to that mini-toothpaste.