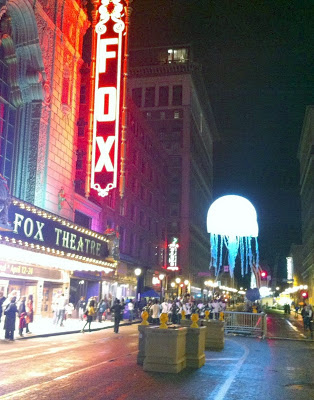 For the longest time now, Grand Center has been focusing on concentrating activities within its vague boundaries to the disadvantage of the rest of the community. This is true of the efforts to stop the renovation of the Kiel downtown, and of the poaching of programs from the rest of the region, like the relocating of KWMU and KDHX. This is not dissimilar to Jane Jacobs' complaints about Carnaegie Hall shuttering in the name of Lincoln Center. A concentration around the center leaves the rest of the city dry. If that concentration is then too isolated, then it too will dry up. I do not want to see the region's art community concentrated and then bled, and I assume Grand Center doesn't want that either. Hence, this post.

I enjoyed this year's First Night celebration in Grand Center, but there was one nagging thing that bothered me the entire evening.

Transportation for First Night was not planned smartly. In fact, it was planned with an obvious bias against buses. Grand Center is pretty much the middle of the city of St. Louis. It's at the intersection of Grand and Lindell, or more specifically the 70 Grand and 10 Lindell buses. The 10 connects our two CBDs in Clayton and downtown. The 70 is the best bus line in the system, runs the length of the city, and has been picked in Metro's long-range plans as the backbone of our future bus rapid transit system.

SLU's shuttles are the biggest poison in the system at the moment. Every day, the 70 Grand goes up and down the street picking up regular people, and the SLU shuttles shadow it picking up students and excluding regular people. If SLU ditched the shuttle, gave its budget money to Metro, and gave passes to its students, the Grand bus would see increased ridership, better buses, and better frequency.

Just as SLU makes this mistake on a daily basis, Grand Center did it in a big way on New Year's Eve. First Night shut down Grand Blvd and rerouted the 70 Grand bus around Grand Center. Metro did not post anything about this in advance. Instead Metro ran extra trains to Grand MetroLink station where a shuttle waited at the bus stop to take people along the 70 Grand's route to Grand Center. Services were duplicated, and quality was sacrificed.

For the sake of the event, the most reliable bus in town disappeared and a shuttle replaced it.

Our night went like this. We took the MetroLink as we were told, found no shuttle waiting, and simply walked. At the end of the night we needed to get home to South City and waited with a half dozen others at the bus stop for the 70 Grand to take us home. It never came. Obviously it didn't get the extra service that the MetroLink got. Three of us at the bus stop split a taxi to get home. I guess the others found their own means.

Grand shouldn't be blocked off, and the bus should be allowed to take people right into the center of the event along its normal route. Three of the main venues this year (Xavier, Scottish Rite, and the Busch Student Center) were on unblocked streets and worked just fine. If an outdoor block party is still desired, there's a huge parking lot framed by the Contemporary Art Museum, the Shelden, and the Grandel Theater that could hold a crowd much better than comparatively narrow Grand Blvd. Block Washington Avenue, it's smaller and has no buses. Closing Grand ruined the holiday for lots of drivers. I saw them making illegal lefts with the cops screaming at them.

Don't run shuttles. Run extra buses. Moreover, take ownership of the Grand bus. Make people see the Grand bus as an extension of Grand Center. Every inch of every bus should have been covered in First Night advertisements throughout the month of December. It goes the whole length of the city! People could see it and say, "That's the bus I'm taking to Grand Center for First Night." Logistics solved!

On New Year's Day, the shuttles are gone, but the bus remains. Teaching people to transfer to a temporary shuttle taught them nothing about the city. Teaching them to ride the bus connects them to something we're all a part of. Run some extra trains to get the east-west people, but run extra buses too for us north-south types.

Most important of all, let's let First Night expand out of Grand Center and let 70 Grand be the vehicle of that expansion. Add in the bars on South Grand. Add tours of Compton Water Tower. Put outdoor stages in Fairgrounds Park, Tower Grove Park, and Carondelet Park. Shoot fireworks from every other block along the entire bus route and let the whole city see it.

St. Louis is a city of house parties. That's what everyone did over the holiday. I've got my First Night button, but most people I've talked to have never heard of First Night despite its twenty years in St. Louis. It's an isolated block party in a city of isolated house parties.

At the beginning of the new year, we should push ourselves to step out and see new things, not stay home and spend the first day of the year recovering from a hangover. As it is, First Night is an exploration of venues not usually entered. One must look at the list of peformances and the map, and find venues perhaps unfamiliar. Yet even these are confined to the relatively small and safe Grand Center.

ArtPrize up in Grand Rapids is a scavenger hunt for art that covers the town in art and sends people looking for it based on rumors and advice from friends. They hunt down obscure oddities in parts of town they usually never frequent.

{a sculpture from ArtPrize in Grand Rapids, MI}

When ArtPrize is over, random pieces of art are left hanging around Grand Rapids, like this bunny in St. Louis from a previous First Night.

{a sculpture from a previous First Night in St. Louis}

Why not increase the frenzy of exploration at our First Night? Why not send people hunting for venues along the entire length of Grand? Why not leave a legacy of art, effective transportation, and better linked communities?

Let's celebrate the city as a city with city things: buses, sidewalks, and accessible streets. Big events like First Night should be a shot in the arm for the city and for Metro, not a punch in the face.