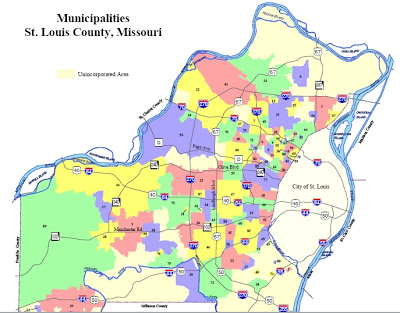 While the city/county merger/reunification debate opens up again, and even as a strong supporter of some type of consolidation, I would like to  put forward four ideas to make our region stronger without any type of merger.

Opponents say a potential merger is both politically and economically unfeasible and would not solve all of our problems. Proponents argue that remaining divided prevents us from moving forward. Another way to look at this topic is to pull out some of the issues that would be involved. So here are four ideas about this issue and the problems facing our region.

Metropolitan Emergency Siren Standards
In the city/county merger debate, many proponents frequently mention the numerous police and fire districts; however, what is not mentioned as much is the emergency siren standards. Last May, Fox 2 News featured a story on the difference in standards between siren systems across the region. Some counties such as St. Charles County and St. Louis County use an adjoining-county siren system, meaning that if an adjoining county sounds their sirens, then St. Louis County or St. Charles County also sounds theirs.

Tax-Increment-Financing Reform
Yes, it’s the elephant in the room that no one wants to talk about. Tax Increment Financing, a long overused means of economic development has been abused by countless municipalities in the region and has yielded little results. TIF has mainly moved jobs around the region rather than creating new industries. While not all TIF is bad, overusing TIF can be detrimental as we have seen to the region.

What St. Louis needs, because it is so divided locally, is an agreement on the use of TIF. Below are several TIF reforms that are featured on a website, New Rules Project, that talks not only about issues with TIF but TIF as it pertains to the St. Louis region. These basic reforms are something that could benefit St. Louis and limit the harmful impacts of abused TIF. Some examples include:

City-County Plan
When we look at St. Louis, we often tend to focus on the short-term: the new shopping center, Ballpark Village, and other silver-bullet projects aiming to save another part of the area. However, what we do not focus on as much is the long-term plan as a region. Having said that, some parts of the region utilize this idea of short-term and long-term plans effectively.

Specifically in relation to downtown, we saw the original plan Downtown Now! in 1999, and after wide success, downtown leaders and residents have already created and approved its sequel, Downtown Next, which outlines several goals to help make downtown a more vibrant place to live and visit. These goals in effect create a base plan to work from and allow the process for the short-term projects to begin.

This plan like many others, namely Metro’s Moving Transit Forward long-range plan, creates a better city in which to live. These types of plans are what the City and County need to do as a whole, create one plan that will work on a multitude of fronts to create a better St. Louis region, through new efficiencies and progressive policies.

One example of this would be what is happening in New York City. Under a plan called, PlaNYC 2030, New York City has created many goals for it to achieve both in the short and long term. Some goals of the plan include “Ensuring that all New Yorkers live within a 10-minute walk of a park,” and “Providing cleaner, more reliable power for every New Yorker by upgrading our energy infrastructure.”

These goals aim toward making a better quality of life for all citizens of New York City and if we could do something like this in the St. Louis region we could both increase our quality of life and address other issues such as increasing mass transit options, building more affordable housing, and creating more programs to aid small business.

Education Reform
One of the best ways to spur job growth in a region is by creating a stronger education system. Over the past decade in the St. Louis area we have seen school districts loose accreditation. This coupled with a multitude of other issues has resulted in little job growth compared to other cities. Only through improving our education system, can we begin to see more jobs in the region.

Like the idea for some type of city/county plan, we too must establish education goals, whether it is curbing the high school dropout rate, working to expand science programs to train for the jobs of tomorrow in the bio-medical industry, or working to increase the number of students fluent in foreign language. Goals like this are what changes a region forever and makes a lasting impact, both socially, economically, and culturally.

These are just four ideas. Four ideas that do not require a city/county merger, the city re-entering the county, or any similar change, but work to create a stronger more unified region.