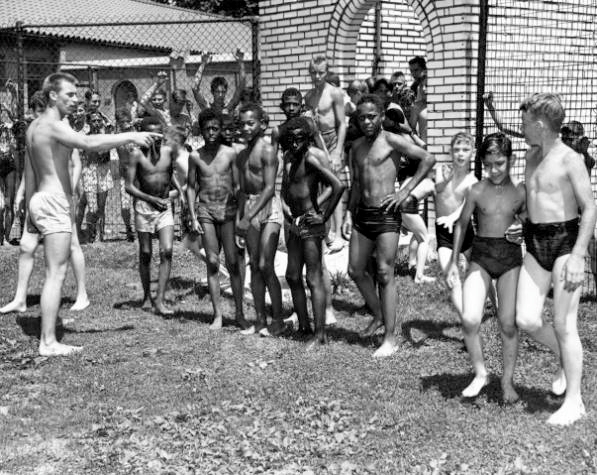 In 1912, three years after Fairground was dedicated as a public park, the city began construction of a swimming pool on the site of the former fair’s amphitheater.  It was the first municipal pool in the city of St. Louis and, just as the amphitheater had been the largest in the country, the original Fairground Park pool was the largest in the world. It had a diameter of 440 feet, almost one and a half times the length of a football field, and hosted between 10,000 and 12,000 swimmers per day.1

For 37 years the pool provided an escape from the summer heat, but only for white patrons. In 1949, St. Louis city officials decided to open the pool to the city’s black residents in response to a federal court’s holding that prohibiting blacks from using public golf courses was a violation of the 14th amendment.2

On June 21, 1949, opening day for the city’s pools, about thirty African American children entered the pool and swam with white children without incident. However, as they were swimming, a group gathered outside of the pool’s fence shouting threats at the African American swimmers. City police were called in to escort the black children out of the park when the swimming period ended around 3 o’clock in the afternoon. Conflicting eyewitness reports suggest simultaneously that the children were not subject to violence while they were under the police escort and that despite the police escort, white teenagers would periodically strike the black children without police reprisal. Reports of violence against African American youths were called into the city police throughout the 3 and 4 o’clock hours on this day.3

By 6:45 p.m., witnesses reported that a crowd of several hundred had gathered. Only 20 to 30 of the people gathered were African American youths. White boys with baseball bats surrounded a group of black boys, one of who was said to have a knife, and beat one of the African American youths until a police officer fell on top of the victim to stop the attack. At this point, the riot report suggests, the original crowd of several hundred swelled to the thousands as other park users and baseball fans on their way to Sportsman’s Park heeded the apparently false cry that an African American boy had killed a white youth. The violence that resulted required the involvement of nearly 150 police officers. Relative order was established by the 10 o’clock hour, though crowds did not disperse completely until after midnight.4 The mayor immediately reinstituted segregation policies in order to minimize the potential for future violence.

{an unidentified young man being beaten during the riot over the Fairground Pool desegregation. Photograph © 1949 by Buel White of the St. Louis Post-Dispatch – courtesy Missouri History Museum}

LIFE Magazine publicized the riot to a national audience in its July 4, 1949 issue, reporting eight arrests as a result of the violence, and noting that seven of the eight people arrested were injured. The magazine, however, did not provide information about the racial identities of those arrested or injured, instead highlighting the criminality and the bodily harm. However, the official report states that only seven people – three whites and four blacks – were arrested; this despite the fact that, of the six people who were seriously injured, five were African American. Three African Americans and one of the white youths who were arrested were ultimately charged with inciting a riot according to the official report.5 LIFE also claimed that 400 police officers intervened to restore order, as opposed to 150 officers as stated in the official report. These conflicting reports are probably the result of the purpose of each of these publications as the official report was to provide the political record of the event whereas the LIFE Magazine article played upon national concerns about racial integration.

George Schermer authored the official published report of the riot for the St. Louis Council on Human Relations entitled “The Fairgrounds Park Incident.”  Schermer concludes that “community leaders” believed that “only a very small number of persons of the ‘hoodlum’ type were actually involved.” According to this report, the leaders believed that the majority of the city’s residents did not approve of the violence and “that highlighting the story in the press and labeling it a ‘race riot’ has been an injustice to the City.”6 The ultimate result of this report was to downplay the role of race in the riot to ensure that St. Louis did not become synonymous with racial violence the way that Detroit, Chicago, and East St. Louis previously had. Even the title of the report downgrades the riot to an “incident.”

This “incident,” however, serves to highlight many issues that are central to St. Louis’s racial history. In March 2002, The Riverfront Times published “The Longest Day,” in which Eddie Silva opens by describing a scene from the race riot that, he argues, “has been erased from the city’s collective memory.” This article revisited the significance of the riots in the context of race relations in St. Louis after a particularly violent summer in 2001 that “turned Fairgrounds Park into yet another symbol of racial fear.” A 2009 Post-Dispatch article, on the 60th anniversary of the pool riot, identified the riot as “pivotal” to the history of race relations in the city. The recollections of Robert Gammon, an African American who was 13 at the time of the riot, serve as the centerpiece for this article. In this video, Gammon recalls his experience of the riots as he visits the site with a reporter from the St. Louis Post-Dispatch.

We don’t talk about this part of our history because it forces us to confront the city’s racial divisions. However, not talking about the riot does not mitigate its effects on the city’s racial history or its effects on the city’s current racial climate. In 1950, the year after the riot, public pools were integrated once more, this time without incident. Within the first year after integration, though, attendance at the Fairground Park Pool decline by 80%.7 By 1954, the pool was no longer profitable enough to be maintained appropriately, and the city closed it down. Between 1950 and 1960, the population of the city of St. Louis dropped by 107,000 residents while the number African American residents increased by 10%. The demographic shift created by white flight from the city began in earnest at the same time that the Fairground Park Pool became an integrated facility.

I do not mean to imply that white residents left the city because the pool was integrated, but rather, I believe that the pool and the riot are symbolic of larger social issues with respect to race in the mid-20th century. At the time, city officials sought to quell fears of the effects of racial integration though the actions of city residents suggest that the political rhetoric had little effect. In retrospect, it is clear that the Fairground Park Pool riot was a more significant occurrence than city officials were willing to admit. To ignore the riot is to ignore the history of race relations in St. Louis.  And to ignore the history is to ignore the legacy that shapes race relations in our city today.