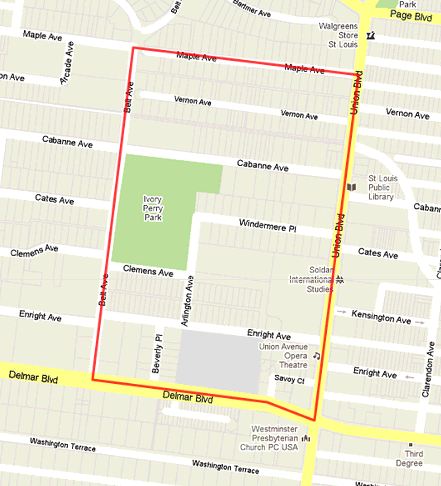 Visitation Park is a small neighborhood located north of Delmar, west of Union, east of Belt and south of Maple. The neighborhood is in a great location, just north of Forest Park and some of the most exclusive properties and streets in St. Louis (Skinker/Debaliviere, CWE, etc.). It is also just east of the East Loop retail and entertainment area. The potential of this area is huge.

I am becoming obsessed with north city neighborhoods. I hope I don’t skim over the established south city hoods like Princeton Heights, Lafayette Square, Holly Hills, Southampton, St. Louis Hills, etc. It’s just I’ve been to these places a million times, I have personal memories and connections with the central and south side, that it’s harder to objectively portray them and detail them as they are part of my backyard. The north side neighborhoods are still a mystery and it’s fun trying to piece together the history of this city and where people choose to live.

You know how stereotypes typically are true or at least commonly held beliefs? Well the fact that Delmar is the north/south divider of St. Louis could not be more true. It’s a racial, cultural, psychological, economical divider of this city. Visitation Park rides that dividing line. The feel of this neighborhood is that of one on the edge. It could be great, it could be mediocre. The future is in the hands of those currently in charge and currently living there.

The demographics from the 2000 census data indicate that this is a largely black neighborhood, as are all of the north side neighborhoods. 90% counted were black, 8% white, 1.7% mixed races and the other races making up the difference. In my adventures so far, I’ve found that Hispanics/Latinos and Asians are nowhere to be found in north city. North city suffers from a complete lack of diversity in most of it’s neighborhoods. However, the same could be said for Princeton Heights (95% white), but that’s where the similarities end. Visitation Park has a completely different family structure than the PH neighborhood. The good news is the occupancy rate is 85% and it had a modest gain in population from 1990 of 2% for a total of 1033 residents. Way to go Visitation Park! Although I think most of the gains are due to new (read suburban style) housing constructed right next to the stately homes. 78% of housing is rental, leaving 22% owner occupied. However the last decade has had several rousing success stories in Visitation Park which I’ll get to in a moment. These successes may add even more residents in the 2010 counting.

By and large, north city is all black. This is another stereotype I’ve heard for years, and it’s largely true based on my experience so far. Duh, you say…do you live under a rock? Kind of, I just don’t know the north side of my city. Sadly. But, that’s part of my goal of visiting every neighborhood, to somehow connect with the place and the issues both good and bad that hit me on my first impression. Also, with my kids going to public school, I’m starting to meet more and more people that live north of Delmar.

So that’s who lives here, now let’s take a look at what Visitation Park looks like today. From the neighborhood website:

Although one of the smaller of St. Louis’ neighborhoods, Visitation Park touts an abundance of architectural, cultural and historic significance. During the 1890’s and through the World Fair years, this neighborhood became home to exclusive subdivisions, small private places, as well as, prominent St. Louis landmarks. One of the last bills of Alderman C.B. Broussand was to create the Visitation Park Historic District in 1975 because the majority of its dwellings were built between 1890-1920.

This vintaged neighborhood is characterized by beautiful homes on quiet private streets; many of which have been lovingly rehabilitated, earning a listing on the National Register of Historic Places. Residents are active in the preservation and development of this area. Houses vary from large turn-of-the-century to newly developed homes. Multi-family units are available and most of its apartment buildings were built during the 1910-30 period… Cul-de-sacs were built at the end of the avenues to promote safety and create peaceful private places…”

I think this is a very accurate description. And just like every other neighborhood I’ve visited so far, it is a fascinating place. Faded beauties existing in a kind of pastoral setting. Pastoral in that there are literally pastures (fallow fields of emptiness to the direct west of Visitation Park) and a huge park at it’s center called Ivory Perry Park which hasn’t seen much love and care. In fact there are some beautiful homes on Clemens Place just south of the park, but the city has allowed residents to store abandoned, ramshackle cars/trucks, buses and RVs on the easement property of the park. It looks terrible and I don’t know why the city allows this type of stuff to occur. On the other hand, why do the residents allow this kind of dumping/storage to occur?

Visitation Park is extremely small in actual area. It’s streets are insanely disconnected and cutoff from each other. This was a purposeful dis-configuration of the original street grid, probably to curb speeding and crime. There is no access to the neighborhood from Belt which runs the length of the entire westside! However, these are meant to be “private streets”, but at one time it was more connected and Schoemehl pots, etc have been put in place to block thoroughfare. It is almost impossible to navigate your way east, west, north and south through the neighborhood. This has got to change if Visitation Park will every be connected with it’s neighboring streets and properties. I walked away from this neighborhood frustrated at how hard it was to get around.

Starting at Delmar and Union is one of my favorite apartment buildings in the city. It reminds me of a lego castle: 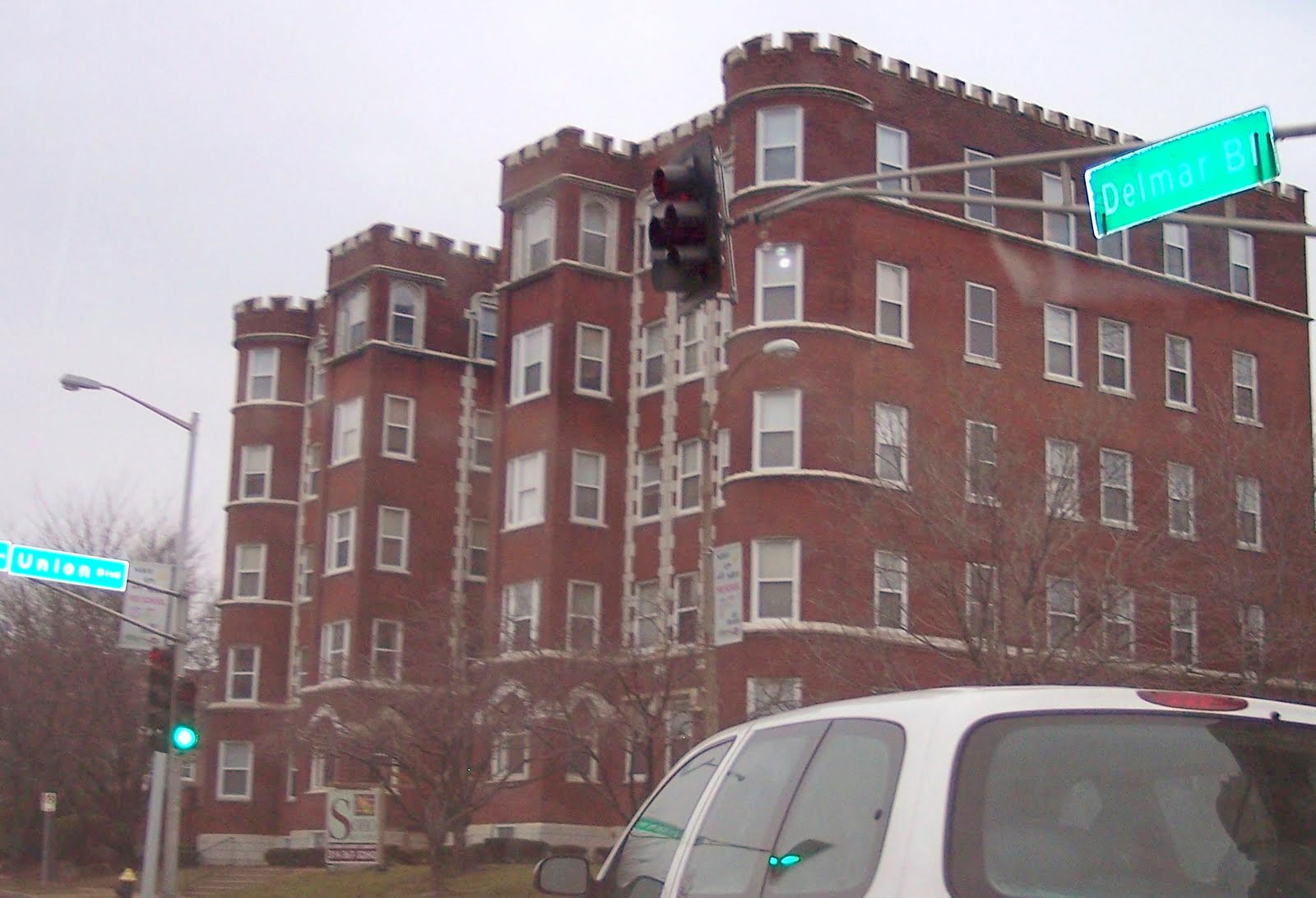 The two major institutions of the neighborhood are the Metropolitan Psychiatric Center (MPC) which is a huge contemporary building right along Delmar. In many ways the MPC is the third structure in a legacy of caring for the mental patients in St. Louis. Malcolm Bliss Psychiatric Institute was founded in 1938, followed by the Malcolm Bliss Mental Health center dedicated in 1964 and finally this MPC which was founded in 1996 and dedicated by then governor Mel Carnahan and then mayor Freeman Bosley. The facility has a big presence along this stretch of Delmar. It’s a 112 bed acute inpatient hospital operated by the Dept. of Mental Health of the State of Missouri.

The second major institution is Soldan International Studies High School. This sounds like an amazing place, which reopened as a magnet school in 1993. There are also 2 other curious structures (other than the amazing old homes) that will catch your eye should you visit Visitation Park. Roberts Place and the Winston Churchill Apartments which I’ll get to in a moment.

Beverly Place is one of many private streets that caught my eye. In fact I think all the internal streets within Visitation Park are non-through streets. Beverly is right off Delmar just west of Union and has some stunning homes, most in the >$285K range. 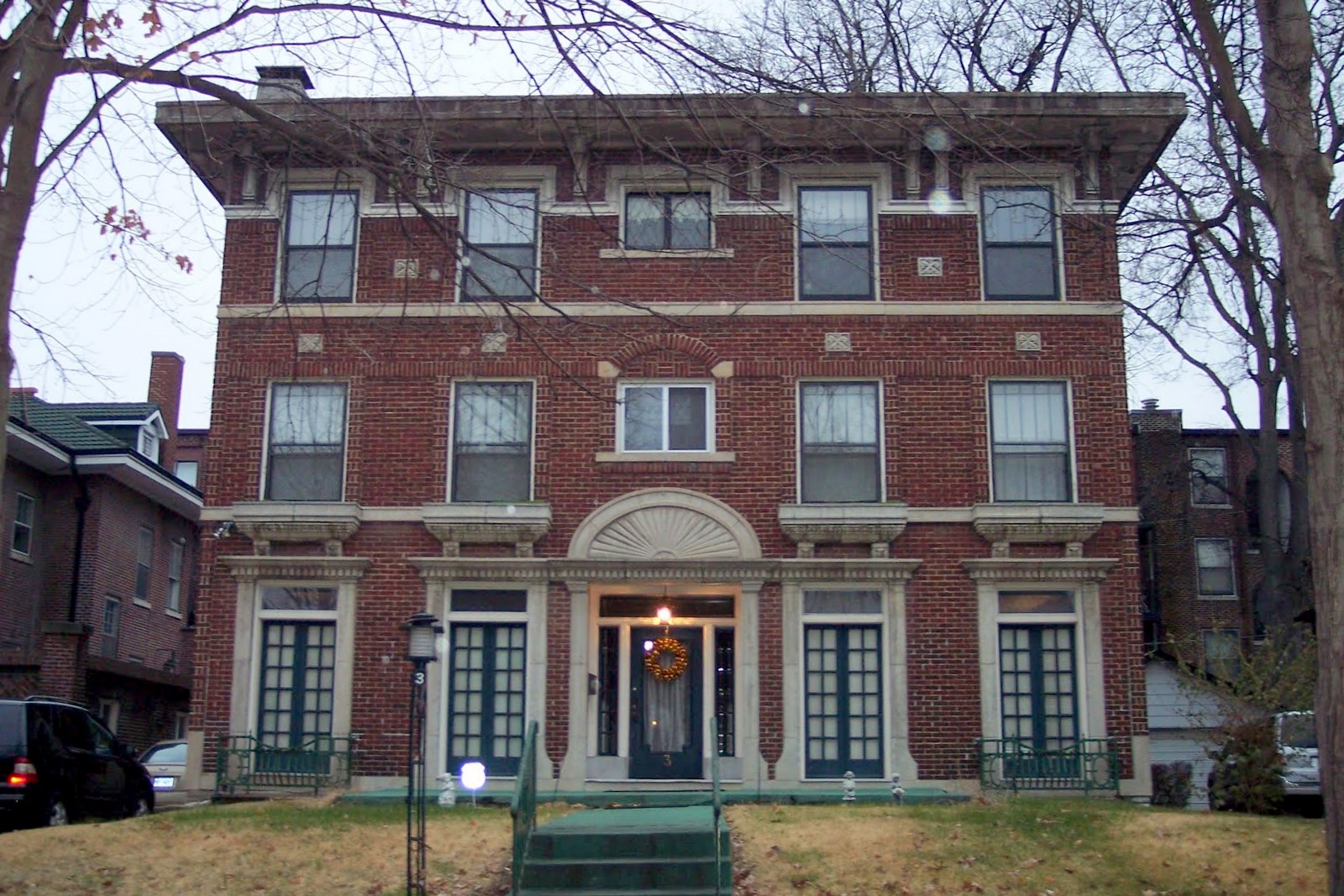 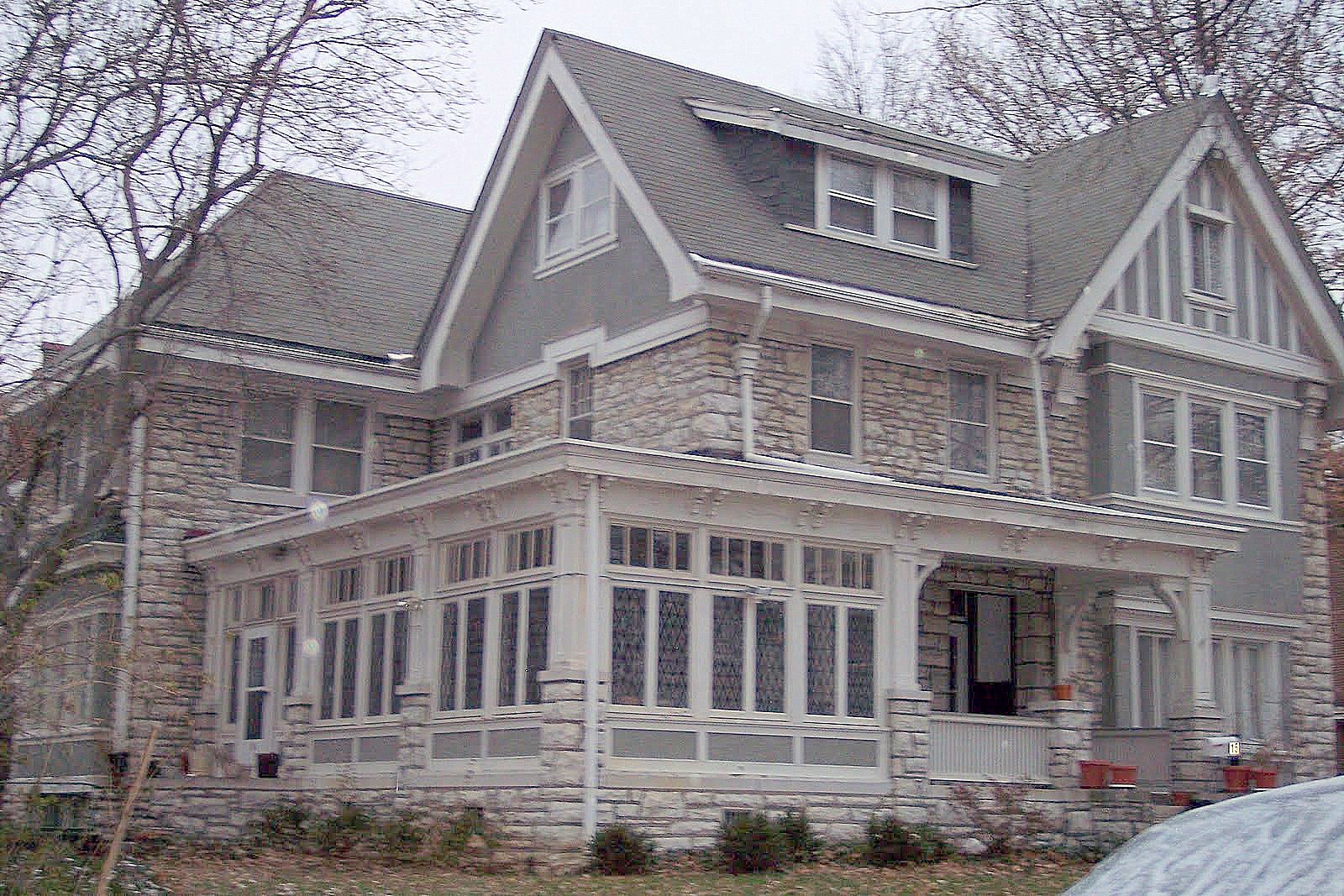 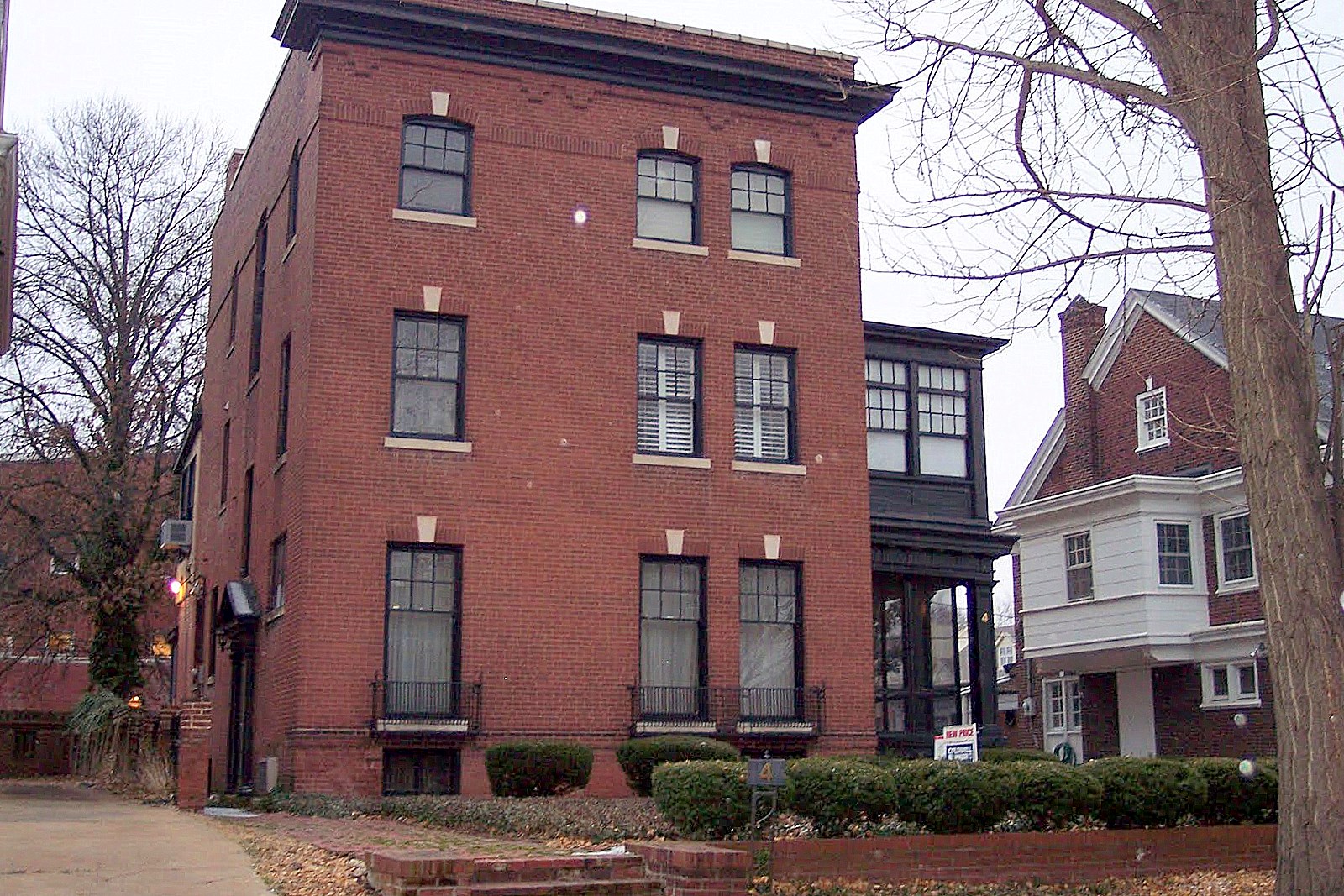 The other private streets in the neighborhood have some awesome homes in various states of repair from completely renovated to pretty rough. The worst thing in my opinion aside from the dead end streets is the lack of oversight on new construction that has been allowed to be built in Visitation Park. How the city rubber stamps these homes is beyond me. I for one would never invest in fixing up one of these mansions if it sat right next to a contemporary suburban home. They stick out like a sore thumb and destroy the continuity and historical fabric of the neighborhood.

I don’t mean to diss someone’s personal residence, and I hope someone doesn’t look at this post and say hey that’s my aunt’s house and take offense. It’s just that we need contextual zoning that disallows these kind of homes to be built in the city. It doesn’t fit in and it doesn’t belong here, on this street in this block next to these homes. There are several other examples of newer construction that has/had started as you can see in some of my photos where the foundations that have been poured. These appear to be much better choices as they are meeting the setback as their neighboring properties.

The classics are mixed with the not so classics: 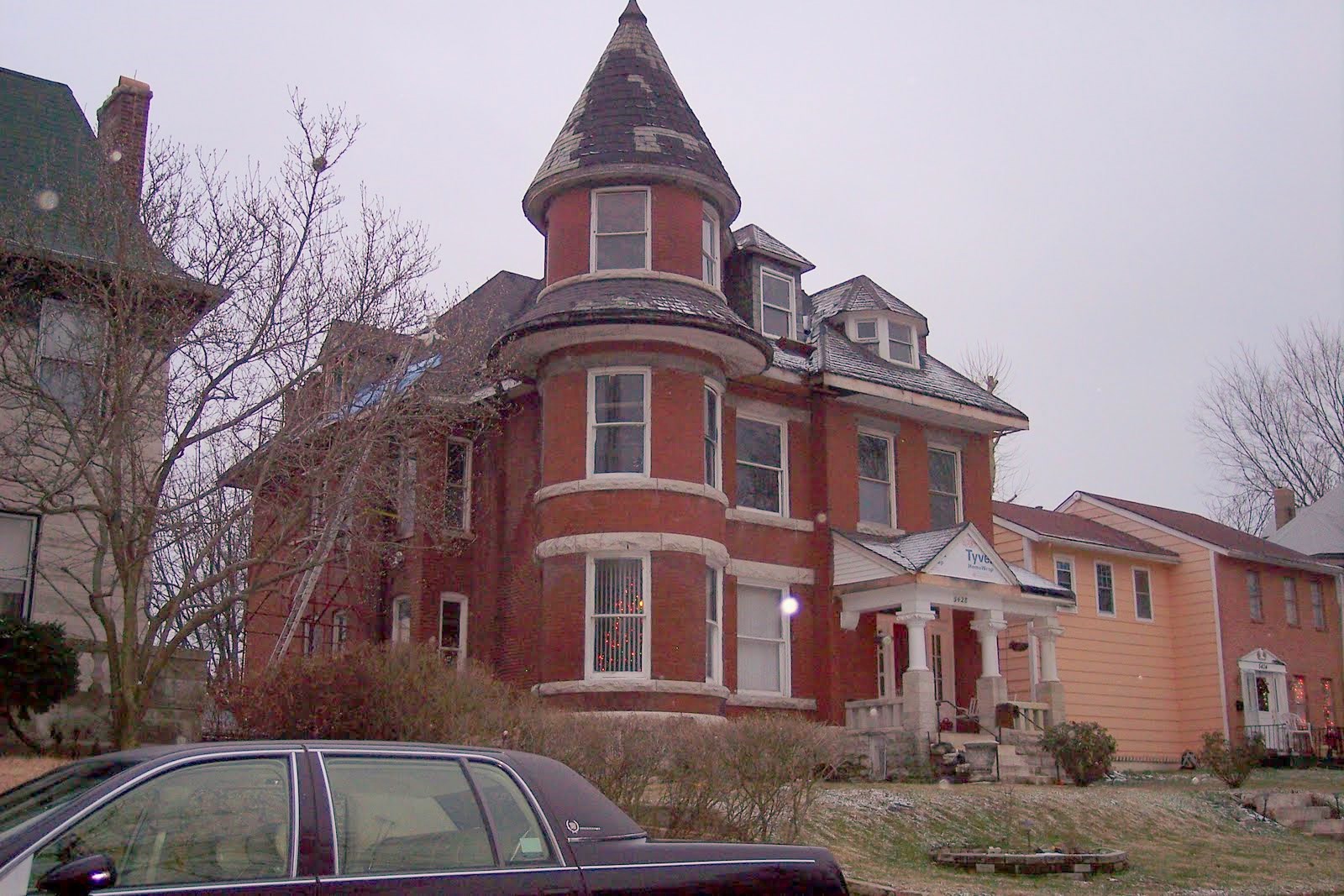 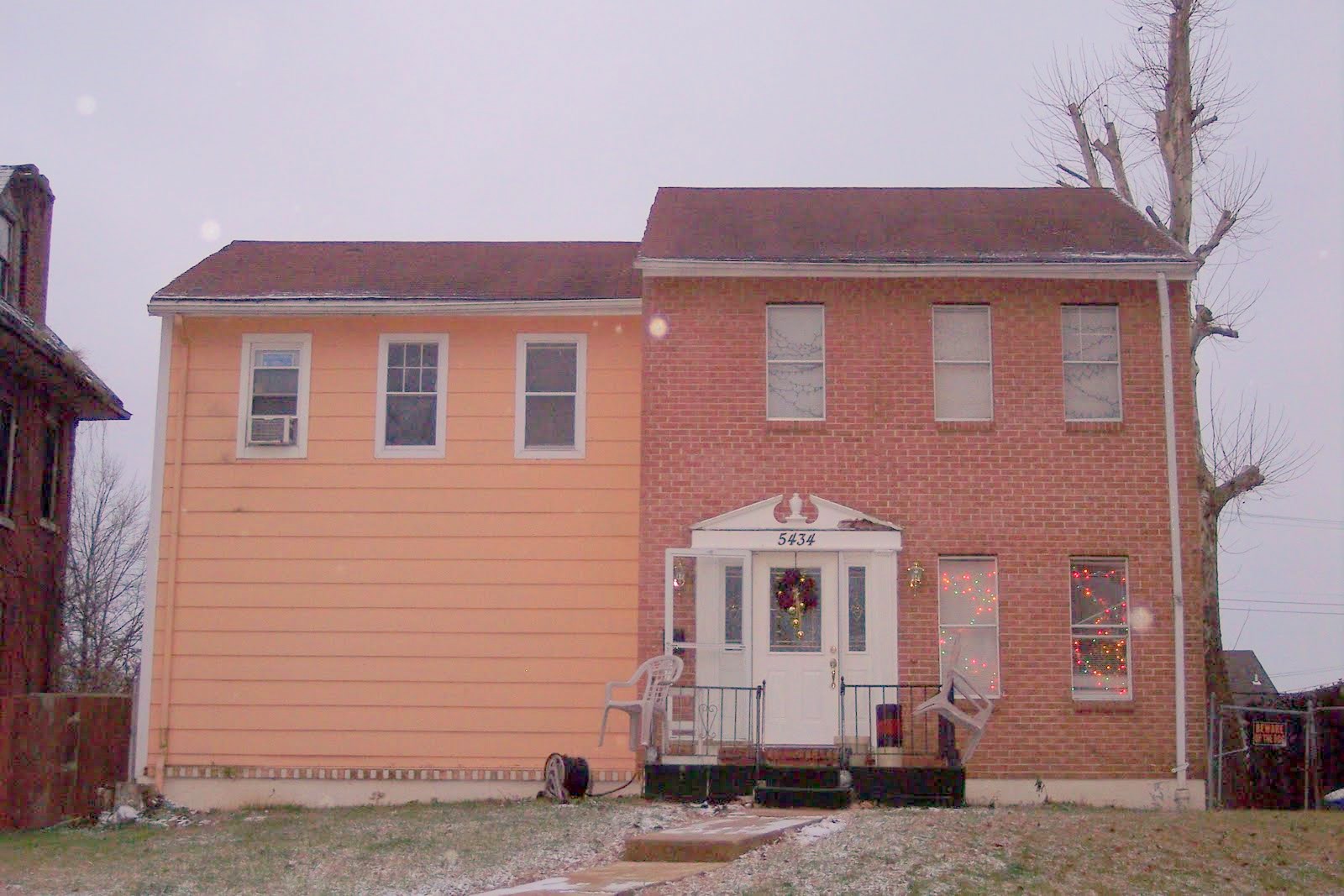 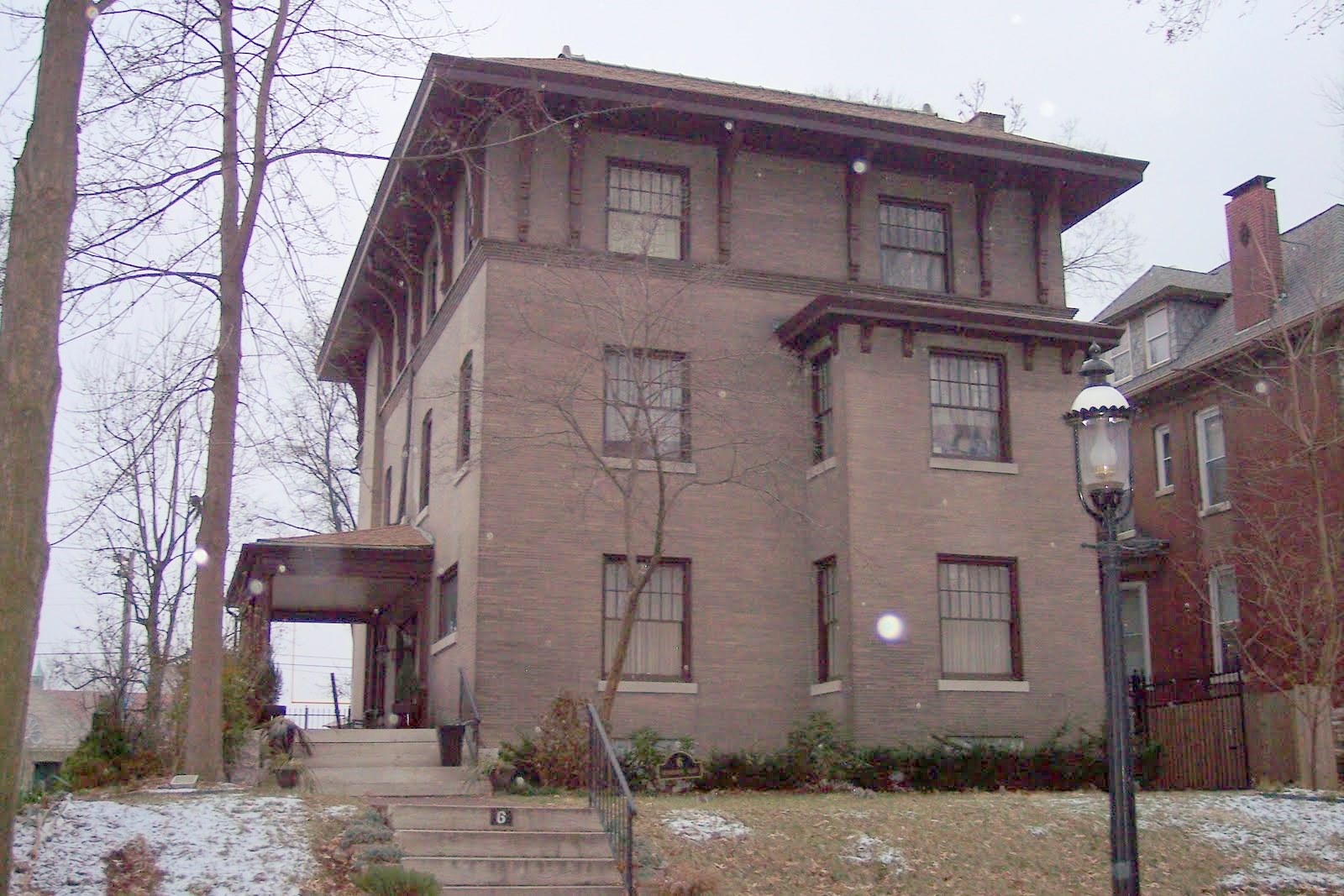 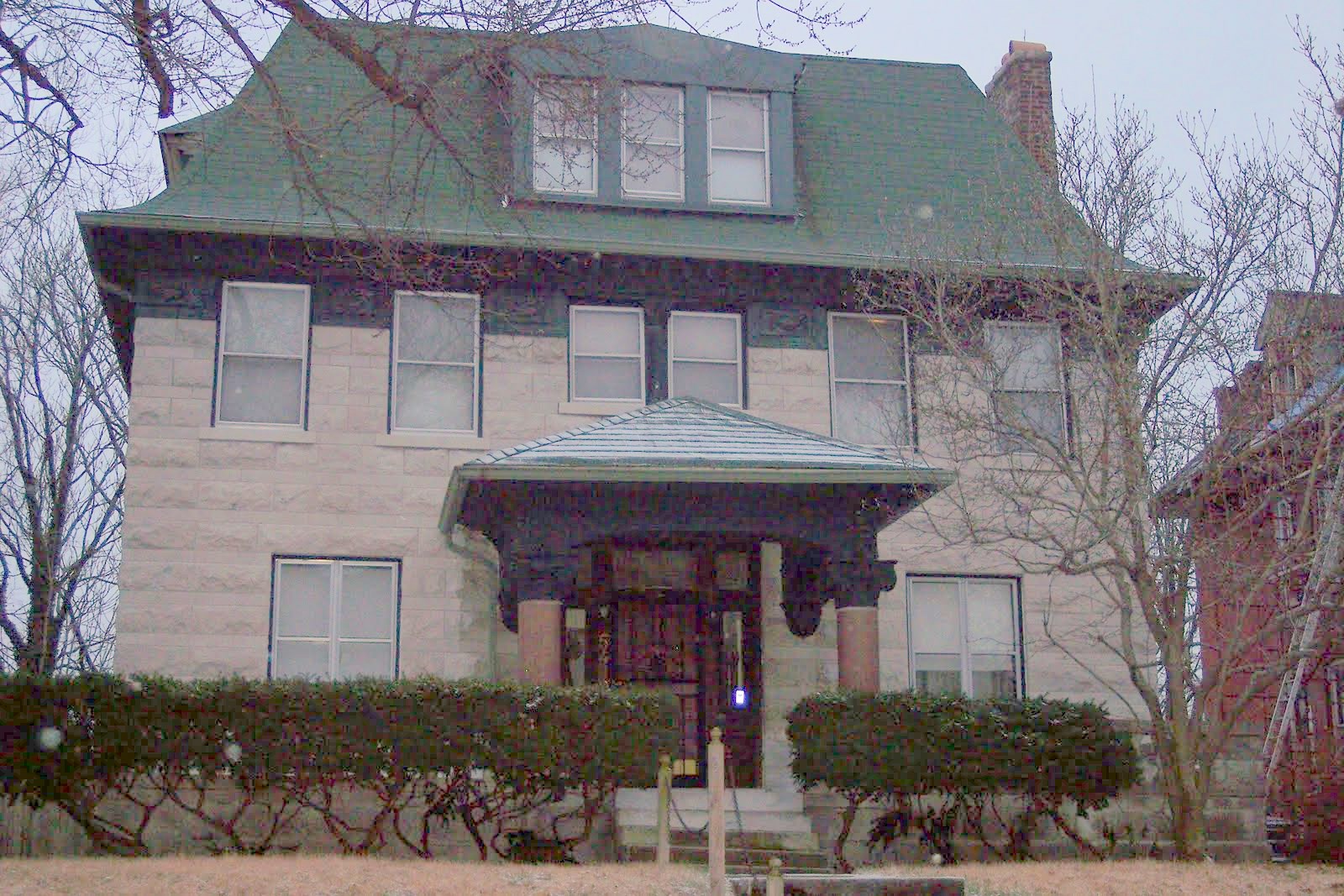 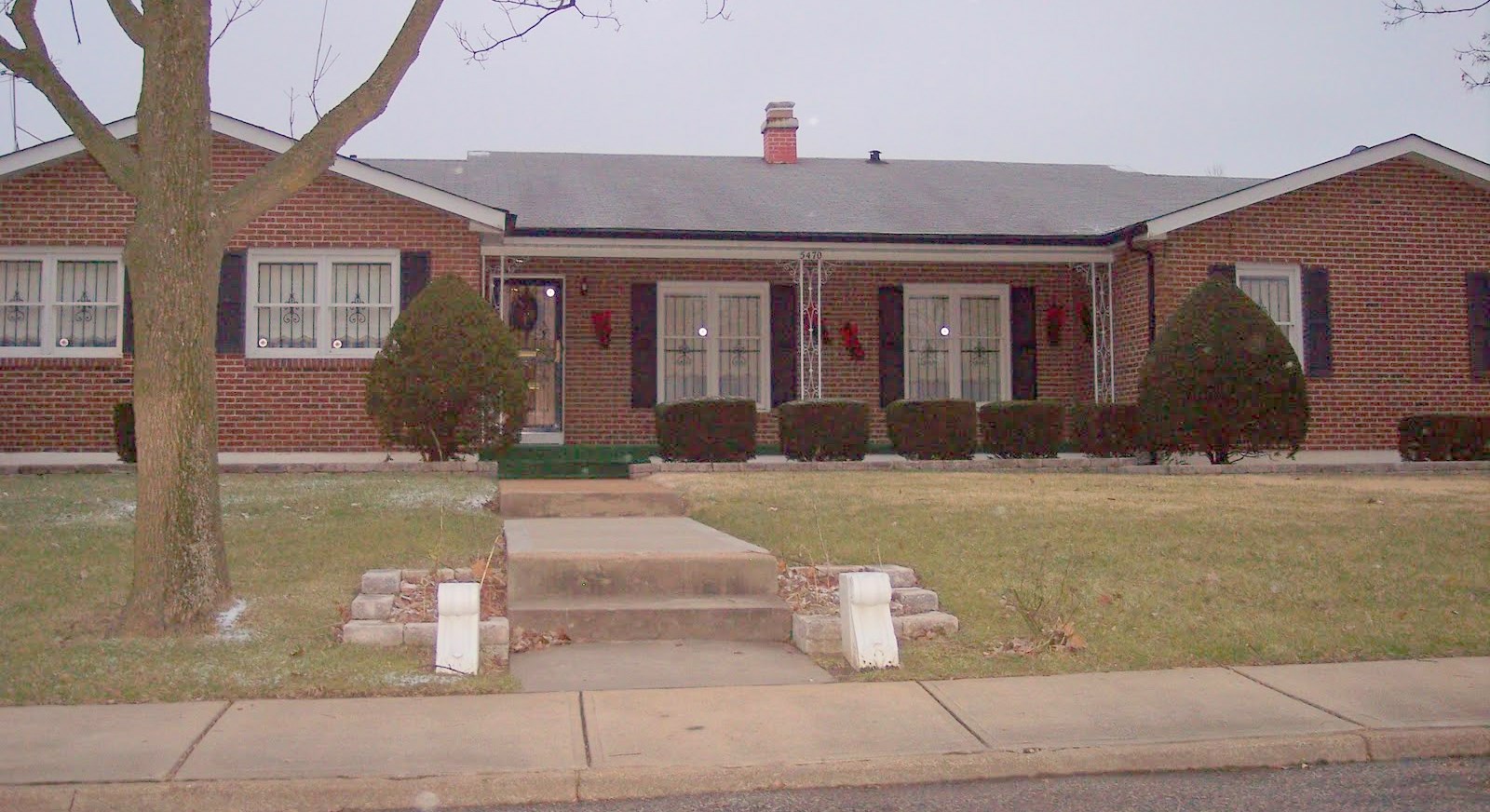 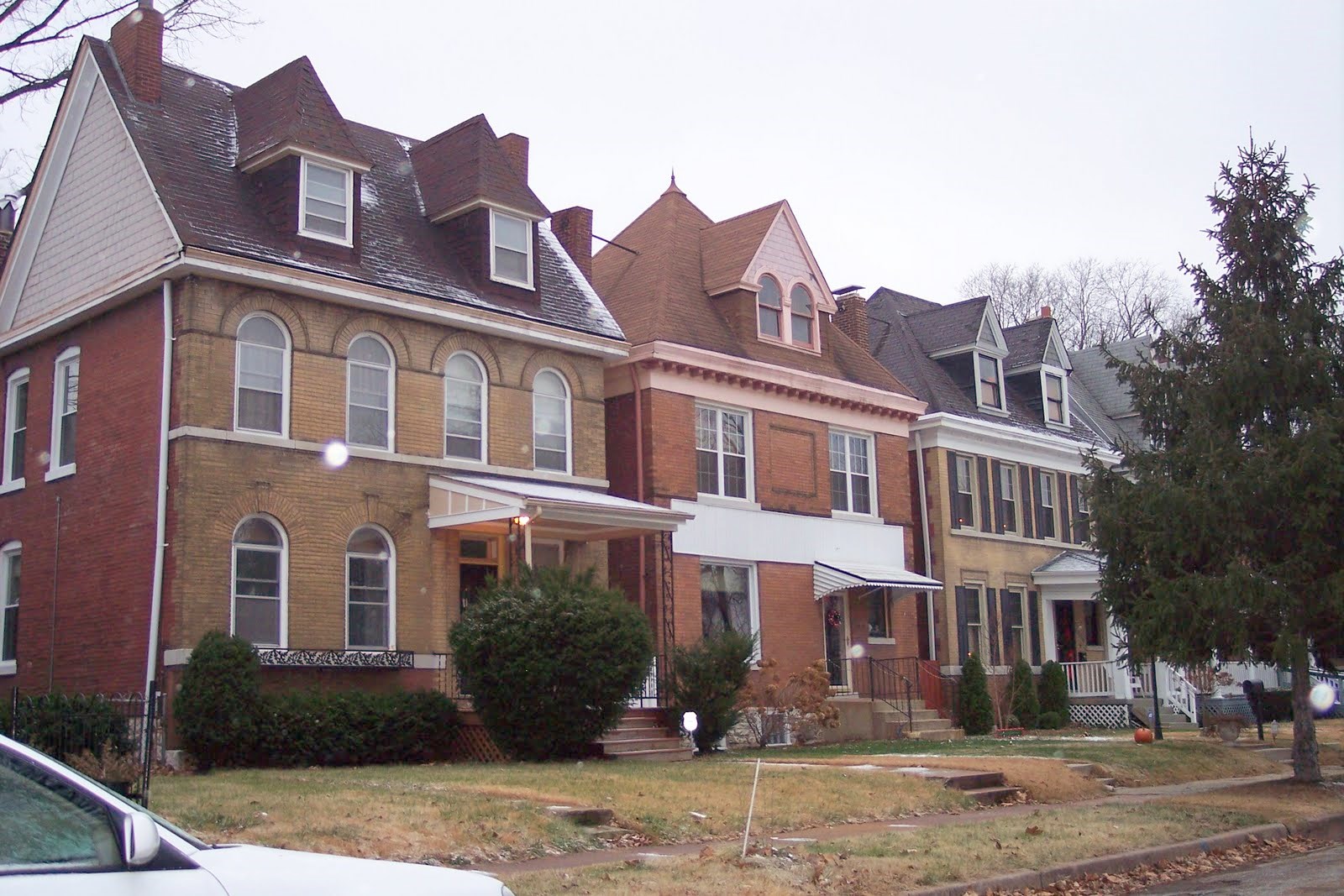 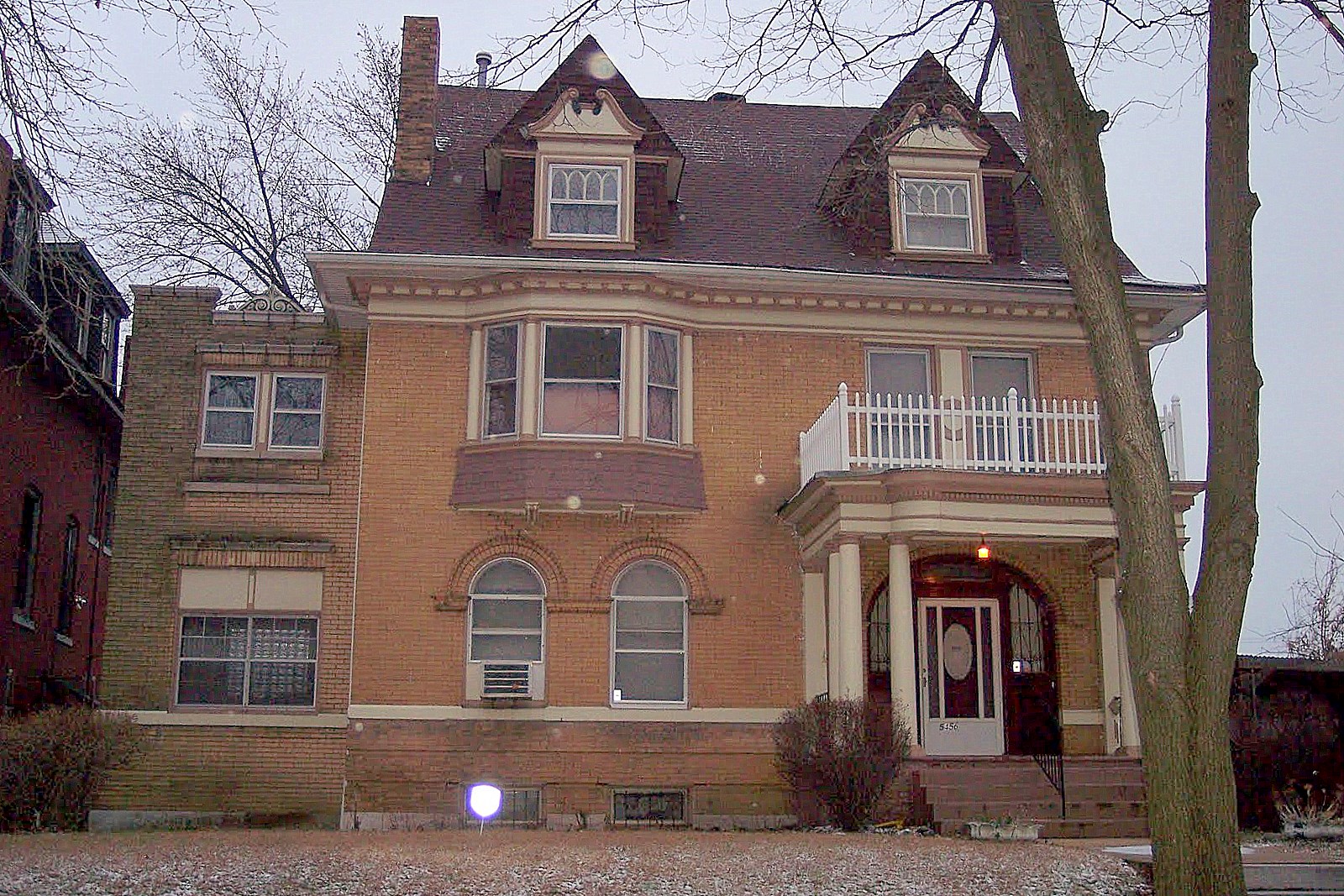 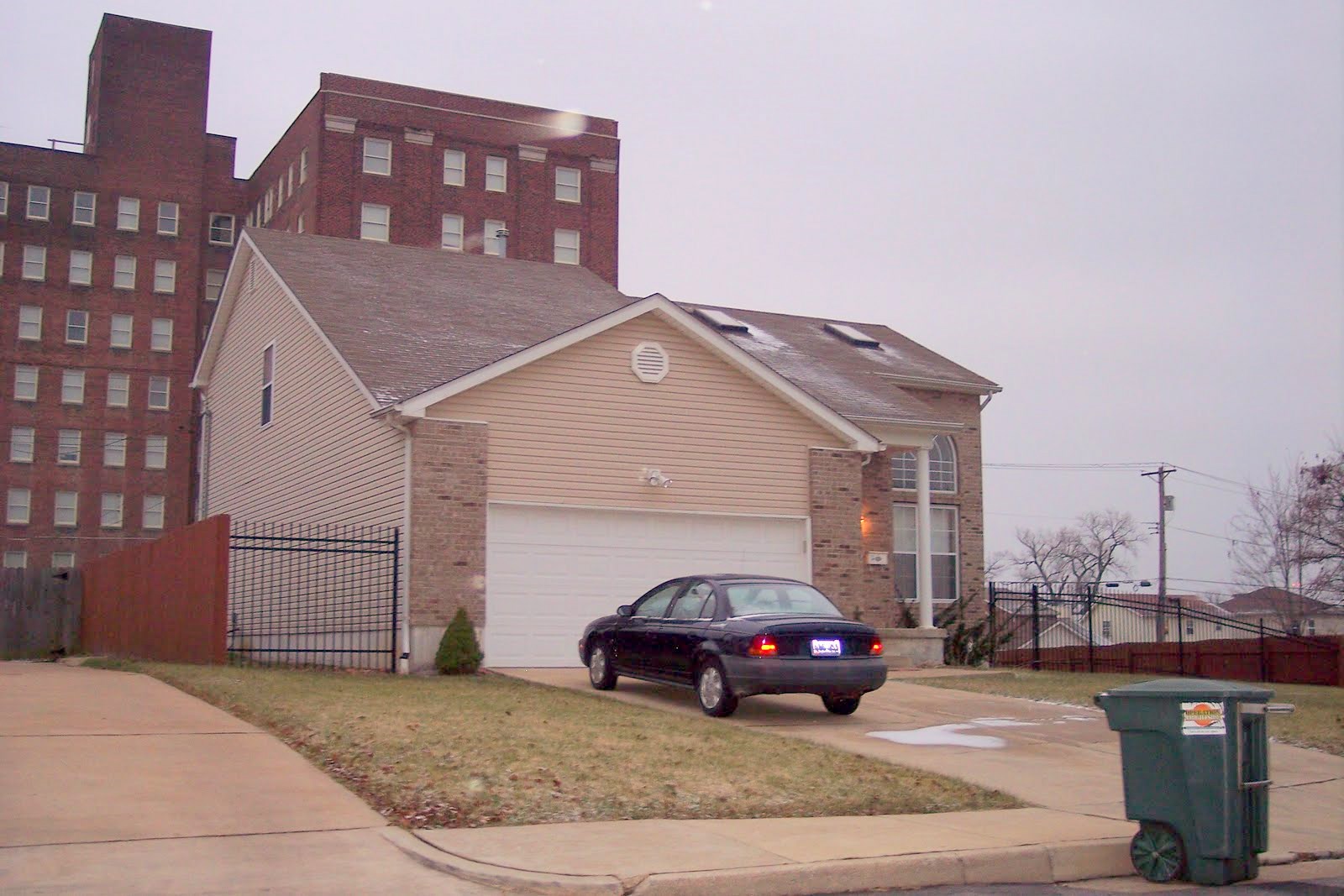 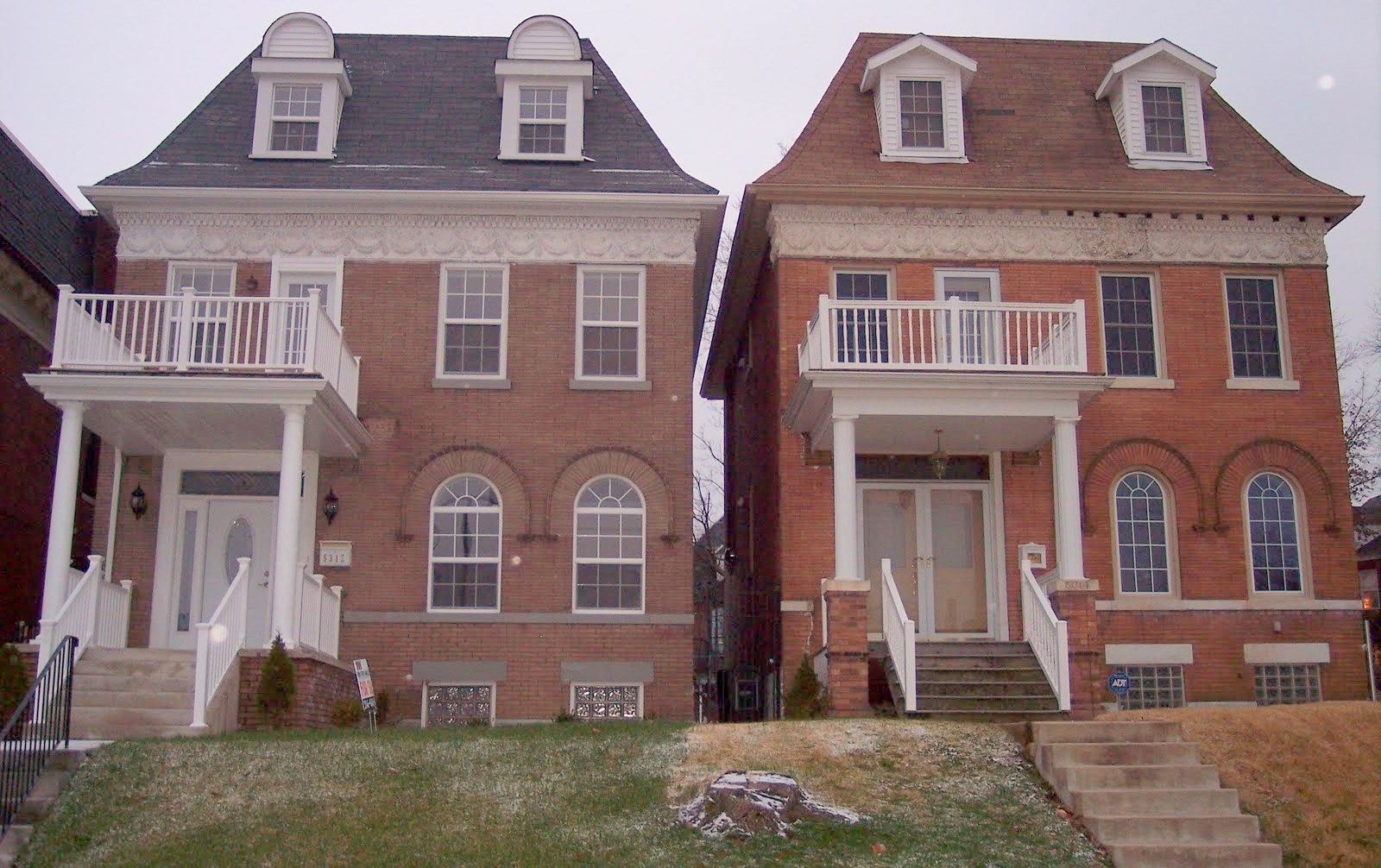 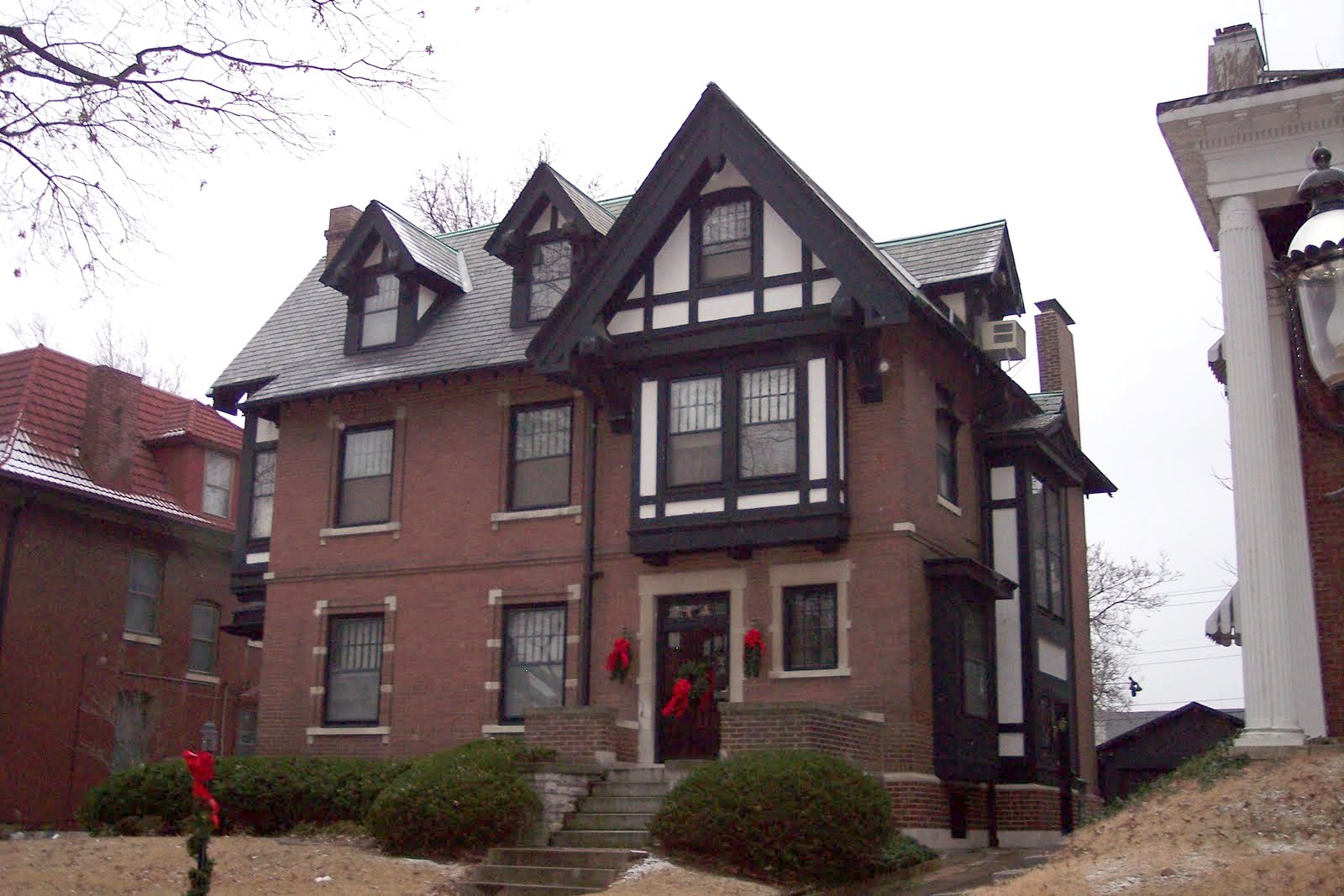 Shear, utter beauty I tells ya: 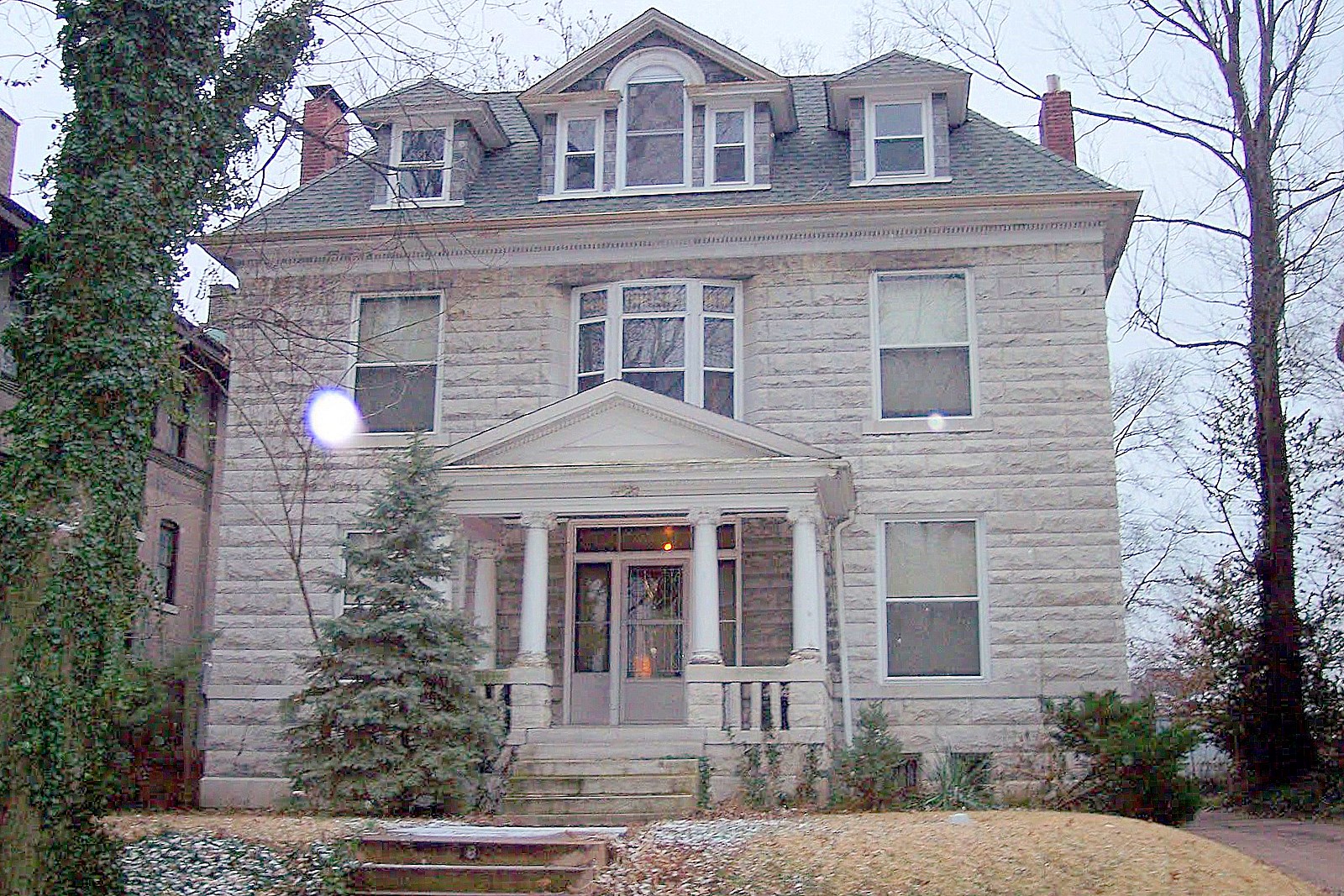 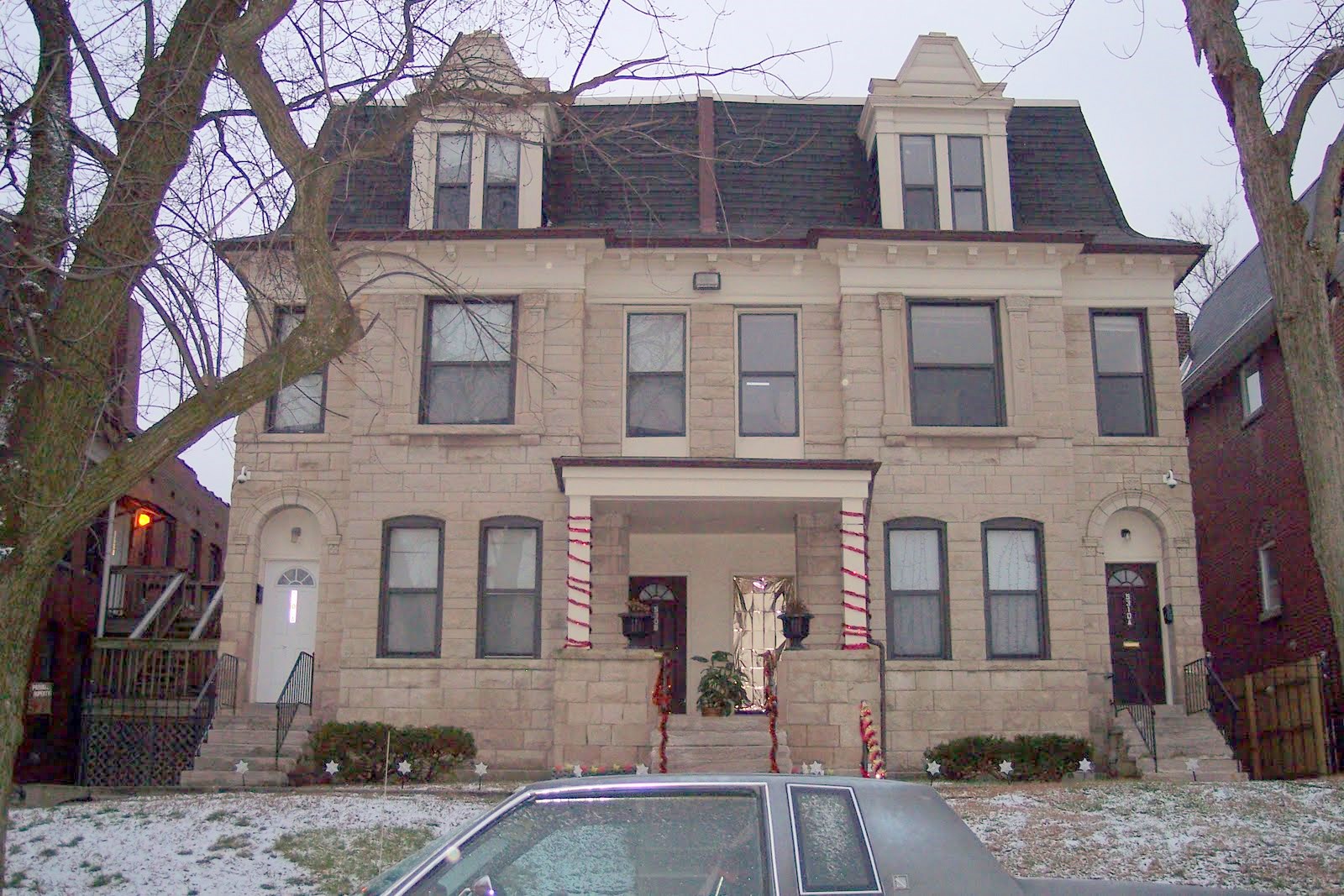 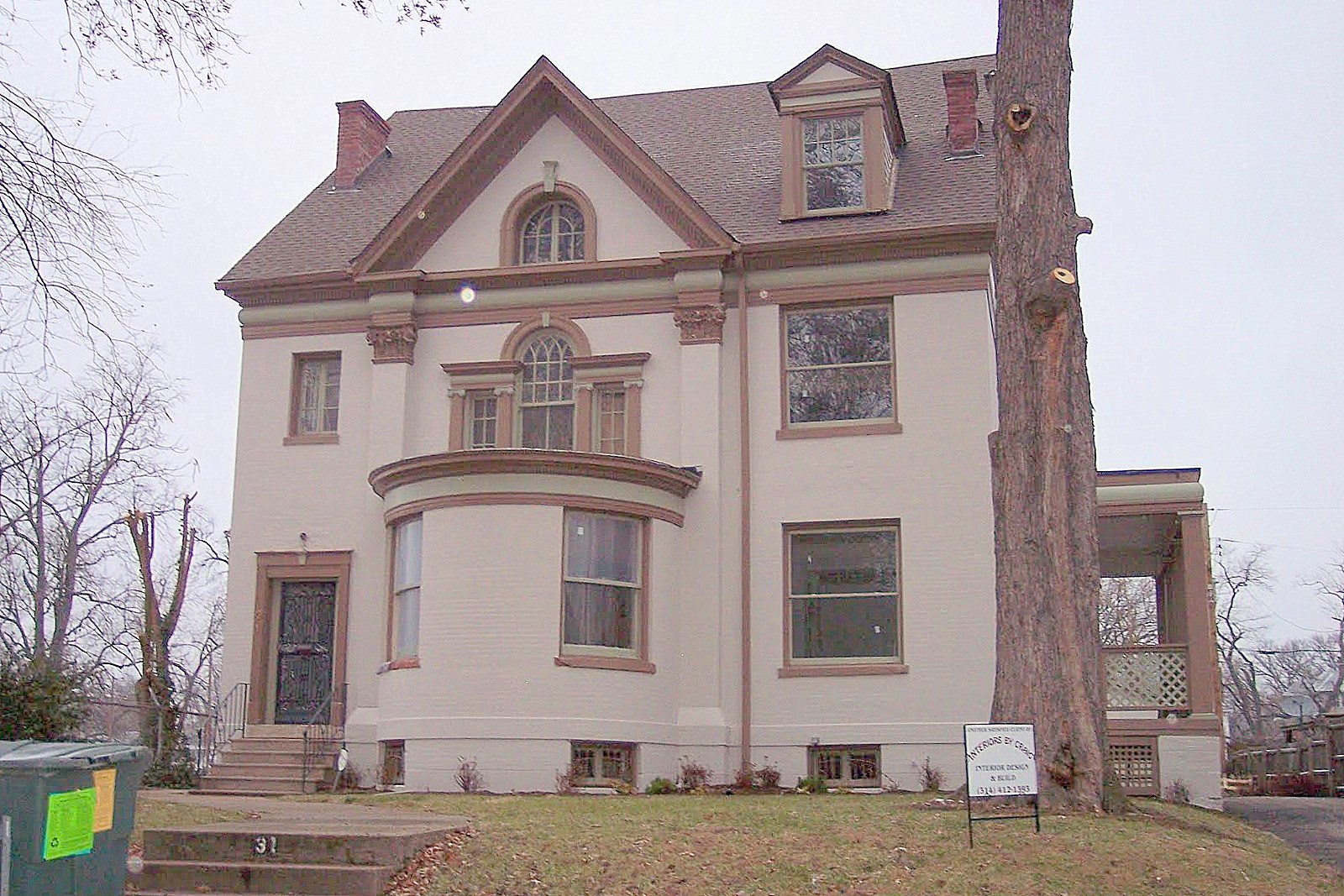 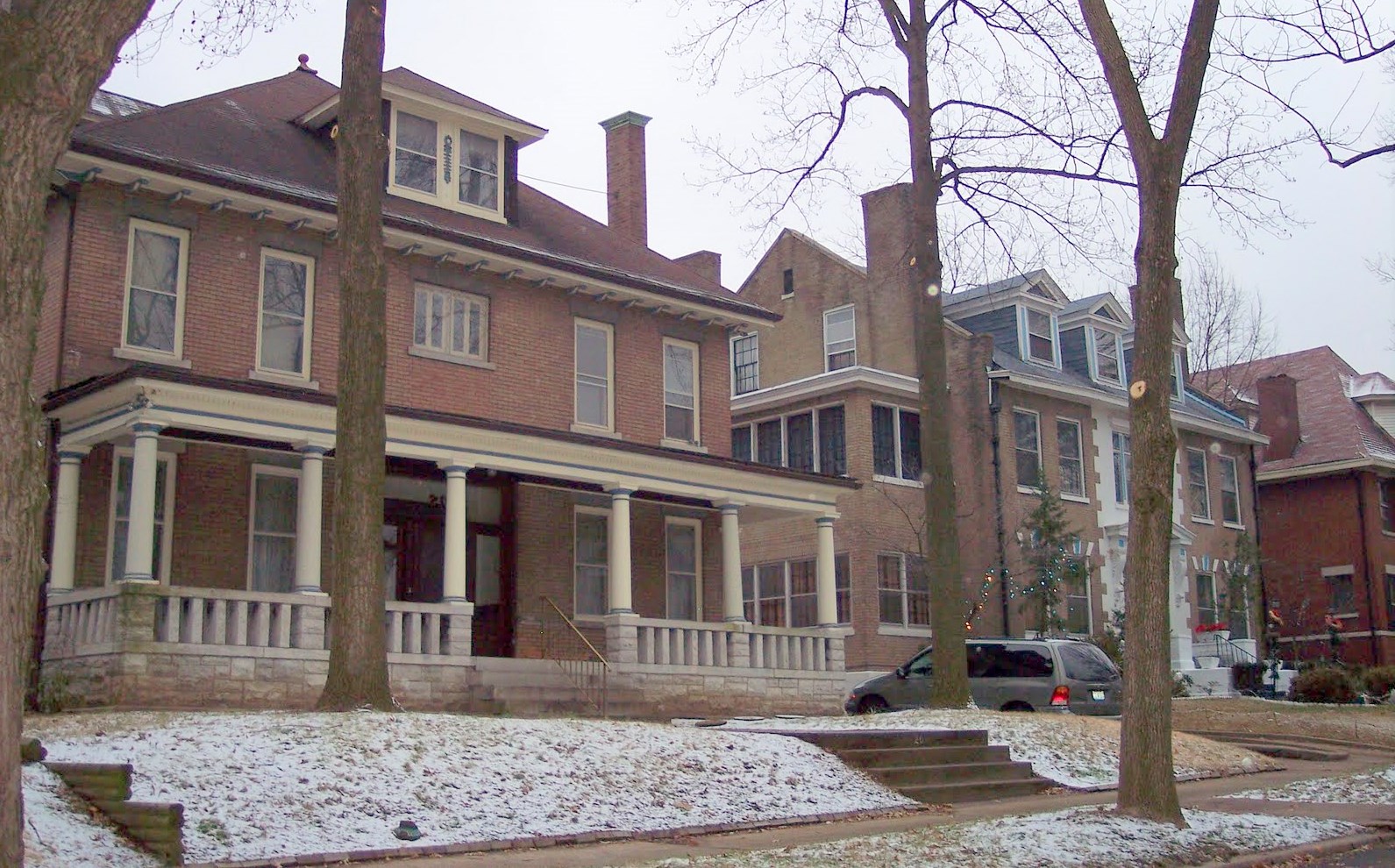 My dream is to someday purchase a home to renovate. The following photo is a property that seems to fit the bill: 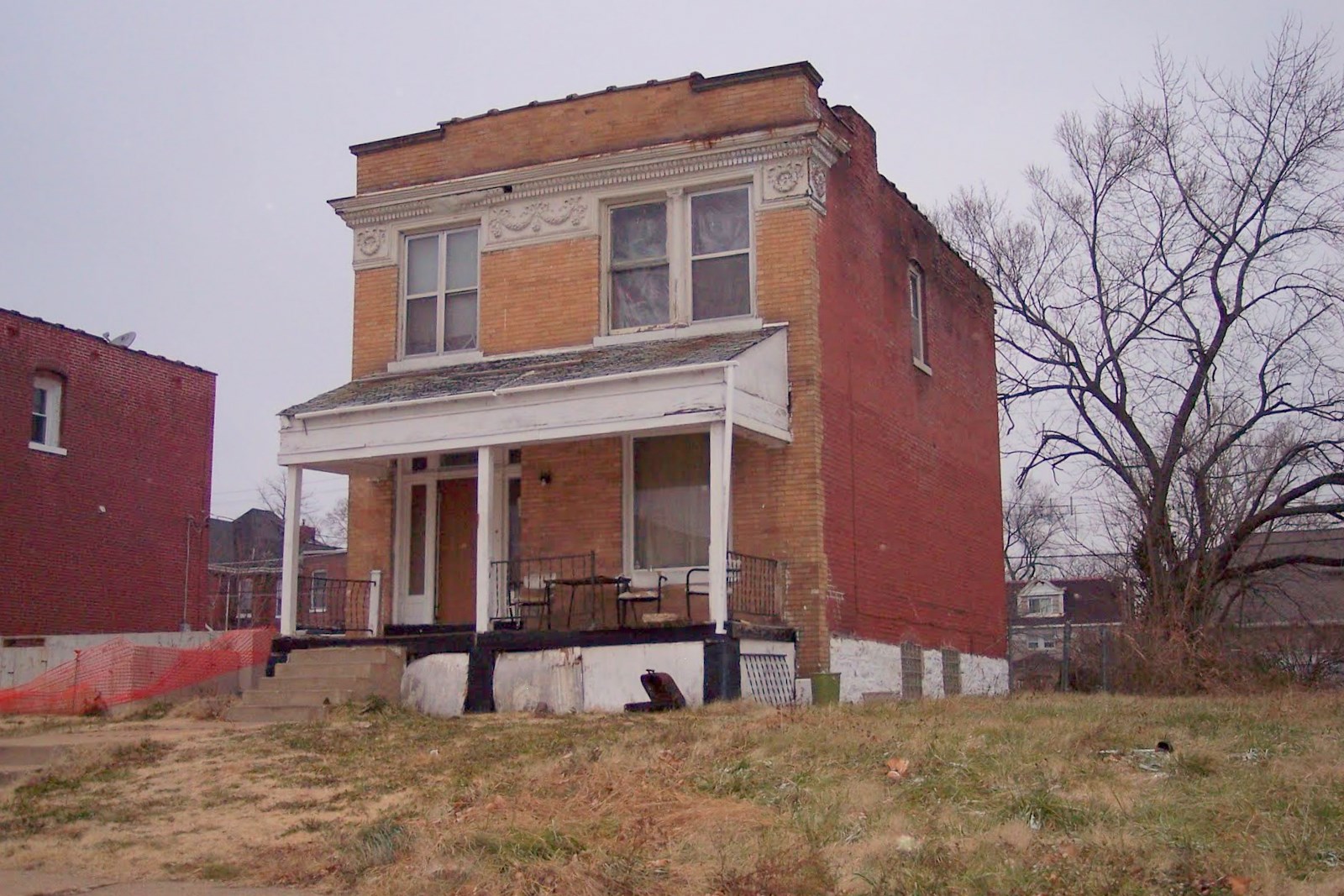 Note the promising foundation poured to the west of this home, it matched the setback of the 2 older homes. However with the empty lots to the east, I don’t think I’d pour my time and money into it if this is allowed to be constructed right next to it: 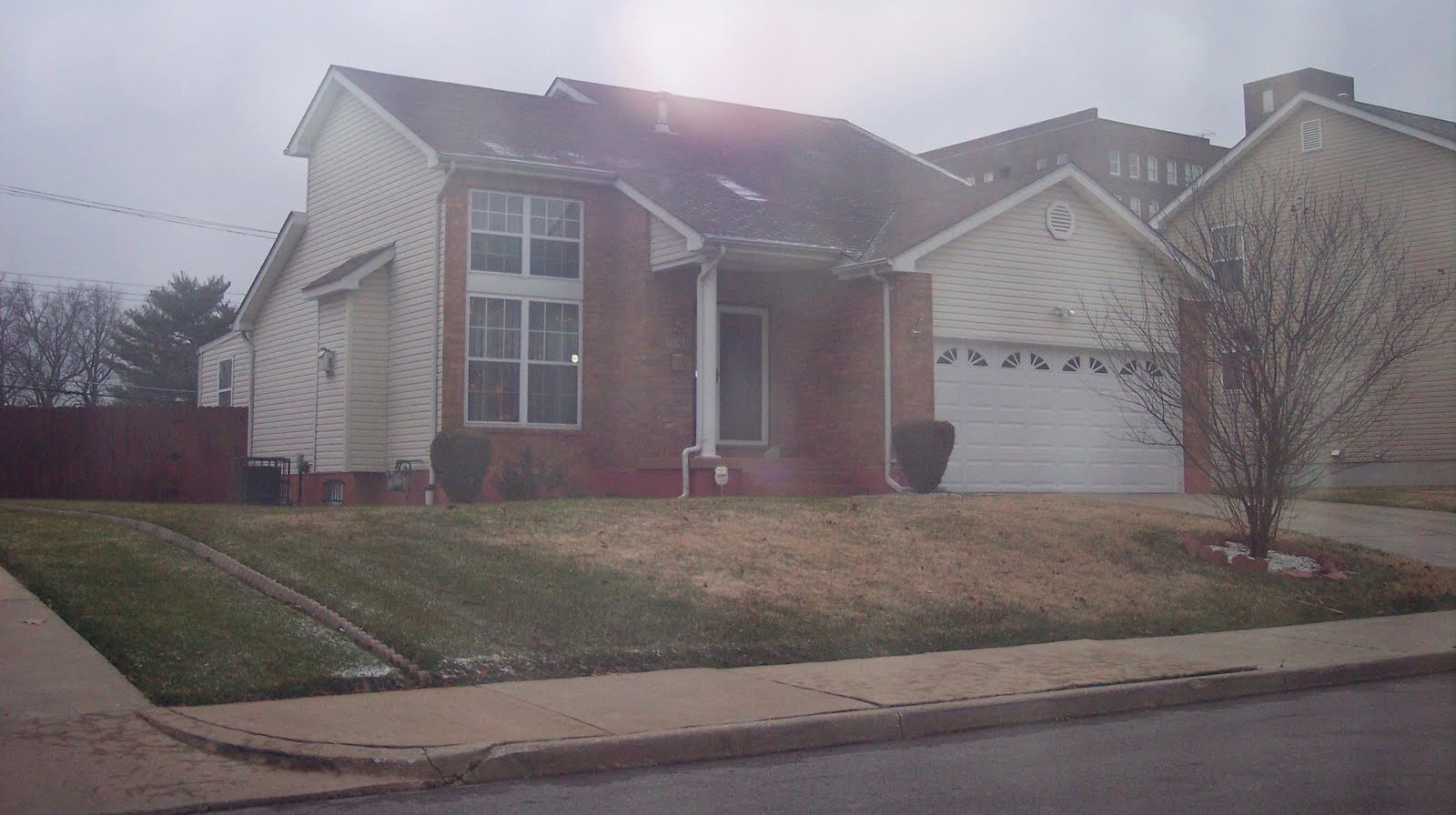 As with most St. Louis neighborhoods, there are cool looking churches, Visitation Park has the Union Avenue Christian Church: 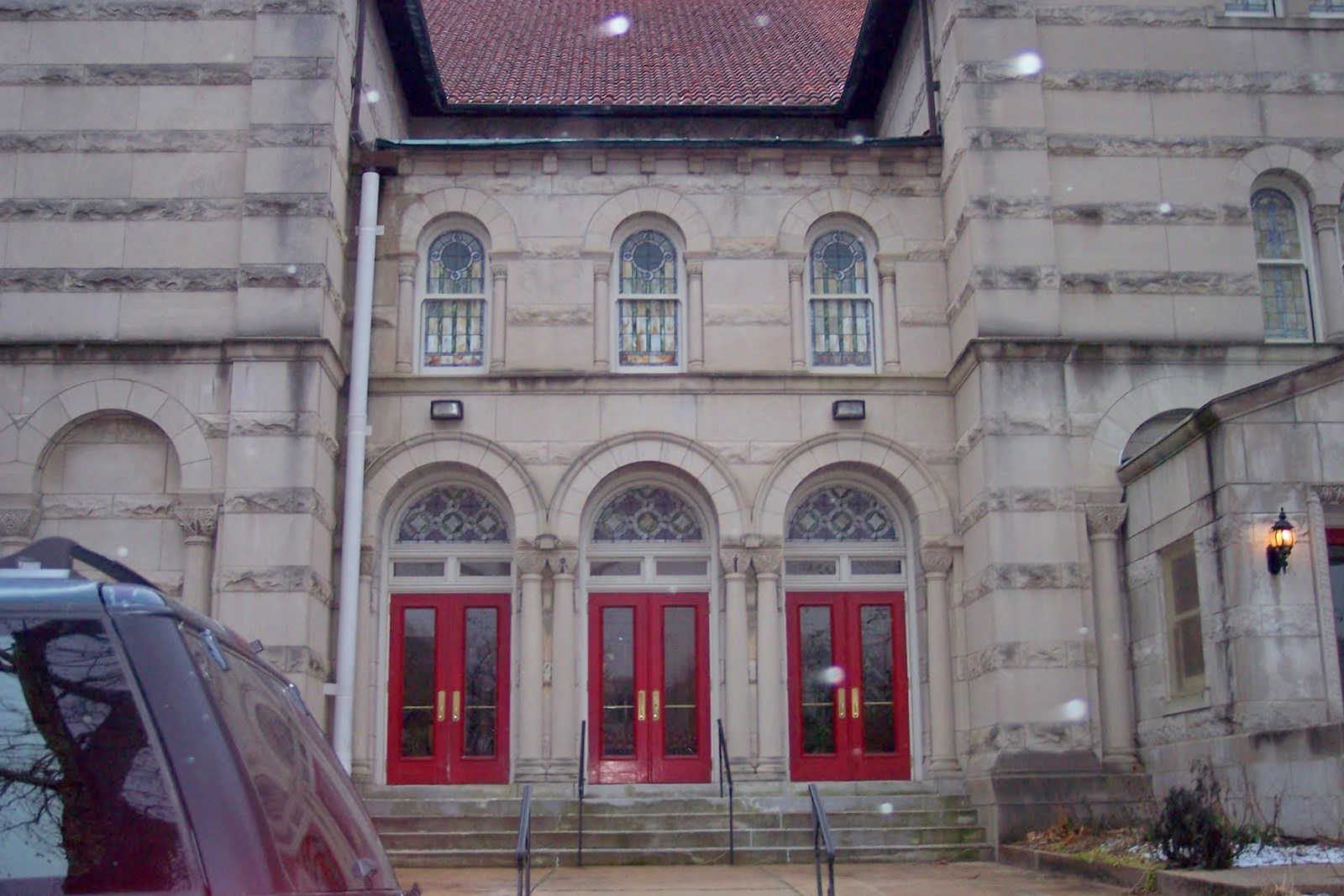 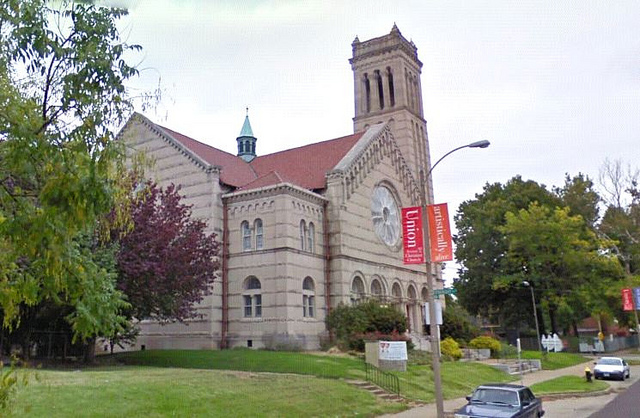 Just north of there on Union is this mansion (check out the butlers quarters above the garage): 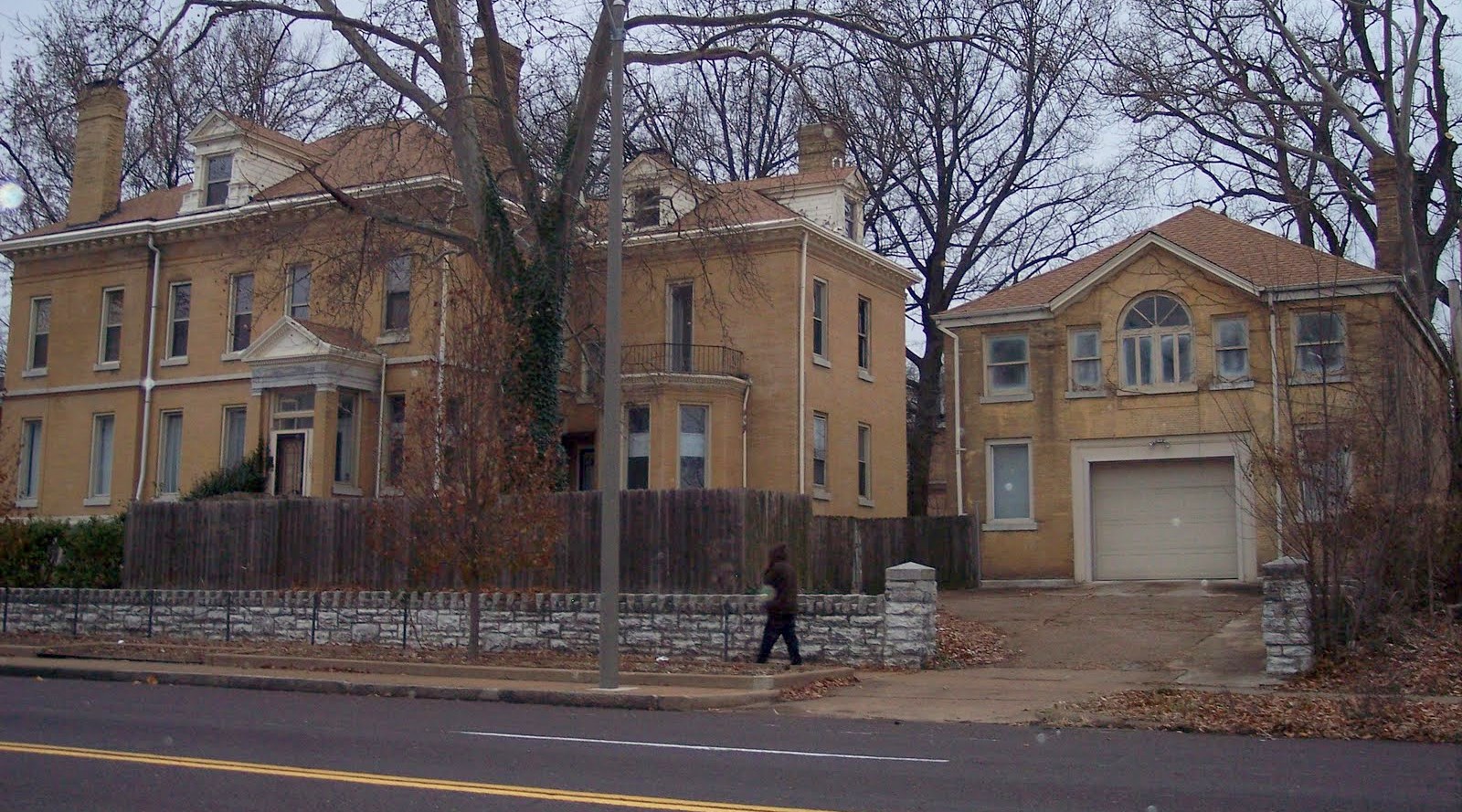 There are some massive apartment complexes, which are quite handsome but look like trouble. Meaning, lots of trash, glass, and broken down vehicles, etc. 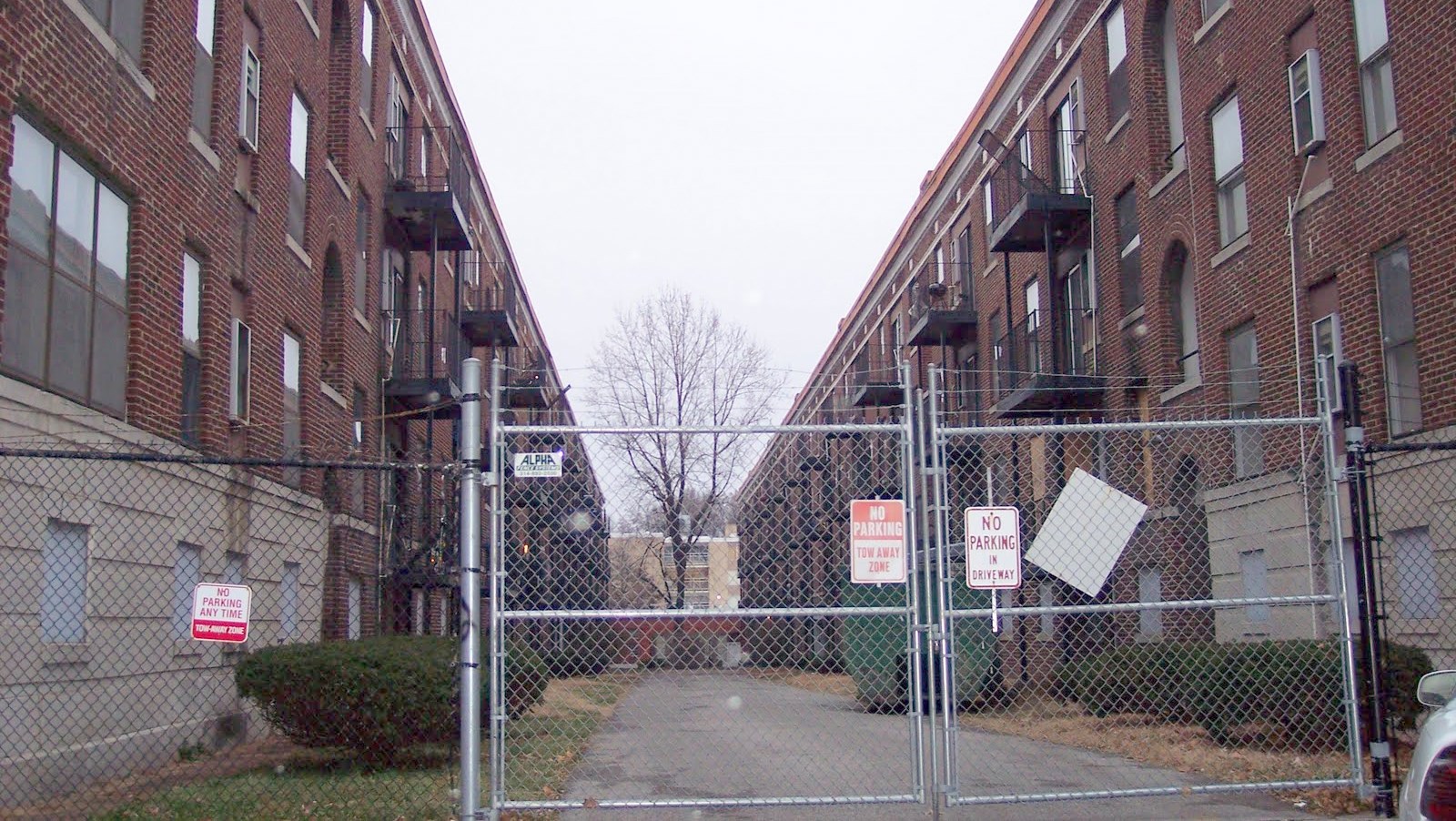 Now on to the 3 most curious properties I encountered. I was fascinated with each of these. The first because of the crazy configuration of these turrets (or whatever they are called) and the entry way under the apartment complex. This place is utterly fascinating to me and would be a great addition to many of the upscale St. Louis neighborhoods. 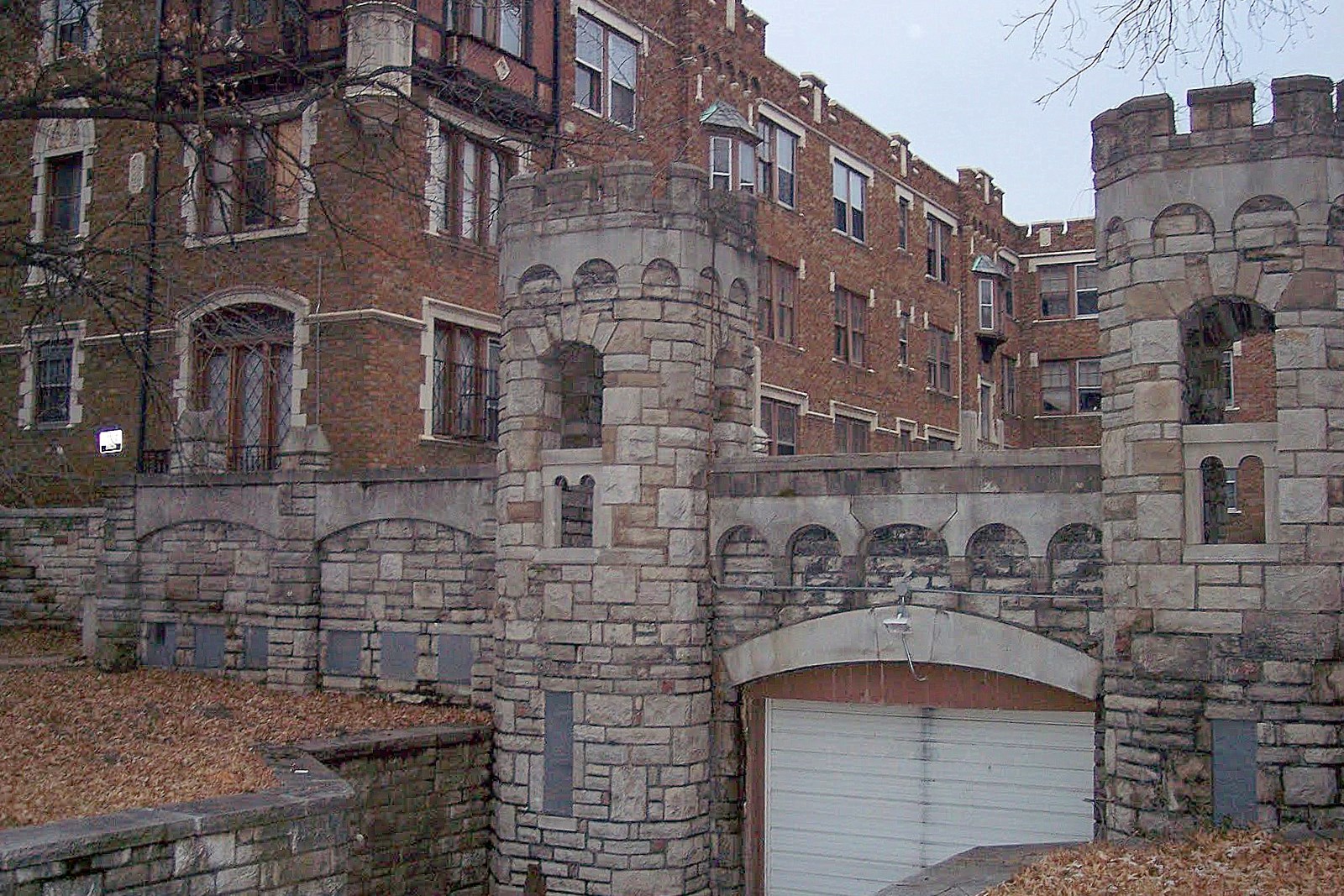 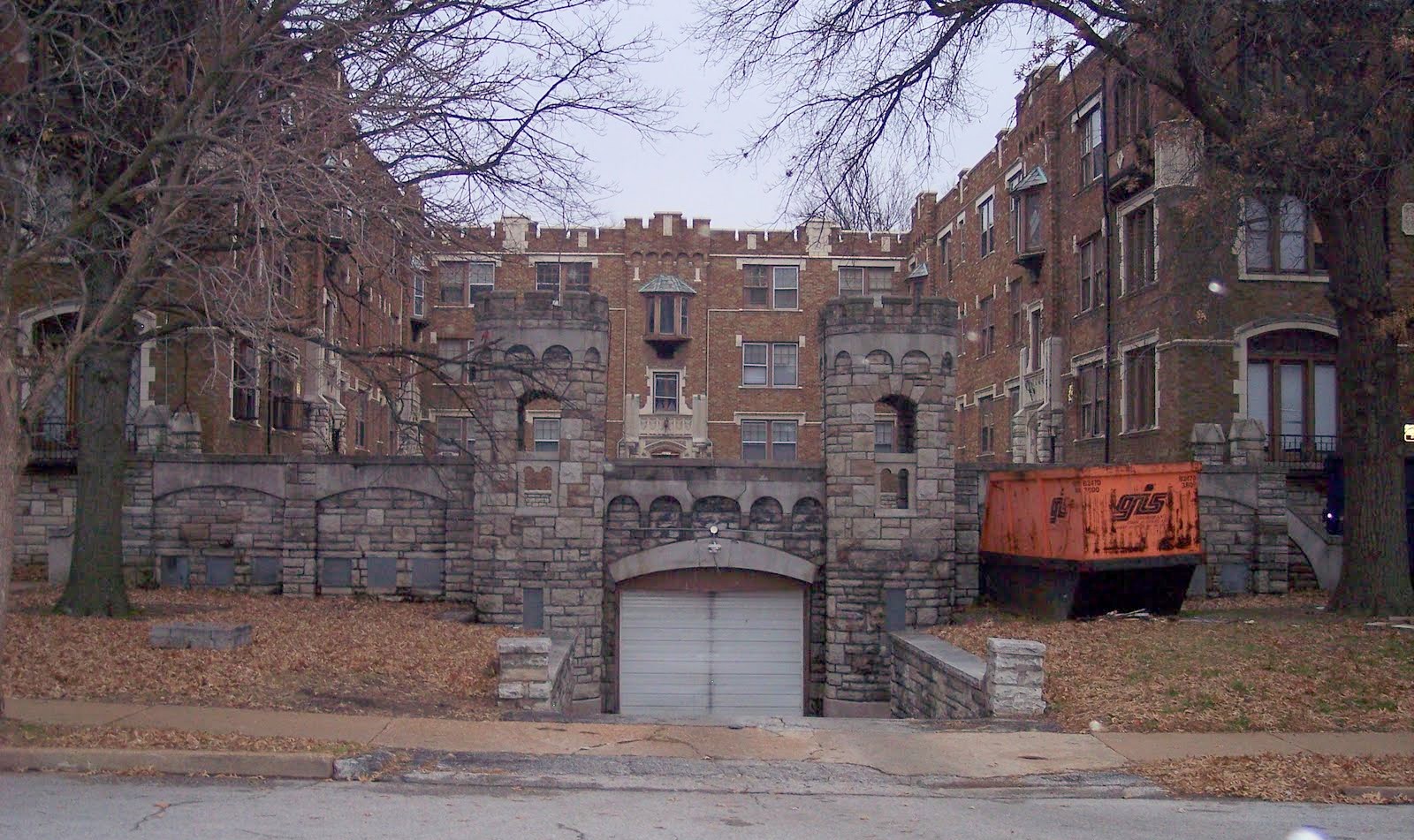 The second was the huge gated complex called Roberts Place: 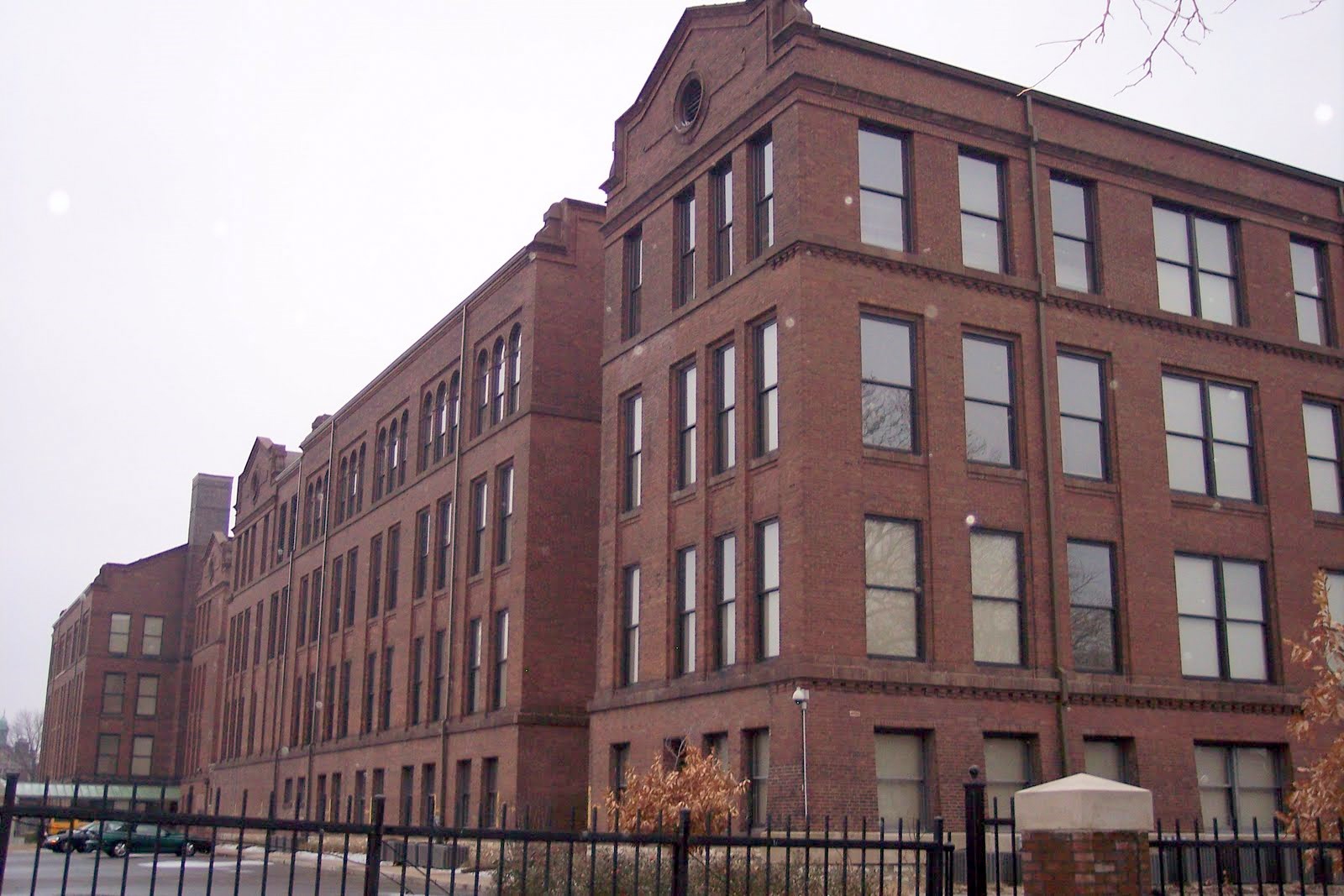 I couldn’t figure out what this was. Turns out after a little research, it’s the Roberts Place Lofts. The building was built in 1905 by Wash U to house it’s Manual Training School and Smith Academy which later became Enright Elementary School. This an AMAZING reuse of an academic building and should be a model for what can be done with many of the underutilized or simply vacant school buildings in St. Louis.

The third was where there was most activity (bustling with people in and out) called the Winston Churchill Apartments. Thankfully I just checked in to Ecology of Absence who posted a fantastic summary of this massive success story. 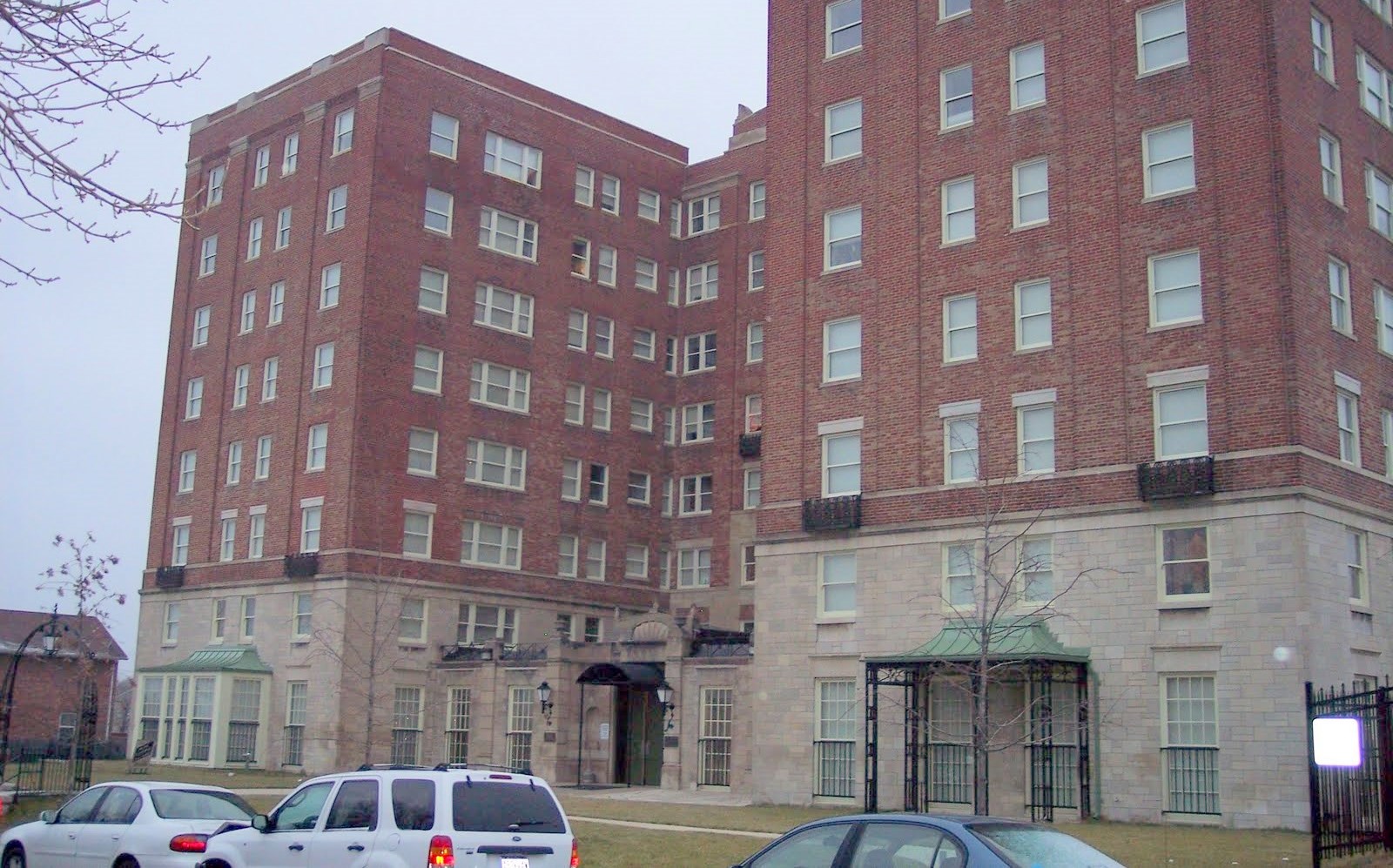 If you live here, or know this neighborhood and my observations seem unbalanced or swayed in any direction, please add your 2 cents & correct me or add to the analysis of the neighborhood. Most of the south and central neighborhoods are home to friends, family, businesses and other places I frequent. The north side has very few services and businesses that I can’t find closer to home, so in many cases this will be my first time stepping foot in these neighborhoods. And in this case, my 3 year old fell asleep in the car, so we couldn’t walk and all these amateur shots are from the front seat of my car.

I’ve come to appreciate and admire yet another neighborhood of my fair town. God bless each and every neighborhood, and may they continue to see progress. We’ve hit rock bottom friends, the future seems bright for Visitation Park. With Windermere Place being added to the local historic district, the Winston Churchill Apartments renovation, the Soldan magnet school and a mild increase in population, things look good.